Intersection of Race and Guns in Schools: Resources for Teaching in These Times - NCTE
Back to Blog 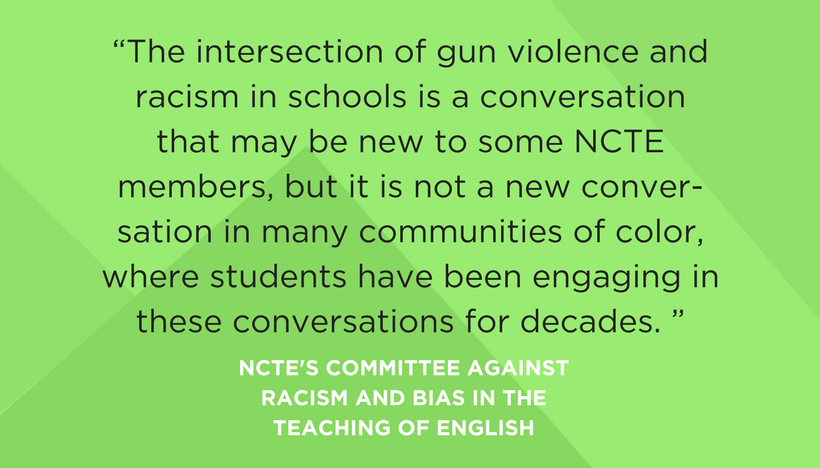 This blog was written by the NCTE Committee Against Racism and Bias in the Teaching of English.

The members of the Committee Against Racism and Bias have been closely watching the rhetoric surrounding gun violence in schools because we know that its intersection with racism affects all of our students. Yolanda Whitted shared what the March for Our Lives meant to her in a timely blog post that speaks to the gun violence that has plagued our country and our schools. Inspired by Yolanda and teachers like her, we would like to offer additional resources and continued dialogue with teachers who are committed to nonviolence and conflict resolution and with those who worry about the “hardening” of schools, which escalates the school-to-prison pipeline that already exists and disproportionately affects students and teachers of color.

The intersection of gun violence and racism in schools is a conversation that may be new to some NCTE members, but it is not new in many communities of color, where students have been engaging in these conversations for decades, seeking justice and demanding change. Yet often, their cries have fallen on deaf ears. Students in Baltimore and Ferguson raised cries of alarm and calls for action and justice when their communities were literally under fire. Parkland students, in turn, have attempted to share their spotlight more widely with attempts at intersectional protest. The vitriol of hate and the lies of conspiracy theories that have been spewed toward all students who speak out must be denounced.

Conversations around the intersections of race and gun violence are becoming more common in schools right now. Here we share resources and readings to help NCTE members and their students become more informed about these issues and thoughtfully navigate those important discussions.

The Hate U Give, Angie Thomas

How It Went Down, Kekla Magoon

I Am Alfonso Jones, Tony Medina

Taking Aim: Power and Pain, Teens and Guns; a collection of short stories and essays by YA Authors; edited by Michael Cart.

“America Is a Gun,” by Brian Bilston

Articles Discussing the Intersection of Guns and Race:

Black People Are Not Ignoring Black on Black Crime, The Atlantic

How a Death in Ferguson Sparked a Movement in America, CBS

Black Children Will Be the Victims of Armed Teachers, Time

Black Teens Have Been Fighting for Gun Reform for Years, Teen Vogue

The Intersection of Guns and Race, Urban Milwaukee

Is 2016 at the Intersection of Guns and Race?, The Hill

The Intersection of Policing and Race, Center for American Progress

Guns and Race: The Different Worlds of Black and White Americans, Brookings

We Need to Talk About Black Lives and Gun Violence After the Florida Shooting, HuffPost Black Voices

From Birmingham to Parkland, Celebrate the Power of Young Voices, Teaching Tolerance

How Black Americans Are Left Out of Both Sides of the Gun Debate, Vox

The Racist Origin of Gun Control Laws, The Hill

Parkland, Race, and the Gun Violence That Gets Overlooked, PBS

Black Teens Affected by Gun Violence Speak Out Ahead of March for Our Lives, HuffPost Black Voices

Arming Teachers Would Put Black and Latino Kids in Danger, The Washington Post

An American Crisis: 18 Facts about Gun Violence, and 6 Ways to Reduce the Suffering, The Trace

Parkland Is Sparking a Difficult Conversation about Race, Trauma, and Public Support, Vox

Why Race Should Be Included in the Conversation about Arming Teachers, NPR

How Do You Teach Students about Freddie Gray? Slate

How Many Children Are Affected by Gun Violence in America?, The Washington Post

Five Things for Educators to Keep in Mind After March for Our Lives, Southern Poverty Law Center

Our Victories, Moms Demand Action on Gun Sense in America

Speeches from students at March for Our Lives