Trigger Warnings Threaten Our Students’ Learning - NCTE
Back to Blog 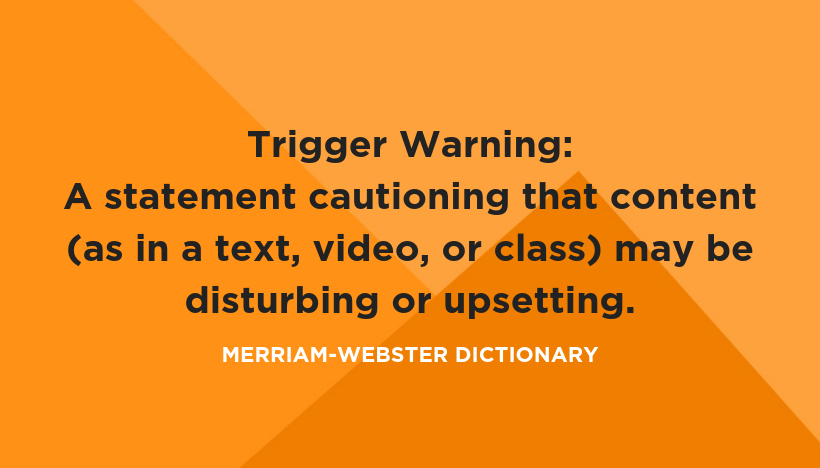 In his article in the September English Journal, Adam Wolfsdorf tells us that “When It Comes To High School English, Let’s Put Away The Triggers.” He notes,

It’s hard to imagine a single literary text worth teaching to high school students that doesn’t delve deeply into some controversial topic.

The second, The Coddling of the American Mind, a book by Greg Lukianoff, FIRE President and CEO, and Jonathan Haidt, Thomas Cooley Professor of Ethical Leadership at New York University’s Stern School of Business, who note,

This new culture of “safetyism,” fear of hurting students with conflicting ideas, is anything but safe.

[T]hree terrible ideas . . . have become increasingly woven into American childhood and education: What doesn’t kill you makes you weaker; always trust your feelings; and life is a battle between good people and evil people. These three Great Untruths contradict basic psychological principles about well-being and ancient wisdom from many cultures. Embracing these untruths—and the resulting culture of safetyism—interferes with young people’s social, emotional, and intellectual development. It makes it harder for them to become autonomous adults who are able to navigate the bumpy road of life.

Despite intentions, trigger warnings are another way of Red-Flagging, reducing “complex literary works to a few isolated features.”

Though often well-intended, trigger warnings in fact pose serious threats to the adolescent reading process. Almost any reading stance promoted by many of the prominent literary scholars of the past century—John Dewey, Louise M. Rosenblatt, James Moffett, Maxine Greene, Sheridan Blau, Ruth Vinz—requires that the student be capable of relating the self to the author’s text in an experiential manner. . . . Trigger warnings can interfere with aesthetic reading by promoting caution rather than risk-taking.

So, if we don’t include trigger warnings, what do we do?

maintaining a positive attitude toward students, encouraging them to feel respected and acknowledged, responding to them empathically when they seem shaken, and having a plan in place with the school’s guidance department, should a student get triggered and need intervention.

Teaching English to adolescents also requires courage, a willingness to take the type of risks that promote resilience and enhance self-efficacy and autonomy. Part of the way that English teachers can do this is by helping students to enter into rich aesthetic engagement with literature. If we hold back, walk on eggshells, or shy away from full participation, we may unwittingly be teaching our students fear. But if we believe in literature’s innate therapeutic benefits, we just might find that there’s more value to a text when it’s fully loaded.

For more on trigger warnings, see

Build Your Stack: Books Save Lives
Learning Isn’t Supposed to Be “Safe”
Where Is the Understanding?
Guidelines for Selection of Materials in English Language Arts Programs