The Critical Arts Project: Using Story to Critically Engage with Artforms - NCTE
Back to Blog 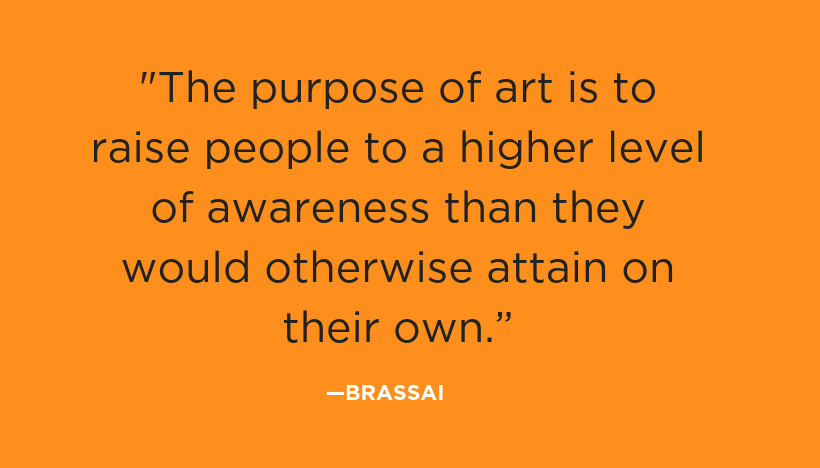 The following post was written by Mary L. Fahrenbruck and is part of an ongoing series from the NCTE Standing Committee on Global Citizenship.

The purpose of art is to raise people to a higher level of awareness than they would otherwise attain on their own. —Brassai

I’m afraid of art. I don’t know what to do when I look at a painting, a photograph, or a sculpture. I feel like I’m missing that higher level of awareness that Brassai mentions.

In graduate school I enrolled in a course entitled The Art of the Picture Book. I planned to attend so I could learn about art, a sit-and-get, I hoped. During the first class, I learned that there would be very little sitting and the only getting would come from the artwork I produced. I was expected to sketch, paint, draw, sculpt, stamp, and sew my way through the course. Because I don’t consider myself an artist in anyway, I planned to drop the course. With encouragement from the course instructor, I ended up staying.

I learned a great deal about art and about my relationship with art that semester. I learned that I enjoy drawing and sewing. I also learned that knowing the story behind a piece of art provides me with that higher level of awareness Brassai talked about.

I began to explore the stories behind the art. I found the story behind Dorothea Lange’s iconic photograph “Migrant Mother” to be compelling. Florence Owens Thompson, the woman in the photograph, told Lange before the photo shoot that she had just sold the tires from her car to buy food to feed her seven children. I don’t understand the center of interest, the color balance or the print presentation of Lange’s photograph. But I do understand story.

Using stories to approach art is a powerful strategy that educators of all grade levels and subjects can use to support intercultural understanding, a charge of the Committee on Global Citizenship.

The Critical Arts Project is one strategy that I, along with my colleague Blanca Araujo, used to engage university students in the stories behind various genres of art as a way to “challenge, disrupt, and/or counteract the multiple conditions and realities of oppression” (Vinson, 2006, p. 63).

The Critical Arts Project is straightforward, with the onus of the details residing with students. For our project assignment, we invited students to investigate one of many artistic genres including music, film, painting, sculpture, and photography. They were instructed to focus first on the genre, taking note of the works, compositions, artists, and other significant details.

We challenged students to think about ways the focus of their Projects connected to a critical, multicultural social studies (racism, sexism, social injustice, etc.). We supported their thinking with guiding questions:

Once students decided on a genre, they submitted a proposal for their projects that included the specific work of art, the project focus, a rationale for their selections, and a plan to present the projects. To help educators launch a Critical Arts Project with students,

I provide three examples that use sculpture to think critically about global connections.

Scattered throughout the United States, the sleeping Mexican figure [*resource inks in this paragraph are in Spanish] is a fitting focus of a Critical Arts Project. Students can research the origins of the figure to the sculpture of El Pensador or El Pensamiento by Columbian Artist, Rómulo Rozo. Loosely translated El Pensador means “the thinker.” Rozo’s sculpture is his expression of the intelligence and thinking of the Mexican people. The 60-centimeter stone sculpture is displayed in the Museo de Arte de La Paz in Bolivia. For this investigation, students can learn

The iconic Olympic Black Power Statue portraying Tommie Smith and John Carlos giving the Black Power salute stands in Washington Square on the campus of San Jose State University where the two athletes graduated. The statue depicts Smith and Carlos during the medal ceremony for the 200-meter race; sock-footed, heads bowed, black-gloved fists raised in protest above their heads. Moments earlier, Smith had received the gold medal for his first-place finish and Carlos the bronze medal for third place. Peter Norman, the silver medalist, from Australia, is noticeably absent from the statue. The statue symbolizes only one of several possible critical inquiries associated with the 1968 Summer Olympics and the Civil Rights Movement. Students can inquire about

The twelve-foot tall, bronze statue of Juan de Oñate depicts the conquistador riding horseback, presumably up the Camino Real on his expedition to claim the territory of what is now New Mexico for Spain. New Mexico’s first governor is both revered for his accomplishments and reviled for his methods of governing.

At a time when Americans are questioning the display of Confederate statues, statues of others such as Juan de Oñate deserve questioning as well. Students can inquire about

Try this powerful approach and support both student learning and intercultural understanding!

Interested in reading more from the NCTE Standing Committee on Global Citizenship?