A Free Press Begins at School - NCTE
Back to Blog 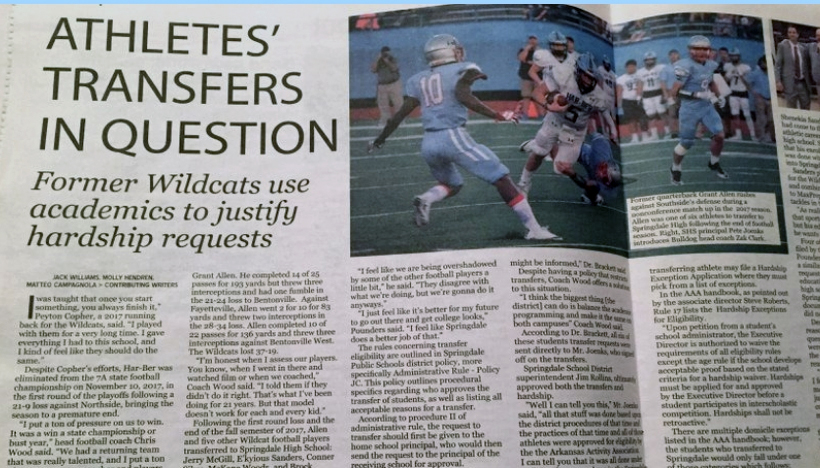 Last week NCTE joined a number of First Amendment groups to sign on a letter with the Student Press Law Center (SPLC) in support of the student journalists and their adviser of the student newspaper at Har-Ber High School in the Springfield District, Arkansas.

According to the letter, here’s what happened:

Student journalists at the Har-Ber Herald investigated the circumstances surrounding the transfer of six varsity football players from their school to a rival high school in the middle of the 2017 school year. After months of research, on October 30, 2018, the Herald published its investigation in the form of a news story, including interviews with the athletes involved. The story explored whether the athletes’ transfer complied with school district policy. The story found significant inconsistencies and included on-the-record comments from the transferring students explaining that the real reason for their transfer was related to the football program. The students also published an accompanying editorial.

After the story broke, there was a significant backlash from some in the community. School district officials demanded that the Herald’s faculty adviser, Karla Sprague, remove the story from the school website. Ms. Sprague complied, then later attempted to get the district to repost the story and editorial. Last week, [the district] wrote a letter to Ms. Sprague telling her that the story and editorial would not be republished because it was “intentionally negative, demeaning, derogatory, hurtful and potentially harmful to the students addressed in those articles.” [The district] also asserted that the article was disruptive to the school district. The next day, Principal Paul Griep announced that the Herald was suspended from regular publishing while the school district writes new protocols for student publications. He also told Ms. Sprague that while the policies are being re-written nothing could be printed or posted online without prior review by the school authorities. The principal threatened that if the Herald violated the gag order and continued to publish, Ms. Sprague would be disciplined and possibly terminated.

While the district relented and allowed the story to run after the incident made national news sources such as Buzzfeed and AP News, there is still a danger that the new policies the district has promised to develop will take away the student journalists’ freedom of press. Along with SPLC, we’ll be watching.

Note that despite the district’s thinking that they can censor student journalists,

Arkansas is one of 14 states that have passed a specific law granting student journalists legal protections beyond those required by the First Amendment [something NCTE supports]. The Arkansas Student Publications Act, ACA Sec. 6-18-1201-1204, was enacted in 1995 specifically to prevent what is now happening at Har-Ber High School. The law protects the right of student journalists to publish news absent a showing that the material is unlawful (e.g., libelous, obscene, etc.) or seriously disruptive to normal school activities.

For complete information on the incident, check out the article on the SPLC website.