What Does It Mean to Be a Teen? - NCTE
Back to Blog 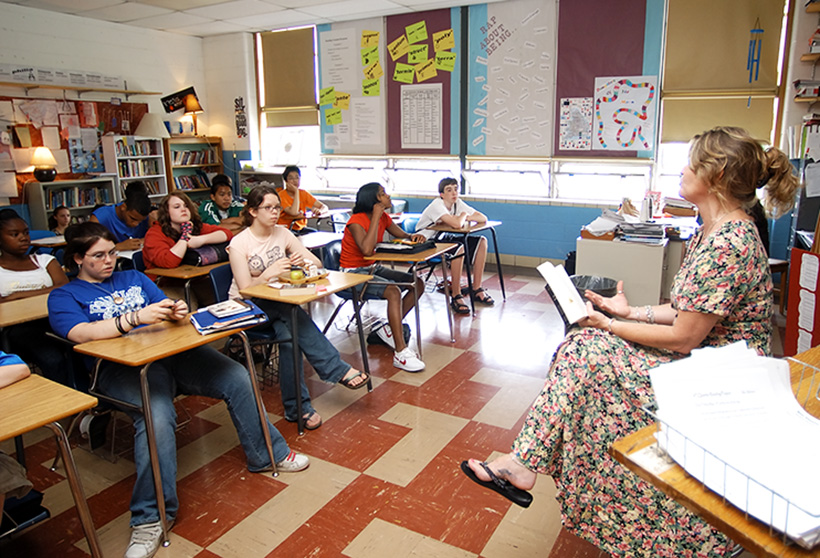 An excerpt from this article by Lorna Collier appears in the December 2018 Council Chronicle.

How “Rethinking Adolescence” Can Improve Your Teaching

Think teen or tween and what words come to mind? Hormonal, moody, impulsive, narcissistic, idealistic and rebellious, perhaps? How about identity-seeking, peer-obsessed, and parent-avoiding?

When English educators Robert Petrone, Sophia Sarigianides, and Mark Lewis talk to veteran and preservice teachers, they ask them to describe adolescents. Often, they hear words that portray teens in a mostly negative light, including certain common stereotypes.

Teachers aren’t the only ones to hold such views.

The attitudes are pervasive—and arguably even worse—throughout pop culture and among the general public, notes Lewis, associate professor of literacy education at Loyola University in Maryland. He first noticed this when, as a middle school teacher, he would mention his occupation. People would be aghast, suggesting that his students were “some sort of creatures we couldn’t work with” and that his workdays must be “horrible,” says Lewis. Yet he found his students to be a joy—thoughtful, introspective, caring, and empathetic.

Petrone, associate professor of English education at the University of Missouri, has encountered similar attitudes about high schoolers, again in contradiction with his experiences. Or he’s been warned that if he has a child, “it’s like, ‘Oh my God, wait until he’s a teenager’. . . . We would never talk about a whole group of other people that way, with such ease,” he says.

Petrone, Lewis, and Sarigianides, associate professor of English education at Westfield State University in Massachusetts, have studied how adolescents are perceived, and how this mostly negative construct of adolescence affects the teaching of English language arts.

The trio’s book, Rethinking the “Adolescent” in Adolescent Literacy (NCTE, 2017), explores how teachers can use this awareness to improve teaching to teens.

Yet such beliefs ignore wide differences among adolescents, including those of race, class, gender, sexuality, and culture, say Sarigianides, Petrone, and Lewis.

For example, students who aren’t from upper or middle classes may have to care for siblings or work to support the family, and don’t have the luxury of as-seen-on-TV carefree teen lives.

Sarigianides grew up the child of Greek immigrants and was similarly shut out of stereotypical middle-class adolescence. “I was super-responsible as a kid; I worked from high school on: weekends, vacations, everything. In some ways, I had access to a typical white American adolescence, but I knew in other ways I wasn’t allowed to have that.”

The current construct of adolescence is relatively recent, Lewis says. “How people thought about what it meant to be 15 or 16 in the 1800s is much different than it is now.” Then, teens often held down responsible jobs; age-based universal education wasn’t yet the common practice.

Today’s stereotypes surrounding adolescence can cause problems for both students and teachers, says Lewis. Students may think they are supposed to behave in a certain way—and wonder what’s wrong with them if they don’t.

Teachers, especially new ones, may focus overmuch on classroom management in anticipation of having to rein in a pack of unruly teens.

On the other hand, when the stereotypes are made visible, teens and teachers benefit in several ways. Teens may realize they are OK after all, while teachers may find that their students are capable of more than they expected.

“The way English teachers think about the students in front of them matters greatly,” says Sarigianides. When teachers are willing to discuss adolescence as a relatively recent, historically constructed category, “it opens up fresh ways for youth to see themselves, to function in our classes, to function in the world.”

One challenge for teachers is how to teach with this awareness given the pervasiveness of the adolescent construct in literature.

“If you read YAL [young adult literature] aimed at middle-school teens, there’s a lot of angst, not fitting in, and rebelling,” Lewis says. “It’s very typical and I would say poor middle school YAL.”

Fortunately, more positive YAL does exist, he says. Examples of books with less stereotypical renderings of teen characters, says Lewis, include Homeland and Little Brother by Cory Doctorow and Elsewhere by Gabrielle Zevin.

Other titles to consider, which are discussed in Rethinking the “Adolescent” in Adolescent Literacy, include Weetzie Bat, by Francesca Lia Block, and Aristotle and Dante Discover the Secrets of the Universe, by Benjamin Alire Sáenz.

“I think the best YA writing . . . operates under the idea that these are real people and not this age-based category,” says Sarigianides. Young adult books she’s liked recently include We Were Liars by E. Lockhart and Out of Darkness by Ashley Hope Perez.

Literature that isn’t positive or that is stereotypical can still be presented to students, the authors say, but teachers can use a “youth lens” to critically examine an author’s assumptions about adolescents and how these affect the text.

Responses so far? Most students “love it,” says Sarigianides, who has been teaching this since 2006.

Teachers’ reactions have been more mixed. “The preservice teachers often resist,” says Lewis. “I have a lot who walk out of my college classrooms who will not and haven’t changed their minds yet.”

One issue: “They’ve just taken educational psychology that told them over and over again what adolescents are like, and then here I come with a social constructionist view. It’s hard for them to marry the two.”

Yet Lewis, Petrone, and Sarigianides note that science about youth development isn’t the be-all and end-all of understanding how adolescents operate. Research about the “teen brain,” says Petrone, “does not often account for the many, many young people for whom these ‘truths’ do not hold true.”

What’s most important, says Petrone, is for teachers to recognize how experiences of adolescence vary—and for teachers “to reflect upon the filters or lenses they are using to come to know young people. . . .”

“Young people are typically more capable and able than many of our public institutions, particularly schools, give them credit for or allow them to be.”

Lorna Collier’s articles about education and technology have appeared in US News & World Report, the Chicago Tribune, and MSN.com. Reach her at Lorna@LornaCollier.com