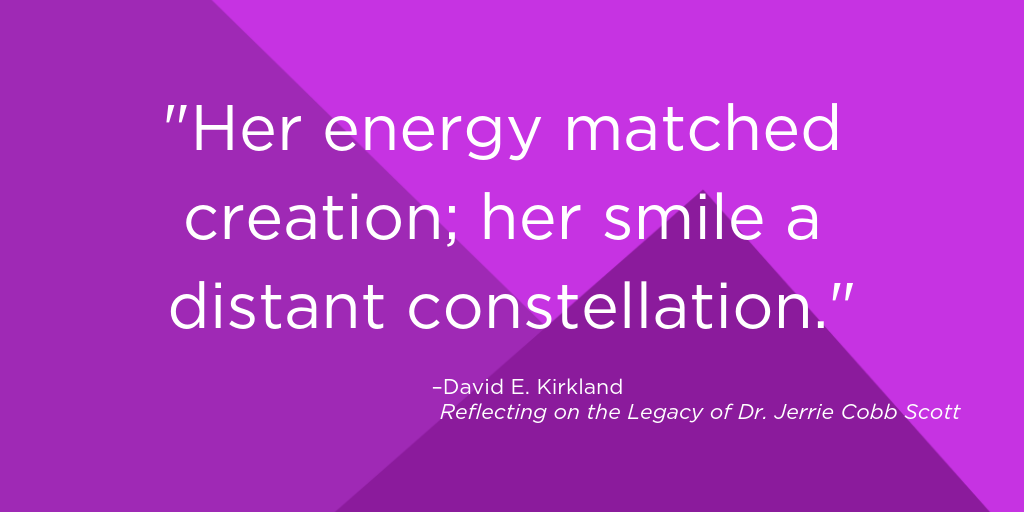 The following post was written by Stephanie Power-Carter, Indiana University and David E. Kirkland, NYU. Find out how to participate in the African American Read-In here.

We were in Detroit . . .  She stood with a humble, Southern-articulate grace. Her heavy hands heaved the miraculous and tender stories of a history too often defiled. I believe she was expressing the humble histories of our cause, speaking of Black language in Black language and getting everyone to read books by Black authors and/or about Black people. And though she stood close to the floor, her presence had the rhythm of the wind, which leapt to the ceiling. Stilted, she rose like the unfolding arms of sunrays or the brisk, comfortable laughter and bellows of Black bellies soaring past bondage. Her energy matched creation, her smile a distant constellation.

David E. Kirkland, from a message to NCTE/CCCC Black Caucus (2017) David’s words capture much about the Jerrie Cobb Scott we knew. Jerrie was full of life, wisdom, and “mother wit.” We both met Jerrie over a decade ago at NCTE Black Caucus meetings. However, as a young scholar, Stephanie can recall connecting with Jerrie a bit differently than David. While they were generations apart, Stephanie and Jerrie were both Southern women. Stephanie remembers most how both of them would randomly stumble upon each other at NCTE meetings and sessions; sometimes they had the most intense conversations without ever literally saying a word. One gesture—the tilt of a head, the eyebrow lift and a little grumble or grunt—spoke volumes.

In Caucus meetings, we all would erupt into deep conversations. Hugs spoke a language of their own, and laughter translated our connection. When we heard of her passing now close to two years ago, it was like waves of memories crashing against the shores of certainty. It was somehow soothing yet distressing recalling moments with Jerrie. Strangely, we both felt caught in a time warp—traveling through a nexus of vivid memories and interactions that seemed like they had happened yesterday. Yet we realize that it has been a few years since we have actually spoken to Jerrie. Her passing, for us, sits in silence and remains frozen in speechlessness.

We are all prone to forgetting, even when memories crystallize in the consciousness, and winds of the past whisper into the present. We also know that memories are neither neutral nor innocent. The work of Black women often falls into the shadows of history and gets lost there. That’s why we decided to write.

Every February, NCTE commemorates books written by Black authors that elevate Black experiences. We call this event, this annual commemoration of Black letters, the African American Read-In. It was Jerrie’s baby. She gave birth to it. Carried it. Raised it. Nurtured it. Sustained its life.

Now each year, hundreds of thousands of people—in bookstores and coffee shops, in faith-based institutions and prisons, in living rooms and in kitchens and anywhere else people gather—dedicate time in February (Black History Month) to explore Black literature (old and new). The gathering is more than a revolutionary act. It is one of restitution, of a nation taking an important step to reclaim its troubled past and learn about lives (real and fictive) that we, in this country, have rarely valued.

We had such visceral reactions to Jerrie’s passing. However, we both realized that even in distance and time, we, like many others who knew her, felt like Jerrie was right here with us, and every February, she personally stopped by and visited a little while. Our local African American Read-In programs embody Jerrie’s spirit, tenacity, and her commitment to Black literacy and literature.

Although Jerrie is no longer with us, through the African American Read-In, she lives. We can and must continue to honor and build on her legacy. In a 2014 interview, she explained that one of her goals was “to get young people engaged, one of the things they need is to see themselves in books. They need to know that some of the characters are African-Americans, just like some of them are. It is important for all of us to see ourselves in books because that encourages us to read in a different way and encourages us to write more.” Jerrie’s words continue to be timely, especially during this moment in our history when the denigration of Black culture, of Black women, and of Black people seems publicly acceptable. The African American Read-In is not just about literature; it is about sharing what it’s like to be Black, locally and globally.

Maya Angelou, during an interview with the Associated Press, observed, “we owe truths not just facts . . . It is our stories and our words. I’ve certainly been exposed to many things and I’ve learned something: I owe it to you, to tell you.” Similarly, the African American Read-In is about being unapologetically Black, owning, embracing, unlearning, educating, making sure that Black voices, experiences, and stories are told and chronicled.

The African American Read-In is a powerful legacy that inextricably links us to Jerrie and each other, old and new, me and you, provoked by history, wrapped in legacy, nestled in time and distance, reading life onto pages, stages, spaces, only to discover ourselves, uncover ourselves, and walk boldly into our futures, knowing that in the beginning was the Word and the Word was . . . Eternal.

It simply means that even in death, Jerrie lives. She will always be a champion for our cause. SHE is YAWL, and US, and THEY, and THEM, and YOU, and ME, and WE. Stephanie Power-Carter is an Associate Professor at Indiana University (IU) Bloomington in the Department of Literacy, Culture, and Language Education. Her research and teaching interests include a broad range of issues covering equity and inclusion, specifically around the area of African American youth literacy and education, sociolinguistic ethnography, critical race theory, Black feminist theory, research on whiteness, and critical discourse analysis. She can be reached by email at: stecarte@indiana.edu. David E. Kirkland is the Executive Director of the NYU Metropolitan Center for Research on Equity and the Transformation of Schools, and an associate professor of English and urban education at New York University. Dr. Kirkland can be reached by email at: davidekirkland@gmail.com.