From Award to Challenge - NCTE
Back to Blog 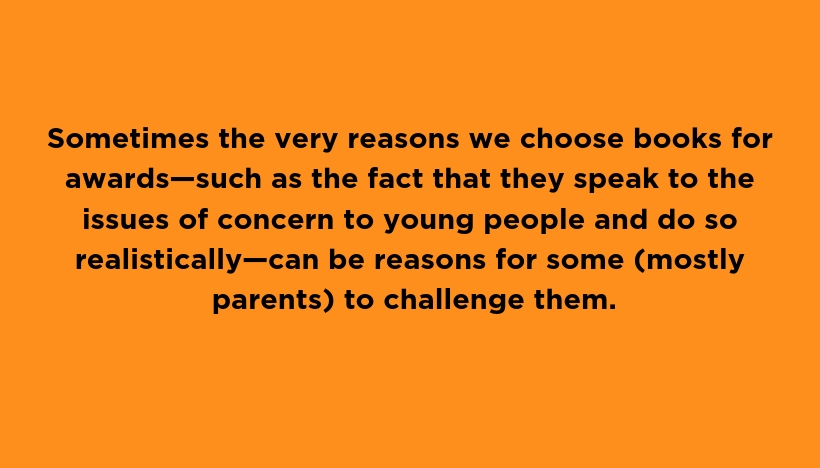 Last week at its Midwinter Conference, ALA announced the 2019 winners of its many book awards, including the Newbery, Coretta Scott King, Michael L. Printz, and Alex Awards. One thing about books that receive these awards is that some of them will find their ways into our school and class libraries and into our classrooms.  This is a great thing—students deserve access to these books! The down side, though, is that sometimes the very reasons we choose the books for the awards—such as the fact that they speak to the issues of concern to young people and do so realistically—can be reasons for some (mostly parents) to challenge them.

This year’s awards list, as with all years’ lists, is a powerful one, and I’m not going to offer predictions about which titles might be taught, shelved, or challenged. Rather, let’s look at lists since the turn of the century and those books which found notoriety because they were books cited in challenges reported to NCTE since 2002.

My guess is that you know most all of these texts, but, if not, the list below would make a perfect reading list for you and your students. Note that by far complaints against these texts were about sexual scenes. There were also complaints about profanity and subject matter (e.g. “too dark”). NCTE has rationales for some of these, so if you decide to put them into your library or to teach them, do request up to five rationales to help you construct your own class- or school-specific rationales for including the texts. .

Newbery Awards and Honor Book designations are given annually by the Association for Library Service to Children, a division of the American Library Association, to the authors of some of the most distinguished contributions to American literature for children. Newbery books that have been challenged include:

Alex Awards are given to ten books written for adults that have special appeal to young adults, ages 12 through 18 years. The following Alex awardees have been challenged: