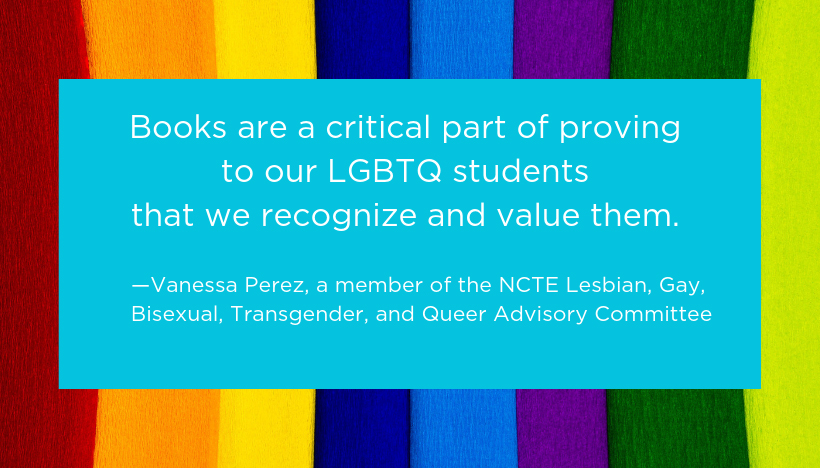 This blog was written by NCTE member Vanessa Perez, a member of the NCTE Lesbian, Gay, Bisexual, Transgender, and Queer Advisory Committee.

Four of the top ten books on the American Library Association’s Most Challenged list are included due to having LGBTQ characters. Declaring a book with LGBTQ characters inappropriate for school is the same as declaring LGBTQ students and families inappropriate for school. It sends the message, “You don’t belong here. We’ll remove this book and we’ll try to remove you, too.”

According to the Trevor Project, an organization providing crisis intervention and suicide prevention services to lesbian, gay, bisexual, transgender, queer, and questioning young people, the facts are that LGBTQ youth are more likely to contemplate suicide, more likely to make suicide attempts requiring medical treatment, and more likely to self-harm when harassed or abused. However, educators can make a difference—they can defend and protect students through acceptance: “You belong here with us. We see you and your life matters.”

Books are a critical part of proving to our LGBTQ students that we recognize and value them, and that we don’t question their right to exist in school or anywhere else. An individual teacher may not be able to change curriculum to include LGBTQ lives and learning, yet one teacher can choose books for a classroom or school library.

While I initially purchased award-winning books and titles recommended by students, there are many good resources to guide your collection-building, including the ALA’s Rainbow Book List and LGBTQ Reads. The more difficult problem, for me, was where to put the books in our “genre-fied” library. Student input was key, as always. While students wanted the books to be visible, they didn’t want the books segregated in a separate section or stickered with a rainbow. LGBTQ is not a genre. There are not queer romances, there are romances with queer main characters. There are not lesbian mysteries, there are mystery books with lesbian detectives. Trans students are not the only students who can or should read books with trans heroes. Put the books on the shelves, the students told me, we’ll find them.

The question isn’t whether we should have books with LGBTQ characters, the question is, how can we best share them?

In my three years as a library media specialist, I’ve found the following to be effective ways to ensure LGBTQ students know that their voices and experiences are honored:

Biography Table as part of a Book Tasting

Libraries can honor LGBTQ voices that are far too frequently marginalized in classroom spaces. Including LGBTQ texts is a simple action compared to organizing an elaborate assembly or special month celebration; it’s a normalizing, everyday action any educator can make to clearly communicate LGBTQ students belong. Vanessa Perez is the Technology Integration and Library Media Specialist for Clinton High School. She can be reached at @vperezy on Twitter.