Build Your Stack: Girl Power! Sharing the Power, Courage, and Voice of Girls - NCTE
Back to Blog 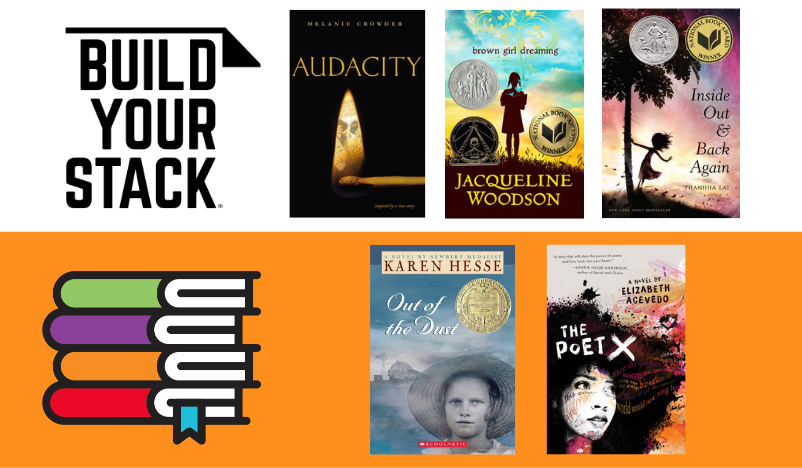 This blog post is part of Build Your Stack,® a new initiative focused exclusively on helping teachers build their book knowledge and their classroom libraries. It was written by NCTE member Tameka Woodard.

At this pivotal point in American history, through the #MeToo movement, women are using their strength of character, courage, and voices to reclaim power that has been consistently stripped from them. The following assortment of books, all written in free verse, will show that the fight for equality has been a continuous journey for women.

Beginning with the fictionalized story of Clara Lemlich, a Russian Jewish immigrant in the early 1900s, and progressing to the realistic fiction novel about Xiomara Batiste, a young Afro-Latina struggling with questions of religious identity in our present day, students will find a common thread of inequality in women’s issues and see the different ways the protagonists work to seek solutions.

Also included is a memoir from Jacqueline Woodson, showing how she struggled with reading but refused to allow this to hold back her gift of writing. Billie Jo and Ha round out the leading characters as two young girls making their way and refusing to give up when life proves to be utterly challenging.

This stack of books reflects a wide range of girls’ voices and historical settings and will leave students feeling strong and empowered.

Audacity by Melanie Crowder
Young Clara Lemlich emigrated from Russia and ended up in a worse situation. As she looked around, she realized that factory working conditions were horrible. Clara used her voice and strength and ended up leading the largest women’s strike in history.

Brown Girl Dreaming by Jacqueline Woodson
In this memoir, Jacqueline Woodson shows us how she grew her voice as a writer through the turbulent years of the 1960s and 1970s. Woodson’s free verse stories show what it was like to grow up as a young African American girl during the Civil Rights Movement.

Inside Out and Back Again by Thanha Lai
The first poem in Thanha Lai’s book Inside Out and Back Again immediately draws readers in, when Ha disobeys her mother and shows her fiery spirit. Ha is a young girl growing up in a village she loves when everything changes due to the Vietnam War. Now she is a refugee who has to learn a new life in Alabama. Ha discovers how different she is when she goes to school and the English-speaking students begin to tease her for her uniqueness.

Out of the Dust by Karen Hesse
“I got burned, bad.” This is one of the searing lines from Out of the Dust that will stay with me always. During the years of the Dust Bowl, Billie Jo worked hard to keep her family together after a horrible accident nearly devastated them. Billie Jo’s strength and determination through tough times shine throughout Karen Hesse’s free verse novel.

The Poet X by Elizabeth Acevedo
Xiomara Batiste feels as though she will spend her entire life fighting. She fights to protect her twin brother who will not fight for himself and she fights boys who disrespect her body and believe they are allowed to touch her whenever they want. She also struggles at home with her highly religious mother as she begins to question her own faith.

Any combination of these books could be helpful in leading students into dialogues about seeking identity. Tameka Woodard attended the University of North Carolina-Greensboro earning a bachelor of science in middle grades education with a concentration in English and history. She earned her masters of arts in school administration from Gardner Webb University. Tameka currently works at Charlotte Country Day Middle School as the director of studies.