Build Your Stack: Roses "That Grew from Concrete" - NCTE
Back to Blog 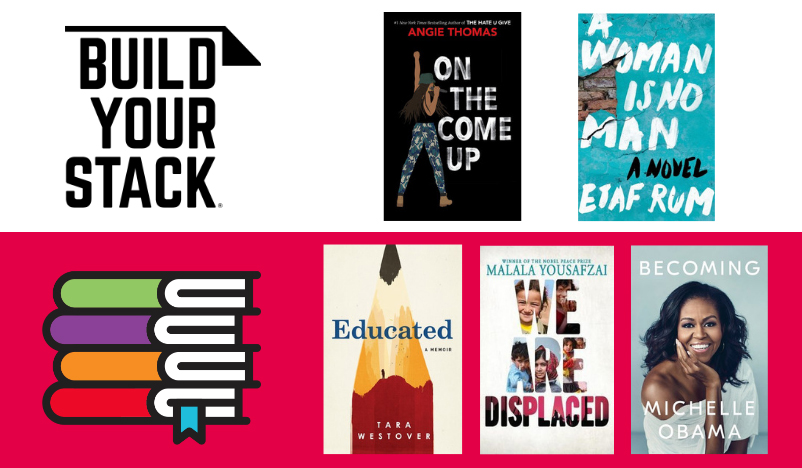 This blog post is part of Build Your Stack,® a new initiative focused exclusively on helping teachers build their book knowledge and their classroom libraries. This post was written by NCTE member Deirdre DeLoatch.

Giving voice to women and girls is an imperative in a world in which women are silenced and often either discouraged or culturally prohibited from receiving an education. Authors Angie Thomas, Tara Westover, Etaf Rum, Michelle Obama, and Malala Yousafzai through their depictions of women in dogged fights for education and gender and racial equality, demonstrate both a woman’s resolve and her resilience when pursuing her dreams and goals.

Borrowing an image from Tupac Shakur’s book of poetry, A Rose that Grew From Concrete (his work is referenced in On the Come Up), the women in these books are all roses that “grew from concrete”—and these selections all describe how something great can come from a hard place. Angie Thomas, in On the Come Up, has a strong protagonist, Bri, destined for success in a field dominated by men. Bri, a rapper, is from a family that is resilient. There are setbacks, but education is at the forefront of the family. Using the words from Langston Hughes’ Harlem, their dreams do not “sag like a heavy load.” Thomas, through Bri, addresses real world issues such as harsh school discipline leveled at children of color, labels, drugs, eviction, sexuality, and stereotypes. This bildungsroman depicts how Bri, her friends, and her family grapple with challenges, decision making, and personal responsibility. Will everything come up roses for Bri? How will she become a rose that grew from concrete? On the Come Up is developmentally appropriate for ninth-grade students and older. Tara Westover, in her memoir Educated, illustrates the unconventional childhood that she experienced at the hands of her parents. She was reared in a household in which she was neither homeschooled nor enrolled in a traditional school. “Reckless” would be an understatement when describing her father’s actions and his desire to give his daughter an unorthodox childhood and limited contact with the outside world. Westover, however, wanted an education. The odds were against her, but she found a way to pursue it, accomplishing much more than she could have expected. Read the book to find out the steps she took and what she ultimately had to leave behind to accomplish what seemed impossible. Westover became that rose that not only grew from concrete, but flourished. Educated is developmentally appropriate for students in high school and for those seeking to work through barriers placed upon them. Eleventh- and twelfth-graders especially will benefit from reading this text. Etaf Rum’s debut novel, A Woman Is No Man, depicts the barriers that Arab Islamic women face to receiving an education and to making marital decisions for themselves. Several women in the text take different paths toward voicing their objections to their oppression. The decisions that they make, however, are not without consequences. Read this book to find out how their courage, tenacity, and strength helped them to take a stand and make decisions for themselves. Read to find out how they began breathing fresh air and speaking truth to power. A Woman is No Man is appropriate for eleventh- and twelfth-graders navigating cultural or societal norms. Becoming, by Michelle Obama, illustrates how women are becoming everything that they desire—activists,  attorneys, global citizens, and more. Obama is the epitome of what one can achieve when the right tools are placed in one’s hands. She reflects on her childhood, her education, her supportive family, and yes, her husband, Barack Obama. Opining on issues she faced as first lady, she addresses the life difficulties that resulted in this rose pushing its way through the “concrete.” Read her book to find out how she gives voice to the issues many of us face. Becoming is applicable to all students at the high school level, but it is especially applicable for those students embarking on new challenges in life. Lastly, Malala Yousafzai, in We Are Displaced, conveys, through her own personal story and that of others, how it feels to be displaced from one’s home through either civil conflict or war. The women in this text discuss the bittersweet emotions of leaving their homes and living in new locations. These women fight for their own education and that of other women. This text is deeply moving and subtly gives us a call to action. Using words from Harlem, these roses’ dreams crusted and sugared over “like a syrupy sweet.” We Are Displaced is a text appropriate for all high school and middle school students and is essential for teachers desiring to develop a global learning curriculum.

Although these texts are written by women and about women, some of them also portray a positive role that a man can and should have in a woman’s life. Both young women and young men have much to learn from reading these texts.

Extra! Extra! Read all about them! Deirdre DeLoatch is a peer collaborative teacher leader at Cultural Academy for the Arts and Sciences in Brooklyn, New York. She leads both the Advanced Placement Program and the Pre-AP Program.