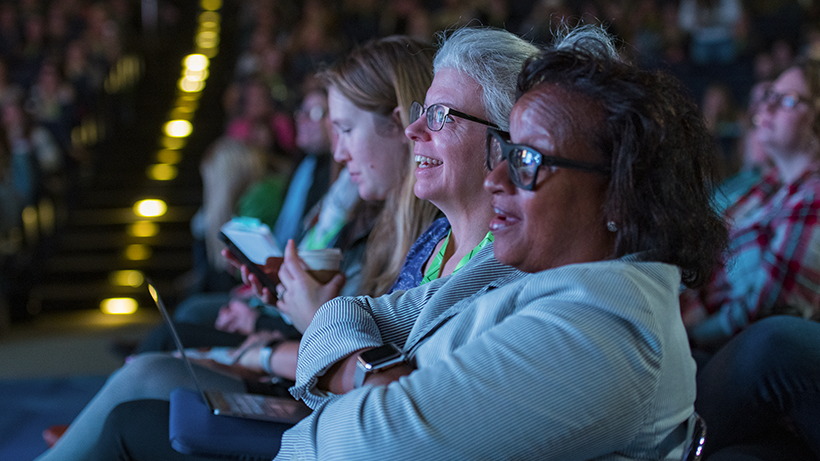 In this post, participants in the 2018 NCTE Annual Convention share what they brought back to their schools.

After attending a presentation on Genius Hour led by Colorado State University’s Pamela Coke and Ricki Ginsberg, I immediately left the room knowing I would implement this work into my own high school English classroom.

I serendipitously ran into Pam at Exhibition Hall, and she suggested we work together. Her preservice teachers would serve as mentors for my students. Although I teach in New York and she teaches in Colorado, we’ve been able to collaborate digitally with Google docs and Google Hangouts.

We are only a few weeks into the project, but it’s safe to say that all of us—my freshmen, her students, Pam, and myself—are gaining more than just learning about our topics for Genius Hour.

At NCTE ‘18 I sought out sessions related to AP and voice because the balance between authenticity and test prep is a challenge. Charles Youngs presented impactful solutions to engage student voice with the critical thinking rigorous texts call for.

I modeled sketchnotes for students and we practiced with the opening pages of The Great Gatsby—for some students, it was like a new world of reading was opened!

Artistic students are digging being “allowed” to draw their thinking while reluctant readers have another entry point to complex texts. All students are annotating more with access to an additional tool that gives voice to their thinking. Thank you, NCTE ‘18 and Charles Youngs!

During the Craft Moves in Nonfiction session, Loree Griffin Burns suggested creating 3-D models of text structures to give life to the writing process. She shared that Slinkys could represent a narrative sandwiched between the prologue and epilogue.

That idea just blew me away. Immediately, I began to think about how I could incorporate 3-D text structure models in my classroom.

I thought and thought, and finally Play-Doh popped into my head. The students rolled out the Play-Doh to create the various text structure organizers on their desk. Then, they used dry erase markers to fill in the organizer. The tactile engagement worked wonders to help my students understand text structures and their organizers. 3-D models will now be a part of my professional toolkit thanks to the NCTE conference and that amazing panel.

Pairing A Raisin in the Sun with Kendrick Lamar’s song “DNA” and a W.E.B. DuBois’s The Souls of Black Folk excerpt was inspired by the Breaking Binaries session at NCTE18.

Connecting these readings made students take an unfamiliar stance toward Walter: to see his struggle not only through the eyes of an academic, but also through the eyes of a modern poet. Students made many connections between DuBois’s idea of double-consciousness, Kendrick’s exploration of his consciousness, and Walter’s awareness of his identity and how their awareness of how they are perceived by others might limit each man’s agency. All of them also explore the idea of what it means to be a man, in their mind versus in society, and how that tension plays out in their everyday interactions with themselves and others.

The remnants of my learning from this session continue to reverberate through my teaching.

Attending the NCTE Convention was a life-altering experience for me as a teacher. It really helped me process what I’m doing currently in the classroom, as well as where and how I’d like to move my classroom in the future.

For example, I attended a session that discussed allowing each and every student to share his/her voice. I always thought I had been doing so, but during the conference, I was able to reflect and see that might not be the case. Therefore, I used a method—also from the session—that discussed using parts of a well-known poem in a student’s own unique poem to show understanding of the poem’s meaning and theme. I even took this a step further to reach a wider population in my classroom, and I created a poem template. That way, a student could still share his/her ideas and understanding, just with a little support.

It was a hit, and I’ll continue to use what I’ve learned from the conference for years, and lessons, to come!

Each November thousands of literacy educators from across the country make the journey to a Convention that inspires their practice and rejuvenates their profession.