Expanding Our Ideas through Books - NCTE
Back to Blog 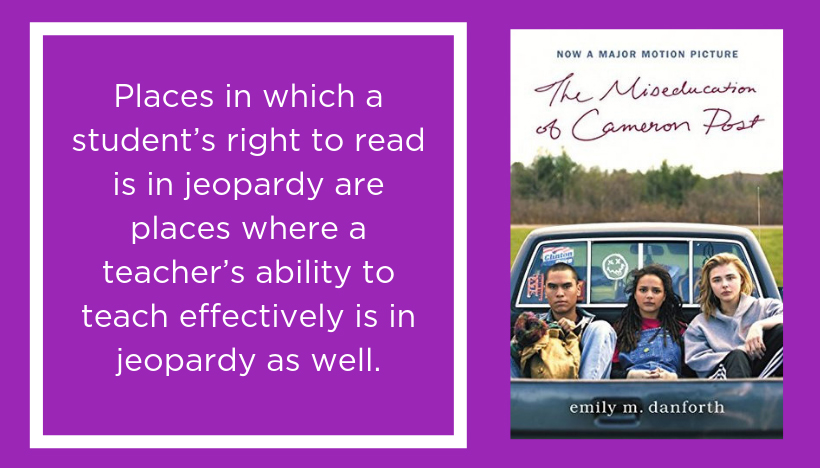 “We want students to engage texts, to interrogate texts, to demand meaning from texts; to talk back to texts; to juxtapose texts with their lived experiences, with their encounters with other texts, and with their rapidly expanding ideas about people and the world. . . . “ Twice this year (2015), emily m. danforth’s The Miseducation of Cameron Post has been challenged in the state of Delaware. Once in Cape Henlopen and once in Indian River.

Cameron Post, a 2013 finalist for ALA’s William C. Morris YA Debut Award, is a coming-of-age story of a teenager in Montana who discovers she’s gay and is sent away to a religious camp to take the “cure” for her homosexuality. Cameron Post is one of those books that scares some adults.

For some, books like Cameron Post introduce unknowns: worlds that adults and students may not have encountered, characters they’d rather not encounter, ideas that are new. Sometimes adults fear these unknowns so much that they don’t want their students to meet them in a text and they feel so strongly that they try to keep all students from reading the text.

“It’s odd but in many ways those of us who fight against censorship and those who fight to censor texts are all fighting for the good of our children and their education. How we want to attain that good is where we come out on different sides.”

—Millie Davis in Keep Them Reading: An Anti-Censorship Handbook for Educators

Yet, education is all about probing the unknown and that’s why places in which a student’s right to read is in jeopardy are places where a teacher’s ability to teach effectively is in jeopardy as well.

Millie Davis is the former director of the Intellectual Freedom Center at the National Council of Teachers of English (NCTE).