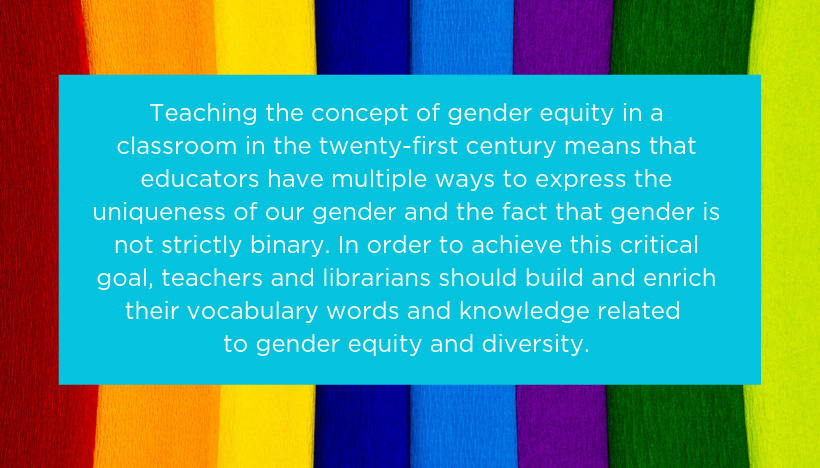 From the NCTE LGBTQ Advisory Committee.

This post was written by NCTE member Tadayuki Suzuki, a member of the NCTE LGBTQ Advisory Committee.

Gender-nonconforming and transgender topics often have not correctly been perceived or recognized by teachers and librarians. As Gomez (2018) reports in Banned Books Week, some school districts believe discussing gender-nonconforming and transgender issues in a classroom is an inappropriate instructional practice; school administrators often prohibit librarians from using school funds in order to purchase books on these topics for their students.

Although more picture books with transgender and gender-nonconforming characters such as I Am Jazz by Jazz Jenning (2014) and Morris Micklewhite and the Tangerine Dress by Christine Baldacchino (2014) have been published and are available, some teachers and librarians may still remain uninformed about gender-binary related topics and how these topics should be properly introduced to their students in order to have a meaningful discussion.

They might be slightly less hesitant if they read aloud a story about a female gender-nonconforming character who dresses as a boy because it is more accepted by society for a girl to wear a pair of shorts and have short hair. Glancing at colorful illustrations with a male gender-nonconforming character wearing a pink-colored dress on the cover page of a picture book, however, some teachers and librarians might wonder how they can relate to these picture books and discuss with their students the significance of gender-binary and diversity topics. Yet I believe that the basic concept of teaching about different identities in a classroom stays the same.

If teachers and librarians are hesitant to read aloud lesbian, gay, bisexual, transgender, and queer (LGBTQ) picture books with a gender non-conforming character, one option is to  consider selecting and reading books with nonhuman characters.

Attributing human characteristics to nonhuman characters is a writing practice customarily adopted by children’s book authors when they write about a unfamiliar topic for children. Here I want to share two picture books with nonhuman characters which can be used to discuss the concept of gender and gender binary issues. The other picture book with nonhuman characters is Worm Loves Worm written by J.J. Austrian and illustrated by Mike Curato (2016). The story features two worms that decide to get married, and the story continues as they wear rings and discuss which one should wear a dress or a tuxedo in the story. The truth is that it does not matter for them which one will become the bride or the groom. Austrian decided to write this story when his four-year old son asked him why Austrian’s lesbian friends were not married, although his son knew both were truly in love just like other married couples.

Without using any explicit terms, these picture books effectively teach students concepts from gender and gender binary topics. Teachers and librarians could read aloud these stories to their students, have them find any mislabeled items at home or in their classroom, and discuss how they should be properly labeled, and/or how they might feel if their names, genders, and/or identities were mislabeled. They could also find with their students any other creatures that possess both male and female organs, and create related stories together.

Teaching the concept of gender equity in a classroom in the twenty-first century means that educators have multiple ways to express the uniqueness of our gender and the fact that gender is not strictly binary. In order to achieve this critical goal, teachers and librarians should build and enrich their vocabulary words and knowledge related to gender equity and diversity.

For instance, Teaching Tolerance publishes the guide The Best Practices for Serving LGBTQ Students, which lists basic but important vocabulary words related to LGBTQ issues in the acronym section. Resources like this one can be a great help as teachers and librarians begin to educate themselves in this area in order to become supportive allies for their nonbinary and transgender students. Tadayuki Suzuki is an associate professor of literacy education at SUNY Cortland, where he teaches both undergraduate and graduate literacy courses. The areas of his academic interest include culturally responsive teaching, children’s literature in literacy instruction, and teaching ESL. He can be reached at tadayuki.suzuki@cortland.edu.