Global Citizenship: Through the Lens of an Immigrant - NCTE
Back to Blog 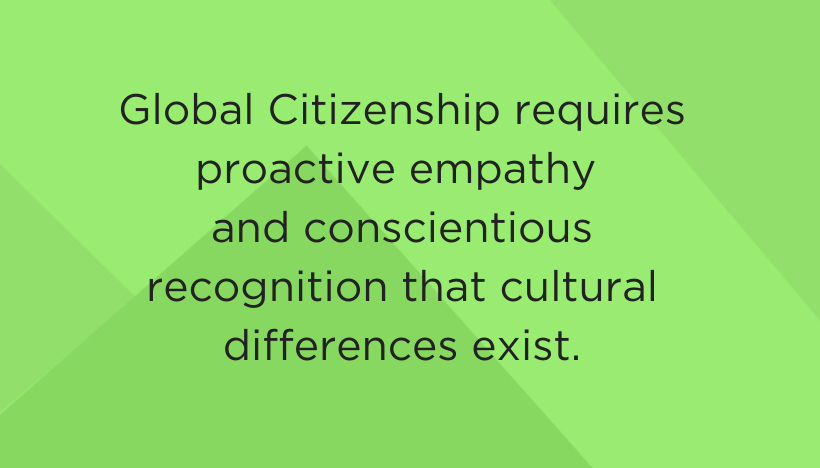 This post was written by NCTE member Heerak Kim, a member of the NCTE Standing Committee on Global Citizenship.

What is Global Citizenship? The answer to that question will differ based on who you ask.

I approach this question from the perspective of an immigrant from Korea who came to the United States of America as a fourth grader, entering a world that was completely foreign.

I only knew a few words of English when I entered the fifth grade at a Christian elementary school in the greater Philadelphia area. It turns out that I was the only Asian student in my whole grade. I remember being in a classroom and not understanding anything. And that continued for hours and hours. Day after day, I was thrust into an environment in which I was hearing but not understanding, and seeing but not comprehending. Being from a completely different cultural setting, I could not accurately process visible information.

To give an example of cultural practices that are diametrically opposed between “East” and “West,” eye contact in Korea can be interpreted as rude, especially when maintained by a fifth grader with their teacher; however, in the United States lack of eye contact may be perceived as rude. Thus, encoding and decoding of visual cues, or nonverbal communication, can be vastly different based on cultural diversity. Many immigrants experience this difficulty of cultural encoding and decoding throughout their life in the United States, but those in the majority may lack empathy to understand the struggle.

As an example, I’ll illuminate an encounter I had in October at the 2019 Convocation of Kappa Delta Pi (International Honors Society in Education) in Norfolk, Virginia, where I delivered my educational research.

Here, when I spoke with a professor of one of the major state universities in America, she shared with me her recent experience with a Syrian student of hers. She told me that she referred her student for student counseling (and psychological services) at her university, because he was acting “strange.” I asked her what she meant by “strange.” The education professor, who has a joint appointment in the psychology department, told me that the student would follow her after class and talk with her continuously until they reached her office. She also mentioned that his grades were dropping and that she noticed that he was having difficulty getting along with his classmates.

The education professor told me that when she talked with her Syrian student’s father, he did not think that there was anything wrong with his son. The education professor said that she was very puzzled about this and asked me for my advice. Being a member of the NCTE’s Standing Committee on Global Citizenship, I wanted to provide an answer that could help her understand the concept of global citizenship, informed by sensitivity to and empathy for cultural diversity.

I asked the education professor if it is possible that as an immigrant, the Syrian student was experiencing cultural conflicts that were not easy for him. Especially since Syria is stigmatized to a certain extent in the United States, social experiences for the Syrian student may be marked by difficulties that he may not be able to or want to quantify in concrete terms.

Perhaps his Syrian father, who is a medical doctor, did not see anything wrong with his son because he saw him through the lens of Syrian culture. Also, it is possible that the Syrian father, who is a medical doctor, is experiencing similar social stigmatization in his own professional setting. The education professor, who had taught education for over two decades, looked surprised and said that she had never considered this before.

I told her of my experience of observing a medical doctor from Syria being mistreated by nurses and patient care technicians (Certified Nurse Aide’s) in a hospital in Delaware because he was from Syria, he spoke with an accent, and he behaved in a different way. There was mistreatment of the Syrian doctor by the healthcare team on both open and insidious (passive-aggressive) levels, such as certain looks exchanged between healthcare team members or snickering by patient care technicians. In some settings, merely having an accent could invite mistreatment.

I explained to this education professor that although there may be psychological issues, our dedication to Global Citizenship requires that we are sensitive and empathetic to the Syrian student’s socioemotional needs and to environmental factors that might conflict with his cultural reference points. What may be perceived as “odd behavior” may not be that but just a misunderstanding.

I then asked the education professor if she told the Syrian student in clear terms not to follow her, and she said, “Not in so many words. I said that I am going to my office now, and I expected him to understand that I did not want him to follow me.”

I explained to the educational professor that cultures can differ, so that it may not be fair to fault the student from another country if the professor did not clearly and explicitly state what she wanted. I recommended to her that she use clear and explicit statements, such as, “I have to go to my office, now, so let us make a future appointment for my office hours and meet again at that appointment time.” I offered that being clear and explicit would reduce confusion and misunderstanding. She nodded and said, “I realize, now, why there could have been a misunderstanding.”

Global Citizenship requires proactive empathy and conscientious recognition that cultural differences exist. We cannot judge students, staff, and professors of other cultures by the cultural norms that we are familiar with. That would be ethnocentrism by definition. Global Citizenship means recognizing the relative nature of cultural practices. What is rude in one culture may not be rude in another culture. Conversely, what may be polite in one culture may not be polite in another culture. Heerak Kim is currently an Ed.D. student in Leadership at the American College of Education. His research interests include Global Citizenship as applied to African-American communities, immigrant populations, and special education students.