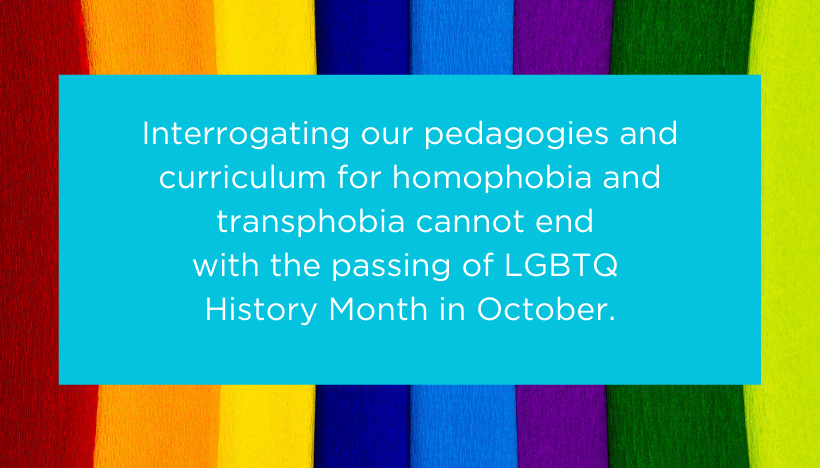 This post was written by Cody Miller and Summer Melody Pennell, members of the NCTE LGBTQ Advisory Committee.

Interrogating our pedagogies and curriculum for homophobia and transphobia cannot end with the passing of LGBTQ History Month in October.

Such critical analysis should be daily practice for English language arts teachers to ensure affirming spaces for LGBTQ youth, communities, families, and educators. Regardless of intentionality, we know that schools continue to fail LGBTQ people. Our own convention is not free of homophobia and transphobia, as is evident from the hateful rhetoric spewed during a panel session at last year’s gathering. Yet, not all homophobia and transphobia works explicitly. Rather, forces that continue to marginalize LGBTQ  populations often work under the guise of “common sense” and unexamined traditions that are long part of school design.

For instance, scholar Harper Benjamin Keenan notes that schools were “designed to sort people into binary gender categories through record keeping, facilities (like bathrooms), and activities (like sports).”

English teachers, we believe, have the power and responsibility to challenge the harmful designs of schools. To that end, we want to highlight LGBTQ advocacy and visibility at this year’s annual NCTE Convention in Baltimore. The LGBTQ Advisory Committee worked with the Genders and Sexualities Equality Alliance (GSEA) to create advocacy material that will be featured at this year’s Convention. The materials will be available for download after the Convention and were inspired by NCTE’s Committee Against Racism and Bias in the Teaching of English. It is our hope that teachers across K–12 contexts will download, display, and share the handouts with colleagues, administrators, and families.

Our collective suggestions for challenging homophobia and transphobia require educators to:

Additionally, for educators attending the Convention, we hope that you participate in sessions marked by the LGBTQ strand. Participants can find noted presentations by visiting the convention portal  and selecting the LGBTQ strand.

The GSEA’s sponsored roundtable session is Friday at 3:30 (session (I.02) LGBTQ+ Spirited Inquiry: Visibility in ELA), and our business meeting is Saturday at 6:00 pm. We welcome all NCTE members who are interested in LGBTQ issues in ELA to join us. We also encourage convention-goers to share their knowledge gained in all  LGBTQ strand sessions through Twitter using  the #NCTE19 hashtag.

Working to imagine and create affirming classrooms and schools for LGBTQ youth cannot end at the closing of a conference. Our hope is that conversations that begin at this year’s convention will continue throughout the year and translate to action, whether in your own schools or in online spaces. Collectively, we English teachers can create educational spaces where LGBTQ people feel affirmed and valued.

Summer Melody Pennell is a member of NCTE’s LGBTQ Advisory Committee and is the current Chair of NCTE’s Genders and Sexualities Equality Alliance (GSEA). She is an assistant professor of English Education at Truman State University where she works with preservice English teachers and also teaches an undergraduate LGBTQ+ YA Literature course for all majors. She can be contacted via email at spennell@truman.edu and found on Twitter @summerpennell.