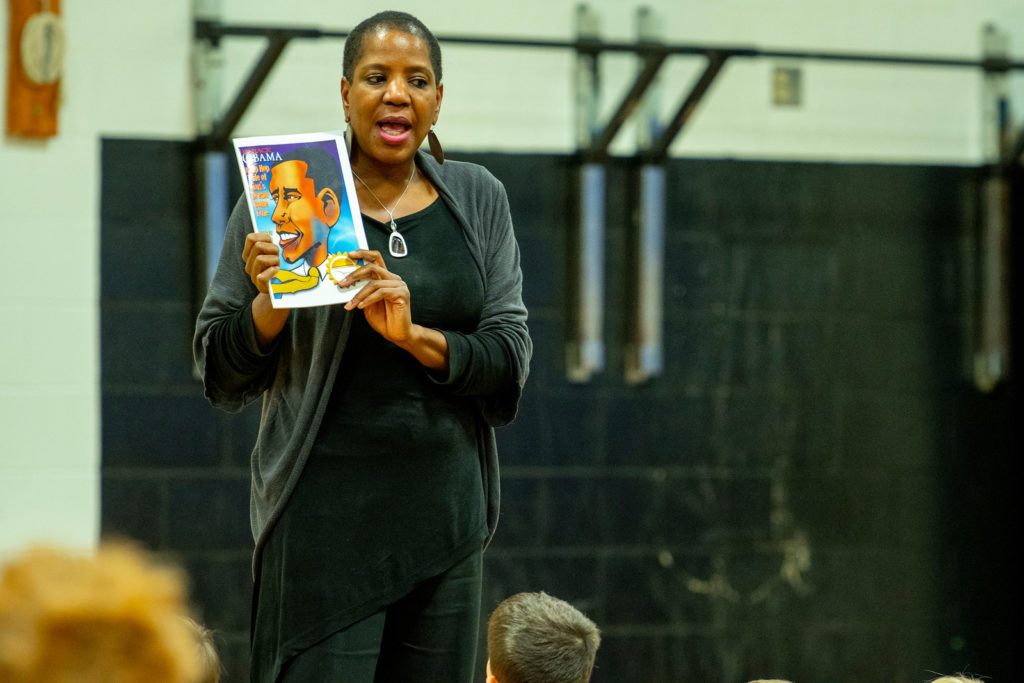 Last February, the African American Read-In spawned school and community readings and events across the nation. To help inspire your 2020 plans, here’s a quick look at some of the great ways teachers, students, and other readers honored African American books and authors.

Librarian Stephen Beck and Family Resource Center coordinator Wynette Young collaborated on the school’s first Read-In event. Eight adult readers from the Louisville community read books about important African Americans to students during their scheduled library time throughout the day. Beck says that the majority of the school’s 600 students were able to participate and interact with a community reader.

At Bowling Green High School, teacher Natalie Croney and librarian Brittany Butler collaborated on making books written by African American authors available for students to sample throughout the day. Afterwards, student readers shared excerpts from the books that had an impact on them.  According to Croney, almost 300 students and community members participated and the library had a record number of check-outs during the Read-In day. It was also said that teachers found themselves telling students to put away the books, rather than their phones.

“We tried to make sure that students were able to see the adults in their lives as readers. It was also important that students learned to value Black minds and see African Americans as thinkers in conjunction with seeing [them] as entertainers,” –Natalie Croney, Teacher

Drew Elementary school hosted roughly two dozen readers who fanned out to every classroom to read aloud to students. San Francisco Chief of Police, Bill Scott, and other officers were among the readers. “I think it’s a great opportunity to celebrate African American authors and illustrators,” says Principal Vidrale Franklin, who adds that he would like to see more frequent events throughout the year.

To celebrate the 2019 African American Read-In at Harvard, a selection of books was made available from the Jeanne Chall Reading Lab collection throughout February. Students, faculty, and staff from the Harvard Graduate School of Education then posted reviews and comments about the book(s) they read, serving as a community resource for all.

At Jackson Creek Elementary, the Read-In is an all-male event with the goal of showing students that “real men read,” according to Principal Sabina Mosso-Taylor. Organized by school reading coach Jennipher Fraizer, the event was hosted by the library and community male readers fanned out to every classroom.

“I love seeing our students of all colors read the works of African American authors, leaders, and artists with pride and enthusiasm.” –Lisa Luangsomkham, Instructor

The second annual African American Read-In at UDCCC featured two authors, Dr. Anita Nahal and Dr. Dorothy Phaire, who read from their published works during an afternoon of festivities, followed by a lively question and answer session. It “provided an opportunity for attendees to ask the guest readers about their passion for writing, how to get published, and how to encourage their children to read and write,” says Read-In Coordinator Juanita Eagleson. In addition to the readings, the event featured a book “give-away” table with assorted texts written by and focusing on African Americans.

English teachers Mary James and Kathryn McGehee facilitated hands-on activities in the school’s library, including poetry readings, a printed “menu” of activities, and an imaginative activity to help students appreciate the African American experience. “Students selected from a variety of known, iconic photographs of African Americans throughout American history,” District Curriculum Specialist Anna Cross says. The students then recreated the photographs by posing and dressing identically to the images, stepping into the lives of the individuals in a personal and meaningful way to identify with their struggles and experiences.

While hundreds of schools participated in Read-In events, engagement spread beyond the walls of school buildings.

On the fourth Saturday in February, the Tennessee-based Black Children’s Books and Authors organization held its third Read-In event at the Boys and Girls Club of Greater Memphis.

“This event allow[ed] me the opportunity to introduce our organization to the community and advance our mission of promoting awareness of children’s and young adult literature by Black authors.” – Stacy Ladonna, Founder and Executive Director

A partnership between the Black Child Development Institute and Final Kut Barbershop in Detroit featured a shared reading of Derrick Barnes’ book Crown: Ode to the Fresh Cut. State Representative Leslie Love was present to cut the ribbon on a bookshelf featuring texts with African American male protagonists. The boys made paper crowns and decorated them as part of the event and were able to take a book home with them after the event.

MARC hosted its fourth annual event at Gwen T. Jackson Elementary School in Milwaukee. President Tanya Evans worked with school literacy leaders to preselect appropriate books by grade level, so that the nearly 20 volunteer readers could select books if they didn’t bring their own. There was a formal welcome and a continental breakfast before students were escorted to their classrooms for Read Alouds. State Representative Kaylan Haywood was also in attendance.

“Highlights included the rich conversations students had with the volunteers and the enjoyment that our volunteers expressed as many of them asked us to make sure we invite them back next year.” –Tanya Evans, President

Join the African American Read-In in February! Find the AARI Toolkit, skim a list of events, and record your event at http://bit.ly/NCTE-AARI.