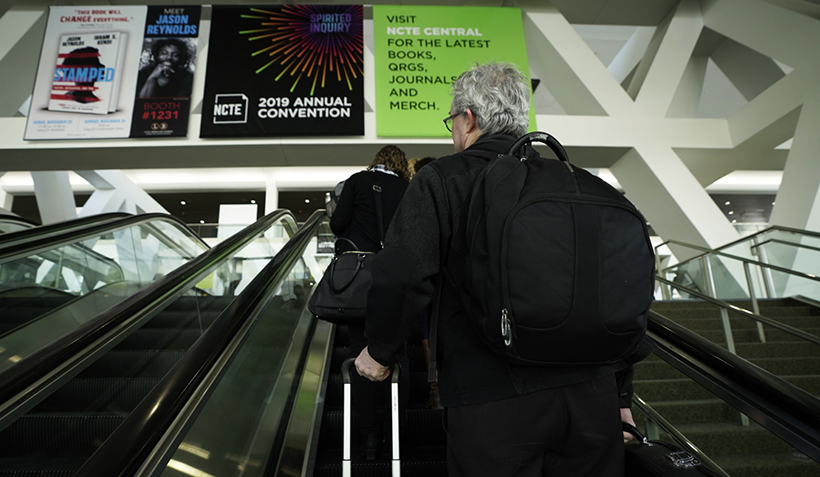 This blog post was written by NCTE member Carrie Mattern.

Since reading Kelley Gallagher for years and learning from Tricia Ebarvia and the work of #DisruptTexts, I tend to start classroom discussions by asking students, What do you notice? after sharing in the experience of new texts. When I was in Baltimore for #NCTE19 as a first-time attendee and presenter, I asked myself that same question, and I’m continuing to catalog my wonderings.

Kelly Wickham Hurst, Marian Dingle, Tyrone Martinez-Black, and Ursula Wolfe-Rocca facilitated a #placevalue Twitter chat a few months ago regarding Eve Ewing’s Ghosts in the Schoolyard. It focused on our powerful role as educators given the places we inhabit: whom do we value, what spaces do we create, and what does place mean in regards to our own learning alongside student learning?

With this math chat in mind, I noticed the value we educators place on tangible items such as books and places in line. This was surprising to me but not to veteran attendees. Educator shea martin tweeted this after educators exited Tommy Orange’s keynote speech: “When you leave in the middle of keynote of a BIPOC (Black, Indigenous, People of Color) to stand in line to get your book signed, what do you value more—his words or your possession of them?” I also learned that pronouns were not printed on badges, but Twitter handles were. Do we value online presence more than gender identity?

In class, as students share and notice, their observations often turn into questioning. In Baltimore, mine did too.

I noticed a Baltimore Public Schools book donation bin upstairs near registration by the ribbons. I wonder if this could have been more beneficial downstairs near the Exhibit Hall? I noticed homeless people lining the walk in between hotels and the event center, and left-over food from dining events; I wonder if any provision could have been made to connect these two?

I noticed that public transportation was easily accessible for attendees. The light rail station was next to the event center. How many educators used it to learn from the people of Baltimore and see another view?

I noticed an article in the Baltimore Sun about an educator who manages a tutoring program; she was in desperate need for tutors and supplies. I wondered if her  program could have been a session, or if a donation bin could have been provided, or if time could have been set aside to workshop cross-country collaboratives?

In fact, I wondered often about local educators and students, especially after an encounter on the street in which a group of young Black men questioned why my Black friend was walking with me, a White woman. If I had researched ahead of time, I would have been more aware of the deep racial divide in the heart of the city, and especially the lack of educators of color.

After this conversation I realized I was leaving Baltimore with regret. What could I have done differently? For me, the answer seemed simple: put the time in, do the research, be aware, and take action.

Now I wonder about Denver, next year’s Convention city. Like Baltimore and and many urban areas, it faces gentrification issues and the plight of homelessness. How will this shape our learning? How will we come better prepared to understand place? How can I be of service as an attendee, an educator, a  co-conspirator?

What can I do differently to get to know the people of Denver and the value they offer in their spaces? The research is leading me to the work of Nickolas H.B. Dawkins, and Bree Davies with the podcast HelloDenver, courtesy of a local librarian, Julia E. Torres. Youth on Record is also doing really important work—I wonder if it could be a featured session?

I left Baltimore without learning Baltimore. I left the city without understanding the culture that exists mere miles from the event center. I am motivated to do better as an educator, a coconspirator, and a visitor to Denver. 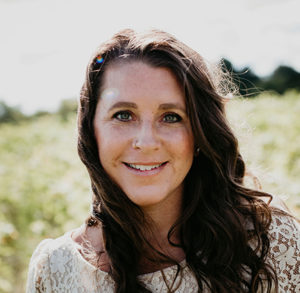 By day, Carrie Mattern teaches English 9 and 12 at Carman-Ainsworth High School in Flint, Michigan. By night she lives dangerously and tries not to step on Legos while dressing Barbie dolls. She is a momma, wife, writer, wanna-be chef, reader, and an NEA CHOOSE Fellow.