Global Citizenship: Understanding the Value of Ethnic Subcultures - NCTE
Back to Blog 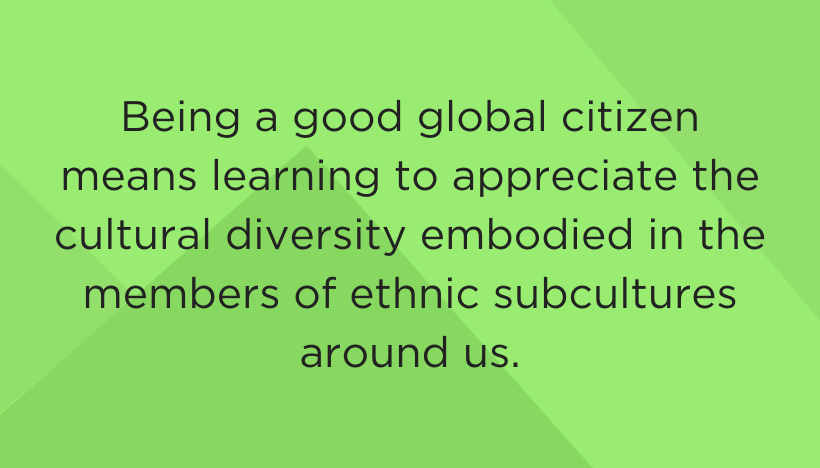 This post was written by NCTE member Heerak Kim, a member of the NCTE Standing Committee on Global Citizenship.

How does Global Citizenship relate to ethnic subcultures in the United States?

Answering this question would benefit from respecting multiculturalism and appreciating the reality of ethnic diversity in America. I approach this question as a member of an ethnic subculture. I am a Korean American who still speaks to his father and mother in the Korean language. In fact, my mother does not speak English after 40 years of living in America, because it is possible for immigrants in the United States to live completely in their ethnic subculture.

When I was growing up in Philadelphia, I went to the First Korean Presbyterian Church of Philadelphia, located one block away from 5th Street in the Olney neighborhood of Philadelphia, near La Salle University. At this ethnic Korean church, my father was the Senior Pastor for over three decades until his retirement. Worship services are conducted in Korean on Sundays, Wednesdays, and Fridays, the days in which ethnic Korean churches meet throughout the United States.

After the main Sunday worship, church members eat Korean food for lunch, as is customary for ethnic Korean churches in the United States. Koreans who attend my father’s Korean church generally do their shopping at H-Mart, which is a Korean grocery store where Korean is spoken and Korean food is sold alongside “American” groceries. Korean immigrants in America generally prefer a Korean dentist, primary care physician, optometrist, and lawyer. Korean restaurant owners often see ethnic Koreans as their primary customers and prefer to speak in Korean at work. Korean shop owners and drycleaners often listen to Korean radio during work hours. This is a shared Korean ethnic identify from Los Angeles to New York City. This is also the case in my current neighborhood area of Annandale, Virginia, which has everything ethnic Koreans would want to maintain their Korean subculture.

How do you feel about this? Do you feel comfortable with the Latin American or Hispanic subculture near you? Do you feel comfortable seeing Korean churches with Korean signs near your house? Some Americans that I have talked with have commented that everyone should just speak in English because we are all Americans. I don’t think that they mean anything hostile or mean by what they have said. But such statements highlight the way immigration has been perceived in the American context for a long time.

Historically, when immigrants come to the United States, assimilation has been expected. This was the case with Irish immigrants of the Potato Famines and Eastern European Jewish immigrants of Russian Pogroms in the late 1800s. Because Irish and Jewish immigrants tended to be racially white, they were able to assimilate into the dominant culture with education, marriage, and a name change. But for Asian immigrants and Latin American immigrants in the second half of the 1900s, such an assimilation was difficult, if not impossible, due to physical differences. Perhaps W. E. B. DuBois said it best: “The problem of the twentieth century is the problem of the color-line—the relation of the darker to the lighter races of men in Asia and Africa, in America and the islands of the sea.” Toni Morrison highlighted the conflict of color in social standing and assimilation as well in her book The Bluest Eye.

When we talk of global citizenship, it is difficult, if not impossible, to dismiss the reality that some people cannot be assimilated into the dominant environment even if they want to because of color or other factors. This may partly be the reason that certain ethnic subcultures are maintained even after members of that ethnic subculture are fluent in English and have a high level of education. There is a sense of identity, comfort, cultural connectedness, and ethnic empathy that maintains ethnic subcultures in America and in other places in the world.

It may be beneficial to recognize that ethnic subcultures are here to stay and that they are likely to grow in number as America becomes home to even more diverse ethnic groups. The concept of the melting pot of the 1980s can, therefore, be seen as anachronistic. Furthermore, it may be argued that the melting pot concept is a colonizing of ethnic subcultures. Should ethnically diverse individuals throw away their ethnic subcultures to achieve a theoretical vision of a united and unified America, when it does not jive with reality?

Perhaps the concept of global citizenship can offer insights into how we in America and elsewhere can approach individuals living in ethnic subcultures. Global citizenship necessarily implies that there is diversity, since the world itself is diverse, with over 100 countries and an exponentially greater number of ethnic groups. Global citizenship supports the “salad bowl” model of looking at America: America is made up of different cultures, and each culture maintains its diversity and particular flavor, adding to the greatness of the salad bowl.

Being a good global citizen means learning to appreciate the cultural diversity embodied in the members of ethnic subcultures around us. One way I do that is by going to small local restaurants owned and run by immigrants from Latin America, Asia, Africa, Europe, and the Middle East. This is a good start to being a good global citizen, and culinary delights are certainly a great benefit.

Heerak Kim is currently an Ed.D. student in Leadership at the American College of Education. His research interests include Global Citizenship as applied to African-American communities, immigrant populations, and special education students.