Poet Juan Felipe Herrera: "If I Hadn't Written, the Feeling of Isolation Would Have Eaten Me Up"  - NCTE
Back to Blog 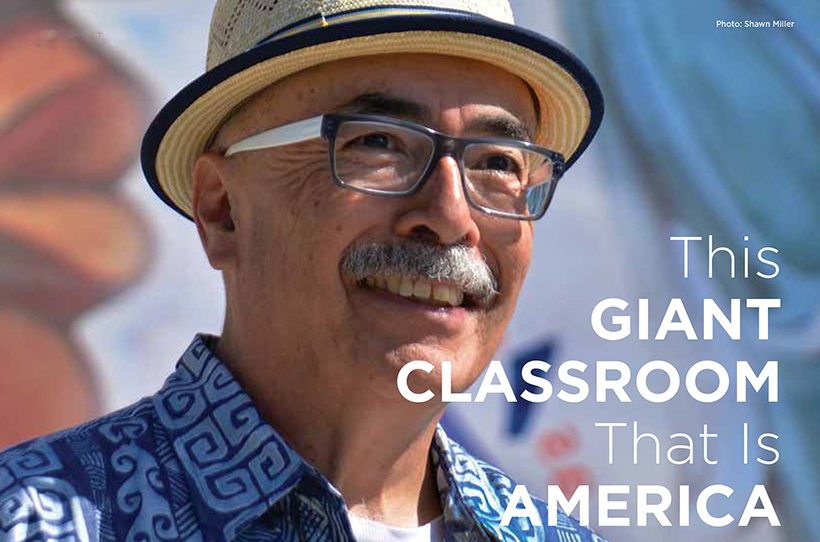 Poet Juan Felipe Herrera was the 21st United States Poet Laureate from 2015 to 2017. This passage is excerpted from an interview by Trisha Collopy that ran in the March 2017 issue of The Council Chronicle.

[Poet Juan Felipe] Herrera often recounts an early experience in the classroom, the moment when a third-grade teacher, recognizing his silence and shyness, invited him to come up in front of the classroom and sing.

Five words from the teacher, “You have a beautiful voice,” transformed Herrera, turned his next few years in class from silence to engagement. His teacher put him on his first stage, Herrera says; his work now is using that voice “in this giant classroom that is America.”

Back in the Michigan classroom during Herrera’s visit, students had finished brainstorming clotheslines of words, had finished creating a battle scene of frozen bodies and then using that as a writing prompt. They had moved their bodies, broken free from the page; they were loose and connected to each other and Herrera was finally ready for the deep work, the vulnerable work of writing a poem.

He gave them their third prompt: “What are you concerned about?” And the words—and the poems— began to flow. The students wrote and talked about tough issues, rape culture, violence: everything they’re afraid to let out and put into words.

Herrera calls this the “What’s Going On and What Do You See,” Project, a small way that those in the room can begin to hear each other, to see each other, to become visible in a culture full of stories and images that leave so many out.

“I want students to discover writing in an artistic sense, become writers, create realities in so many ways, with their voice, bodies, ideas, drawing with each other, that’s the idea, to touch magic, find magic,” Herrera says.

To those who fear poetry might disappear, or wonder whether art has a place in the high school classroom, Herrera says it has never been more urgent.

“We have to kick that up a notch: have our students read out loud, engage in self-expression instead of bottling it all up,” he says. “If I hadn’t written, the feeling of isolation would have eaten me up. I lived as a migrant child, on the road.”

Read poems or learn more about Juan Felipe Herrera on the Poetry Foundation website or at poets.org.

Trisha Collopy is a Minneapolis writer and editor.