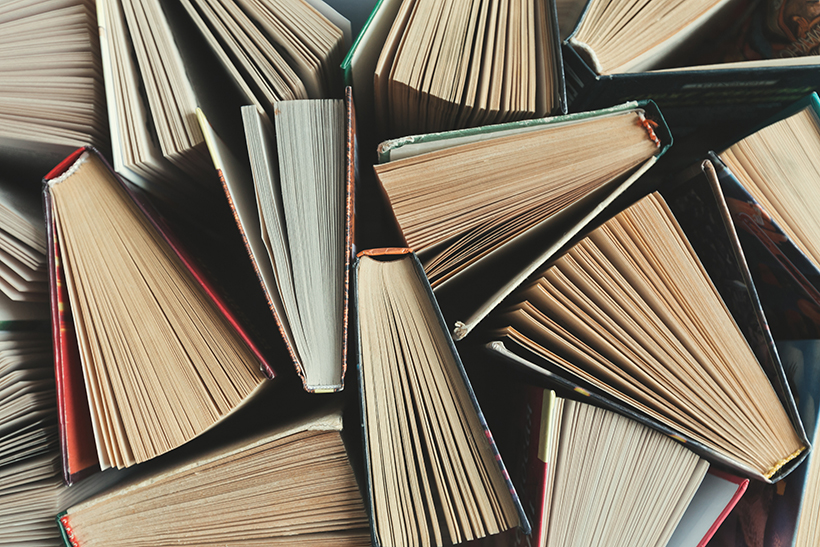 English educator, NCTE member, and co-founder of #THEBOOKCHAT Scott Bayer tweeted out the following request for fellow English teachers back in September 2019: 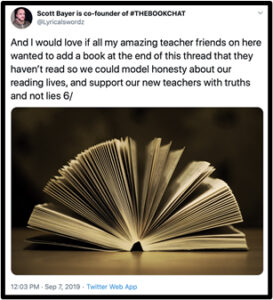 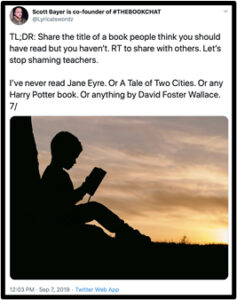 The replies he received are encouraging to me because many English educators whom I find to be brilliant and influential to my own thinking admitted to not reading books long considered canonical to the profession.

I myself have never finished a book by Hemingway nor did I get past the first few chapters of Catcher in the Rye, and I know little about Moby Dick save for the slivers of quotes I skimmed from Spark Notes to write a summer essay in high school. And like many English teachers who responded to Scott’s post, I find some of Shakespeare’s plays interesting and other downright boring and redundant.

My point is not to debate whether or not Shakespeare should be taught. I have taught Romeo and Juliet and Twelfth Night for five years now. It’s my belief that Shakespeare (and canonical texts in general) can be taught in critical ways that open up discussions about privilege, power, and oppression.

Conversely, young adult literature can be taught in marginalizing ways that cater to narrow interpretations of texts based on shallow assessments like multiple choice tests. Rather, I want to address what messages a strict reverence to the canon sends to students and teachers, both current and aspiring.

“You’re an English teacher and you haven’t read X” is such a common statement made to and by English teachers. Indeed, the replies to Scott’s thread point to the phrase’s ubiquity.

There’s a harmful ideology lurking beneath the statement that deserves critical attention. Saying that teaching certain texts (such as works traditionally considered part of the canon) makes one more of an English teacher is not only inaccurate, it also reproduces hegemonic notions of who counts as an English teacher. The centrality of canonical texts in the English curriculum replicates harmful ideologies in English classrooms.

Similarly, the outsized importance placed on canonical texts in English teacher discourse acts as a gatekeeper, sending messages about who belongs within the profession. That gatekeeping ensures that dominant identities and ways of knowing remain central to the profession of teaching English at-large.

A personal love and zeal for a canonical text does not necessitate its classroom merit. I had several teachers whose excitement for teaching texts and figures I saw as homophobic was visible; that excitement did not make me any more eager to engage in marginalizing and harmful narratives about queer people. As a college student and teacher, young adult titles centering queer characters spoke to me far more than titles position heterosexual desire as all consuming. Yet, I am no less than English teacher.

I am not suggesting that some English teachers’ love of canonical texts is the sole reason the English teaching profession continues to be composed of dominant social identities. There are a multitude of factors stemming from a policy landscape obsessed with standardized testing measures, slashes to the public social safety net, and the continued failure of school systems in affirming youth from marginalized communities that reify racism, classism, homo- and transphobia, ableism, and other oppressive forces that act as gatekeepers to the profession.

Julie Gorlewski and Eve Tuck’s edited book Who Decides Who Becomes a Teacher? is a crucial read for understanding the policy front. Education policy and political actors should always be central to addressing the various gatekeeping mechanisms in our current teacher pipeline avenues. The narratives we send in our profession at-large through “essential reads,”  whether explicit or implicit,  deserve critical attention as well.

I am suggesting that, as English teachers, we have the power, whether we know it or not, to shape ideas of who is welcome into the profession. Selecting and revering texts and pedagogies that alienate students from marginalized communities will not advance the goal of having a teaching body that reflects the diversity of America’s student body.

“You’re an English teacher and you haven’t read X” embodies the thinking that a love (or at least a reverence) of canonical texts is a prerequisite to being a “good” English teacher. It is my belief that a critical understanding and ability to challenge and critique the canon and the logic that underpins its position is essential in teaching English in an equitable and just manner.

Of course this work is nothing new for many English teachers, especially English teachers of color, who have been working towards challenging and rewriting stories about the profession through antiracist teaching and curriculum for decades. Yet the identities within the teaching force remain predominantly white, cisgender, straight, able-bodied and otherwise socially dominant, and it’s these teachers whom I call on to bear the onus of challenging stories about who belongs in the profession.

It is my hope that we have more teachers who enter the profession because of their love for narratives like Gaby Rivera’s Juliet Takes a Breath, Jason Reynolds’ Miles Morales: Spider-Man, Kacen Callendar’s Felix Ever After, and Adam Silvera’s Infinity Son. That love can be fostered by stocking our classroom libraries with those titles and other stories that center experiences and voices neglected in the canon.

If as a profession we are to challenge inequities and barriers that keep the identities within our profession overwhelming white, cisgender, straight, able-bodied, and otherwise socially dominant, then we must actively challenge the stories we perpetuate about our profession through comments we make about the canon.

I would like to thank Liz Kleinrock and Josh Thompson for reading over drafts of this piece and providing invaluable feedback.