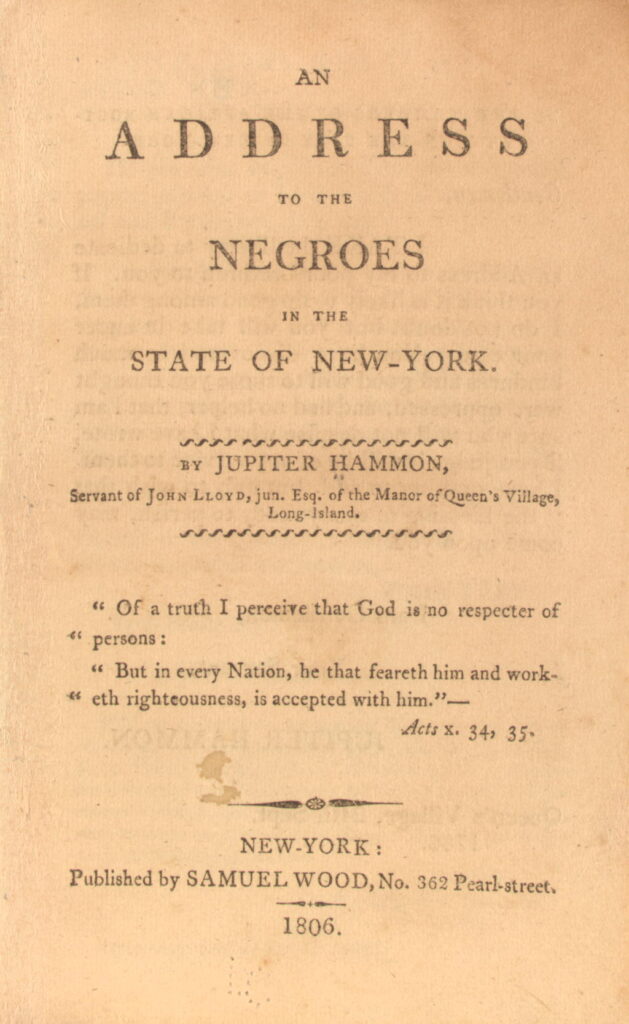 Jupiter Hammon, the first African American to publish poetry in the United States, was born in Lloyd Harbor, New York, on October 17, 1711, and for this reason October 17 is unofficially celebrated by many as Black Poetry Day.

Jupiter Hammon was enslaved by Henry Lloyd. The Lloyd family encouraged Hammon to attend school, where he learned to read and write. He became a bookkeeper and negotiator for Henry Lloyd and the family’s business. In his early years, Hammon was heavily influenced by the Great Awakening, a major religious revival of the time, and became a devout Christian. Much of Hammon’s poetry had Christian themes. On October 17, United for Libraries, a division of the American Library Association, will designate Joseph Lloyd Manor in Lloyd Harbor, New York, as a Literary Landmark™ in honor of Jupiter Hammon.

After Henry Lloyd died in 1763, Jupiter Hammon remained enslaved by Lloyd’s son, Joseph, with whom he moved to Connecticut. There, Hammon became a leader in the African American community and attended abolitionist and Revolutionary War societies. At the inaugural meeting of the Spartan Project of the African Society of New York City in September of 1786, Hammon delivered his most famous sermon, “Address to the Negroes of the State of New York.” His writing was reprinted by several abolitionist societies, including the New York Quakers and the Pennsylvania Society for Promoting the Abolition of Slavery.

In honor of Hammon’s birth, we celebrate the contributions of African Americans to the world of poetry, including poets such as Maya Angelou, Amiri Baraka, Gwendolyn Brooks, Jericho Brown, Lucille Clifton, Terrance Hayes, Langston Hughes, and Sonia Sanchez, to name just a few.

Traditionally, Black Poetry Day is celebrated with a poetry reading. To celebrate the day with your students, gather resources that focus on the works of African American poets, including the work of Jupiter Hammon. Introduce the project by explaining the significance of the day. Then ask students to explore the resources and ask each to choose a poem that will contribute to the poetry reading. Ask students to share their poems and the reasons for their selections. On the day of the poetry reading, invite students to read their poetry selections aloud. If desired, students can make the poems available for a class  anthology commemorating the event.