Reading, Teaching, and Discussing LGBTQ+ Family Stories with Elementary Students - National Council of Teachers of English
Back to Blog 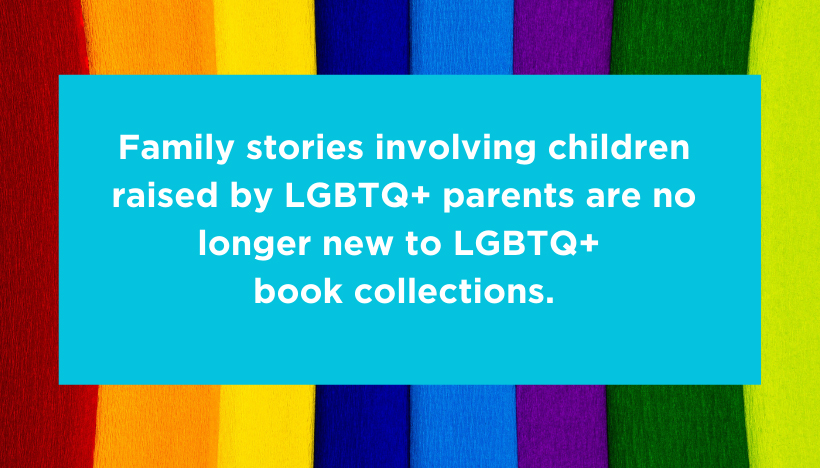 From the NCTE LGBTQ+ Advisory Committee

This post was written by Tadayuki Suzuki, a member of the NCTE LGBTQ Advisory Committee.

Family stories involving children raised by LGBTQ+ parents are no longer new to LGBTQ+ book collections. Such narratives have become more prevalent and steadily appear in the American Library Association’s (ALA) Rainbow Book List. Five picture books related to families appeared on the 2021 Rainbow Book List. Of these, four are realistic fiction (Call Me Max, Plenty of Hugs, My Maddy, andPapa, Daddy & Riley.) The fifth, Our Subway Baby: The True Story Of How One Baby Found His Home, written by Peter Mercurio and illustrated by Leo Espinosa (2020), was picked as a finalist for the Lambda Literary Award and is the only nonfiction picture book on the list.

Our Subway Baby describes how, on his way home, Danny rescues a baby found tucked behind the turnstiles of the New York City subway. Three months later, Danny is called to the courtroom, where Judge Cooper tells him, “A baby belongs with someone who loves him” and asks if he wants to adopt this baby. Danny agrees. He and his partner Pete name the baby Kevin after one of Pete’s family members and bring him home for Christmas. Ten years later, Kevin asks Judge Cooper to perform the wedding ceremony for his two fathers.

This story informs us of some important values and qualities of human beings. Although the book does not describe how and why the baby was abandoned at the subway station, it is clear that giving up a baby would be extremely difficult for any parent. The baby’s biological mother must have been desperate when she made that decision. It is also hard for Danny simply to ignore this baby when he finds him at the subway station. So the reader can infer that Danny and Pate would have had a serious conversation regarding adopting Kevin.

It is also clear from this story that love knows no boundaries and that families often come in different compositions. However, another family story that takes place in the Central Park Zoo in New York City published more than a decade ago prompted controversy—And Tango Makes Three, written by Justin Richardson and Peter Parnell and illustrated by Henry Cole (2005).

This nonfiction family story has been repeatedly challenged by many parents, schools, and libraries. In this narrative, Rob Gramzay, who is a penguin keeper, notices two male chinstrap penguins, Roy and Silo, together and gives them one of the two fertile eggs laid by a female chinstrap penguin. Roy and Silo take care of the egg until it hatches and Tango is ready to join them as a family member.

Interestingly, these family stories involve two different time periods and settings in the same city. The couples, two penguins and two gay males, adopt their babies and expand their families differently. However, both stories feature individuals who care about others; empathy and compassion are common themes in both stories. These are important topics for children to examine and discuss in elementary classrooms.

Several pedagogical approaches can facilitate such examination and discussion. Teachers can use a simple Venn diagram with their students to compare these two books or two others with their students’ families. After reading Our Subway Baby, students can also read and discuss We Found Our Son in the Subway, a New York Times opinion piece authored by one of the fathers,  and We Found A Baby On The Subway—Now He Is Our Son (BBC).

ELLs and auditory learners will enjoy watching and listening to the interviews conducted with Danny and Pete on WGN News and by Anderson Cooper.

Chelsea C. Jenkins provides six useful categories of questions (family structures, adoption, homosexuality, animal freedom, human freedom, and individuality) for reading And Tango Makes Three. Many of those questions are easily adaptable to Our Subway Baby, such as:

Open-ended discussion questions such as these encourage elementary students to engage in and read more critically and reflectively, and through different lenses.

Many children’s books contain an overemphasis on heteronormative discourses such as “begetting acceptable nuclear families, rather than promoting the acceptance of non-normative sexual and gender identities not centered around reproduction” (Lester, 2014, p. 252). Our Subway Baby and And Tango Makes Three encourage readers to expand their definition of what constitutes a family, and to recognize that a family should be the agent for connecting with others through love. They support our efforts to share children’s books that reflect the lives of our students—all of them.

Tadayuki Suzuki is an associate professor of literacy education at SUNY Cortland, where he teaches both undergraduate and graduate literacy courses. The areas of his academic interest include culturally responsive teaching, children’s literature in literacy instruction, and teaching ESL. He can be reached at tadayuki.suzuki@cortland.edu.