Lessons from the NCTE Convention - NCTE
Back to Blog 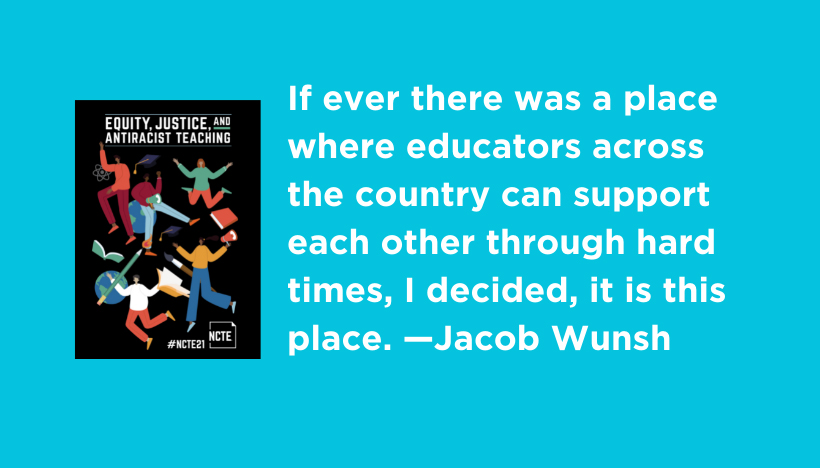 This post was written by guest author Jacob Wunsh.

I was Google searching—something to the effect of “PD aside from Teach Like a Champion”—when I came across the NCTE Annual Convention for the first time. I remember feeling equal parts enthralled and overwhelmed. Hundreds of sessions . . . yet I knew no one who had attended. Would my charter school pay for it? If they wouldn’t, would I?

As it turns out, they would, and more than once. The first time, on that November flight to Houston, I remember taking a deep breath only to find myself stifling a sob on the airplane. That fall had been uniquely brutal when it came to work-life balance. I had changed grade levels and adopted two new courses, which meant long Sundays planning lessons and a laundry list of “Next years. . . ” and “Next times . . . ” at the end of most workdays.

In short, I was exhausted. I had a friend waiting for me in Houston, so I had that to look forward to; however, the more time I spent on that plane, the more worried I became. I’m tired because I’m working too much, I thought to myself. And now, I’ve chosen to spend the first half of my Thanksgiving break doing stuff tangential to work. What was I thinking?

For any readers out there with similar concerns, allow me to assure you now: the NCTE Convention left my cup far fuller than it found it.

The opening general session that year featured Chimamanda Ngozi Achiche, whose book Americanah I had just finished reading. Her star power did not disappoint, yet the session I remember most vividly from my first Convention was that of the next day’s headliner: Dr. Christopher Emdin.

On that stage, Emdin mixed academic research with poetry in a way I had never seen before and may never see again. Toward the end of the lecture, he charged White educators in particular with learning more about the cultures of the BIPOC students we serve. What’s more, he delivered this message, in part, via rap. During the talkback, I was busy writing down ideas to take back to my classroom when another audience member wrested my attention. I saw a man, perhaps in his mid-twenties, rapping back at Chris Emdin. An auditorium full of educators, hundreds if not thousands of strangers, and this dude was letting it rip! I wish I had written down the content of what he sang, but what I noted clearly was the speaker’s reaction. A teary-eyed Emdin made a fist with his right hand, crossed his heart, and pointed at the man with his left hand. “Thank you, fam,” he muttered.

If ever there was a place where educators across the country can support each other through hard times, I decided, it is this place. Before I boarded my flight home to Denver, I had already ordered a copy of Emdin’s book.

By now, I was hooked. Some of the sessions that stand out to me from my second Convention in Baltimore were Tara Westover’s book interview on Educated and a keynote by Tommy Orange. What I’d like to highlight, though, is a smaller session I had the great fortune to attend, led by the founders of a hashtag called #DisruptTexts. In a small group, my table partners and I were discussing the importance of mirrors and windows to a culturally relevant English curriculum.

In an attempt to demonstrate vulnerability, I shared with these folks a personal and professional blindspot of mine: on the one hand, I wanted to teach more Native literature in my classroom; on the other hand, with such limited knowledge of this space myself, I had no idea where to start. Immediately, these colleagues showered me with title after title, author after author. Feeling defensive, I cried, “I barely have time to read for pleasure! How am I supposed to fill a hole that a lifetime of education has dug?” Across from me, a woman patiently smiled. “We make time for the things that matter,” she replied.

This year, I will teach There There by Tommy Orange in my eleventh-grade English class. I know I may make mistakes as we navigate from tribe to tribe throughout the novel (Cherokee, Cheyenne, Arapaho, and Navajo), but I commit to repairing harm wherever I cause it, however I can. Nevertheless, my primary takeaway from #DisruptTexts was this: I will no longer avoid certain topics and texts in my classroom for fear of not being “expert enough” to teach them “properly.” If my students would benefit from exposure to Native authors, then I ought to teach them. And there is no shame in asking for help along the way.

Even if these were the only lessons the NCTE Convention had afforded me—and they are far from that—I would continue to recommend the experience for years to come. 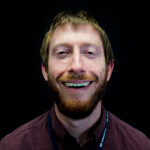 Jake Wunsh teaches English and German at a Title I charter high school in Southwest Denver, where he has worked the past seven years. He is currently pursuing his MA in English at the Middlebury Bread Loaf School of English. Before he moved to Denver, he was a Fulbright English teaching assistant in Baden-Würrtemberg, Germany. In his free time, he likes to hike, read, and watch anime. His most recent publication, a reflection on the climate change politics of Hayao Miyazaki’s Princess Mononoke, can be found on Medium. 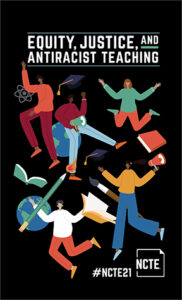 Learn more and register for the
2021 NCTE Annual Convention,
November 18-21!