I recently retired after 28 years at Oak Park and River Forest High School (OPRFHS), just west of Chicago. I began in 1994 as a traditional English teacher. In 2003, after a two-year stint of developing poetry programs in the lowest-performing boroughs in England, I returned to OPRFHS in a new self-created role: spoken word educator. The role entails pushing into every section of ninth-grade English for a five-day poetry unit each semester—a poetry café unit in the first semester, a slam unit in the second semester, and every section of sophomore English for one five-day poetry slam unit. On the final day of the unit, students share one original poem written during the week. For the in-class poetry slams, students vote anonymously for who they think would best represent the class, and their English teacher, my assistant, and I choose the class champ out of their top three. We then hold semifinals during the school day where the head of the English division and alumni are guest judges (scores are never publicly shown). The top 12 to 14 poets then get to perform in a classwide, in-school field trip where the superintendent, alumni, and visiting poets serve as judges and guest performers. This is tier one of the Oak Park Model, and arguably the most important one. Tier two is our after-school Spoken Word Club, which puts on three evening showcases a year for sold-out audiences. We “recruit” for the club during our class units, and anyone who is willing to commit to being a supportive part of a team is welcome to join. Tier three is our slam team that competes in the Chicago-area slam (formerly called Louder Than a Bomb). There are tryouts for the 6 to 8 slots on the team.

Student voice and pride are at the heart of our model. The in-class cafés and slams develop class community and give teachers the opportunity to gain new insights about their students and often to recognize untapped potential in some of them.

One of the magical elements of the Oak Park Model is that it plays the long game: it doesn’t self-select based on who already likes poetry but helps students discover that something they perhaps initially hate can become transformative. Sometimes it even takes a couple of years. One story that comes to mind is of a recalcitrant student—we’ll call him Joey—who had a pretty severe speech impediment. He was an angry, sulky, sullen kid who would mutter under his breath and huff and puff if asked to put his head up. He was one of a rare group who couldn’t be cajoled into participating. Joey’s ninth-grade English teacher took me aside and told me not to push—in his experience, Joey was beyond motivating and would sabotage the class. Given the kid’s speech impediment, it was easy to be sympathetic, even as he stewed.

The following school year, my assistant and I arrived early for the first day of our sophomore slam unit. Joey was the first kid to arrive and as soon as he saw us, he shouted, “Sh#t! I’m not doing this sh#t!” He stomped in and put his head down on the desk. By that Wednesday, I caught him furiously writing. I quietly asked him if I could check out what he had written. He glared at me, but handed me the paper. It was a rant of sorts, mainly about how his dad had abandoned his family. My heart ached for the kid and there were legitimate poetic moments that I was able to compliment him on. The next day, he called me over to read his new piece, and it was even more well-crafted. On that Friday, not only did he get up to read for the slam, but he was class runner-up. The next week, he showed up at Spoken Word Club and stuck with it for the rest of his high school career. He’d even ask to come to speak with ninth-grade classes about his unlikely journey to becoming a poet. Joey was one of many students who eventually came around to the value of poetry.

To celebrate the impact on student voice of twenty years of our Spoken Word Club, we released an anthology of student and alumni poems called Respect the Mic: Celebrating Twenty Years of Poetry at a Chicagoland High School (Penguin Young Readers). In its honor, we’ve teamed with Denison University and Penguin Young Readers to launch a free competition for students and teachers that connects to the anthology. Respect the Mic coeditor Hanif Abdurraqib will be the final judge for the student poetry competition, and NCTE past president Carol Jago will be the final judge for the teacher lesson plan competition. There is a total of $3,000 in prize money. Full details can be found here, and the deadline is October 20 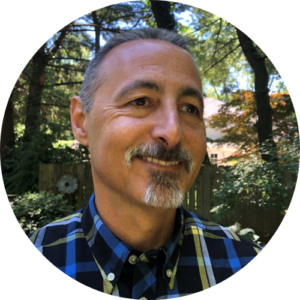 A former Chicago social worker, Peter Kahn was an English teacher from 1994 and a Spoken Word Educator from 2003 at Oak Park/River Forest High School until his retirement in June of 2022.  His former students can be seen in Louder Than a Bomb and America to Me. A founding member of the London poetry collective Malika’s Kitchen, he cofounded the London Teenage Poetry Slam and, as a visiting fellow at Goldsmiths, University of London, created the Spoken Word Education Training Programme. He earned his MA in English education from The Ohio State University, student-taught at Columbus East High School, and taught for the Young Scholars Program. Peter was a featured speaker at the National Council of Teachers of English’s annual convention and runner-up in the NCTE and Penguin Random House Maya Angelou Teacher Award for Poetry. Along with Patricia Smith and Ravi Shankar, he edited The Golden Shovel Anthology: New Poems Honoring Gwendolyn Brooks, reviewed in the New York Times by Claudia Rankine. Along with Hanif Abdurraqib, Franny Choi, and former student Dan “Sully” Sullivan, he edited Respect the Mic: Celebrating 20 Years of Poetry from a Chicagoland High School, deemed “electric and expansive” by Kirkus Reviews. Peter’s 2020 poetry collection, Little Kings, has poems featured in the Guardian and The Forward Book of Poetry.