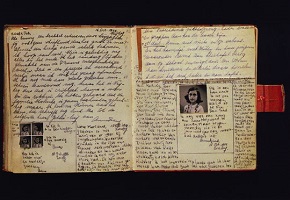 On June 12, 1942, Anne Frank received a small red and white diary as a present for her 13th birthday. The diary, which she named Kitty, was her companion for just over two years. Frank’s last entry in the diary was dated August 1, 1944. Her family’s secret hiding place was raided three days later, on August 4. She died of typhus in the Bergen-Belsen concentration camp in February or March of 1945.

Explore the ways that eyewitness reports shape our understanding of events we can’t see first-hand. Introduce students to this topic using a lesson (adapted to your grade level), such as Through the Eyes of a Refugee, which examines the first-hand reports of a Syrian refugee, or Evaluating Eyewitness Reports, which examines first-hand accounts of the Great Chicago Fire.

Then have students break into small groups for an end-of-the-year research project. First, provide an outline or list of the main topics you’ve studied during the year. Or, have students use their textbook as a reference. Have each group select an event to research, taking care that topics are not too broad, such as “World War II.” Using primary source documents, have students research the event using eyewitness accounts. A good source of primary documents can be found at the American Slave Narratives website. Finally, have each group present their research to the class, for an end-of-the-year review session.

How else can a diary be used in the classroom?