Giving Back to Kids and the Community: Jamal Cooks Brings Passion, Purpose, and Pop Culture - National Council of Teachers of English
Back to Blog 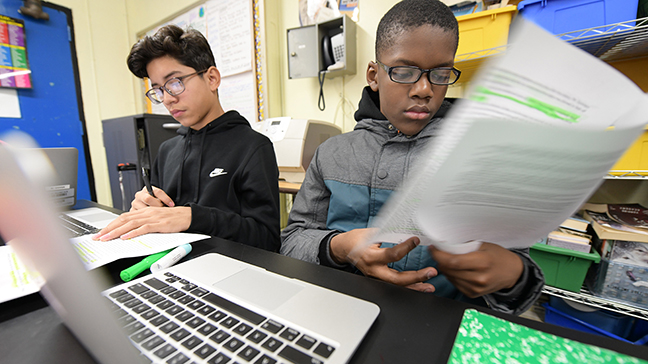 NCTE is home to myriad remarkable teachers — here we take a moment to appreciate just one of them:  award-winning educator Jamal Cooks. For news of more remarkable award-winning teachers, visit the NCTE Awards page.

NCTE member and Black Caucus Chair Jamal Cooks is a professor of language, literacy, and culture in the Department of Secondary Education in the Graduate College of Education at San Francisco State University. He has been an advocate for students, urban communities, and teachers for more than 20 years.

The first thing Jamal Cooks asks his education students when they begin a discussion of classroom discipline is, “What are you doing with curriculum and instruction?”

The students are mystified. “They’re like, ‘Huh? I thought we were talking about discipline,'” says Cooks, a professor of secondary education at San Francisco State University and a literacy specialist.

But, Cooks explains, “If you are teaching in an innovative and engaging way, and you’re connecting with your students, and you’ve sought out the curriculum and instruction that you want to do, and you scaffold the learning, students don’t have time to go off-task. They don’t want to get off-task.”

Such content can include movie clips (such as snippets from the film Crash), YouTube segments (sometimes he’ll show comedian Trevor Noah’s take on growing up Black in America), or hip-hop and rap lyrics.

“You have to know your students,” says Cooks. For some, popular culture can be “an entrée, a hook, so to speak, to get them to engage in more academic work.”

Rather than focusing exclusively on the traditional canon, he says, “What’s important to me is how do we get students to develop literacy skills? If getting them to develop the skills that we need is through a rap lyric, cool. If it’s through current events, great. If it’s through something on YouTube, excellent.

“I’m less concerned about what text we have to use; I’m more concerned about the skills. And to me that’s real teaching—how you give students what they need to be able to learn the skills that you’re trying to get them to walk out of your classroom with.”

Cooks grew up in Oakland, California, with no thought of becoming a teacher, much less a college professor. Nobody in his family had ever gone to college; he thought if he did go, it would be as an athlete—a football or track star. He also composed raps and poems in high school as part of a rap group, writing that he says helped him develop his ideas and learn to write with passion academically, such as in essays.

After high school, Cooks went to the University of California at Berkeley, where he set aside his athletic dreams; his rap group also disbanded, despite winning a record deal. Cooks focused on academics and, due to a stint running an after-school program, chose to go into teaching, though with no desire to pursue a graduate career.

He saw problems ranging from poor teaching conditions to lack of resources to curriculum that didn’t represent or engage his students—and realized he wanted to help solve these problems.

He earned his education doctorate at the University of Michigan and now is able not only to regularly work with kids but also to influence teachers and impact scholars. By 2019, he will have chaired dissertations for more than 20 students, about 75 percent of whom are students of color.

By helping share his transformative vision of what education can be with future leaders, says Cooks, he feels he is making a long-lasting impact.

Besides his academic work, Cooks engages in outreach projects. For the past couple of years, he has focused on helping stem the school-to-prison pipeline. Last year, he led a writing program at a Bay Area juvenile hall, directing young men in journaling, reflections, and compositions, as a way to help them develop better plans for their futures.

“They talked about their aspirations, their dreams, their hopes,” Cooks says. Students worked on “the basics of a life plan for what they would do, where they wanted to go,” as well as back-up plans if that didn’t work out. “It was a very inspiring project.”

This spring, Cooks is directing a book club for African American boys in fourth and fifth grades. “I’m always working with schools and teachers on building expository writing skills and everyday writing and those kinds of things.”

Cooks recharges and stays balanced by, he says, focusing on his faith, his family (he’s married with a six-year-old son and ten-year-old daughter), and nonacademic activities, such as coaching youth and high school track.

“My life may look crazy, may sound like a lot, and may feel like it’s somewhat overwhelming,” Cooks says. “But I feel like I’m in a great position to be the nexus between students, families, communities, and schools.” Making things better is a task he cherishes.

“My hope is I can maintain the pace. The work has to get done.”

Jamal Cooks was interviewed for NCTE by Lorna Collier, a writer and editor whose articles about education and technology have appeared in US News & World Report, the Chicago Tribune, MSN.com, and AARP Bulletin. Reach her at lorna@lornacollier.com.