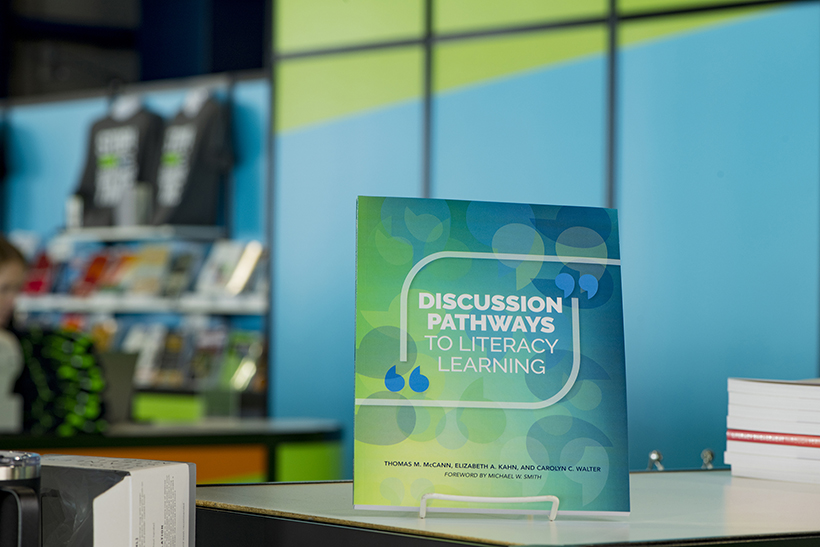 This post was written by NCTE member Tom McCann.

When colleagues Elizabeth Kahn, Carolyn Walter, and I had an opportunity to observe a particularly skilled classroom teacher, whom we call Ms. Torino, we marveled at the quality and extent of sustained discussion in her classroom.

To initiate discussions, Ms. Torino introduced her students to the story of a school district that entertained the prospect of purchasing a few robot teachers as a pilot program. As we observed in the classroom, we furiously took notes and recorded the discussions. In one class period, students discussed the problem for 40 minutes, with no teacher interruption. On the next day, the same class continued to discuss the problem for 42 minutes, with no teacher voice in the discussion. Given that discussions in the sense of genuine exchanges of opinion and explorations of ideas are rare, to witness such discussions was astounding.

Not only were the discussions extensive, they were also purposeful. A careful review of the transcripts of the discussions revealed that students were drawing from several sources of information to support their observations, referring to the contributions of their classmates, respectfully assessing each other’s arguments, and connecting various arguments. These were special classroom experiences, and they should be more commonplace.

We knew from our own experience as teachers, and from our review of an extensive body of research, that genuine classroom discussion has a powerful positive impact on literacy learning.

If we were to prepare future middle school and high school English teachers to engage their students in the same kind of extensive discussions as Ms. Torino’s students had experienced, we had to know thoroughly what factors accounted for the quality classroom discourse that we had witnessed.

What accounted for the vibrant discussions? Were the students particularly gifted, willing to engage with their peers with a simple prompting from their teacher?  Was the teacher so exceptional that few other teachers could emulate her? Was the topic under discussion so gripping that the students would inevitably be eager to talk about it with their peers. Was the structure of the learning activity, a case study and simulated community meeting, responsible for such a positive response?

To find out the extent to which any of these factors—teacher, students, topic, or structure—was responsible for the discussions we witnessed, we looked at other teachers in other schools, discussing a topic of the students’ choice, following a structure similar to what Ms. Torino had used.

We report this effort in Discussion Pathways to Literacy Learning. Students in four schools in four distinct communities discussed a controversy about teaching students in social studies classes about the concept of white privilege. This might seem routine, but in at least one school district, some community members complained strenuously about this element in the curriculum.

The students in the four schools discussed the controversy in a simulated community meeting to showcase the diverse perspectives and then in a kind of debriefing as the students reacted to what they had read and what they had heard in the simulation. In each class, on each day, students accounted for more than fifty percent of the talk in the classroom. As in Ms. Torino’s class, the students constructed arguments supported by texts and spoken testimonies, situated their contributions by citing the expressions of their classmates, and evaluated the variety of arguments that they heard.

This experience underscored for us that purposeful, genuine discussions are possible in almost any classroom. This means that any English teachers should take hope that sustained, connected discussions can occur in his or her classroom.

As we detail in Discussion Pathways, teachers can learn how to facilitate the kind of discussions that engage learners and support their literacy learning. For such discussions to occur, teachers have to scrutinize carefully the discourse patterns in their own classrooms and teach learners explicitly the kind of intellectual and social moves that keep discussions civil and rational. Thomas M. McCann is a professor of English at Northern Illinois University, where he contributes to the teacher licensure program. He taught English in high schools for 25 years, including seven years working in an alternative high school. His books include Transforming Talk into Text and Literacy and History in Action (Teachers College Press) and Talking in Class(NCTE, 2006).

Read a sample chapter or order a copy of Discussion Pathways to Literacy Learning.