Build Your Stack: Spark Her Curiosity for STEAM - NCTE
Back to Blog 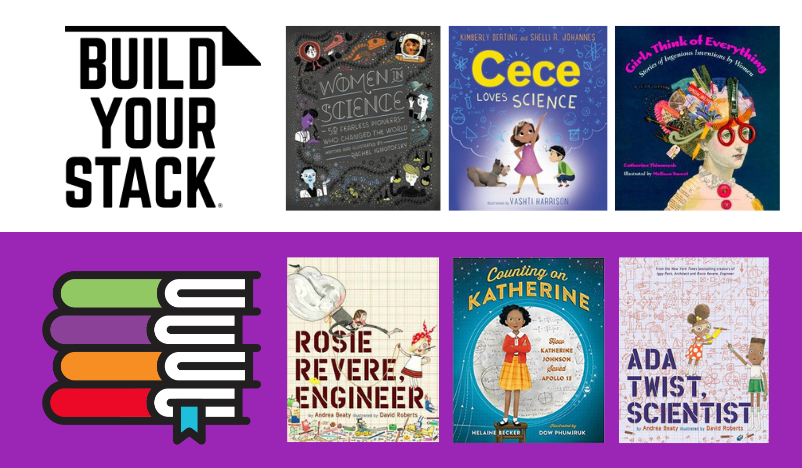 This blog post is part of Build Your Stack,® a new initiative focused exclusively on helping teachers build their book knowledge and their classroom libraries. It was written by NCTE member Marie Havran.

Representation matters. For young girls to shape what they imagine possible for themselves, women’s voices need to be honored in the STEAM (science, technology, engineering, art and math) fields, in which they’re drastically underrepresented. I believe a critical stance is necessary when selecting texts, in order to surround every student with stories of women, both past and present, who have positively impacted the world.

Showcasing women scientists and inventors in the classroom sends a message not only to girls, but to boys as well, that all are welcomed and science is for everyone.

Girls need to visualize themselves in these roles to break down the stereotypes that begin at a young age—such as the one that says girls aren’t good at math and science. The possibilities are endless when women are celebrated for making their mark on the world.

As an educator and the mother of two young girls, I believe we must advocate for exposure to STEAM fields, starting early. I believe the literature we select and the message we send to our students has to be inclusive and provide opportunities to celebrate and highlight women’s accomplishments.

Here are some picture books which focus on women who love science, technology, engineering, arts, and math. Share these to inspire a budding future scientist!

Women in Science: 50 Fearless Pioneers, written and illustrated by Rachel Ignotofsky, is a biography of women scientists from a variety of backgrounds and fields. The pages are beautifully designed and captivating—the biographies are easy to enjoy and full of fun facts and scientific explanations.

Cece Loves Science is written by Kimberly Derting and Shelli R. Johannes and illustrated by Vashti Harrison. From the time she is an infant, CeCe has asked “why,” which helps her as she begins an investigation for a school project. This book illustrates the scientific method as CeCe experiments on her dog to see if he likes vegetables.

Girls Think of Everything: Stories of Ingenious Inventions by Women, written by Catherine Thimmesh and illustrated by Melissa Sweet, offers readers a glimpse into the many inventions by women which surround us and make everyday living easier. This book leads readers to think about how these women made their inventions a reality.

Rosie Revere, Engineer, written by Andrea Beaty and illustrated by David Roberts, follows Rosie Revere. Rose is constantly engineering and learns that the only way you truly fail is if you quit. Supported by her great-great-great aunt Rose (Rosie the Riveter), she learns to meet each failure with persistence and passion.

Ada Twist, Scientist, also written by Andrea Beaty and illustrated by David Roberts, uses a rhyming story to celebrate the power in asking “why.” Ada Marie begins asking “why” at age three and never slows down. As she grows and conducts science experiments, her curiosity for the world around her only increases.

Counting on Katherine: How Katherine Johnson Saved Apollo 13, written by Helaine Becker and illustrated by Dow Phumiruk, is the story of an African American mathematician who was determined to work for NASA. Through this engaging story, Katherine’s important work is explained and beautifully illustrated.

What are your favorite STEAM books? Let us know on Twitter using #BuildYourStack! Marie Havran is an elementary literacy specialist in Greenville, South Carolina, and an adjunct professor at Furman University. Find her on Twitter @MarieHavran.