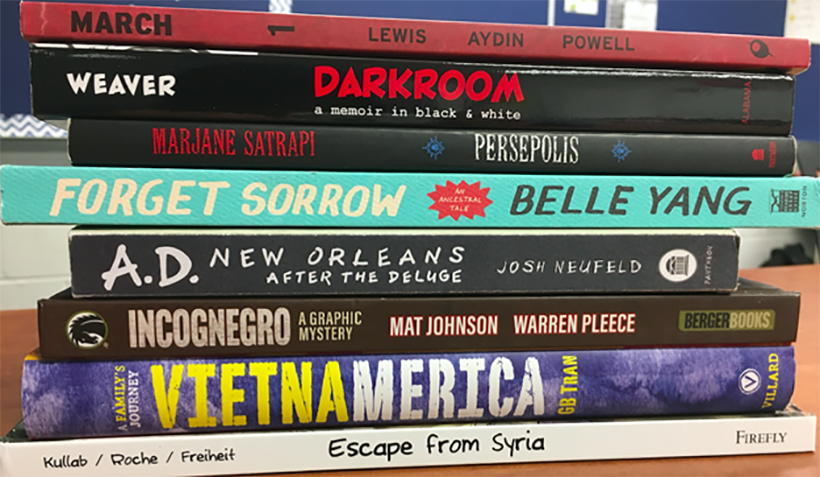 This blog post was written by NCTE member Cody Miller.

Ernest Morrell noted that critical English education should support students in developing “skills that allow them to create their own critical texts that can be used in the struggle for social justice” by drawing on the “everyday language and literacy practices of adolescents to make connections with academic literacies and to work toward empowered identity development and social transformation” (p. 313).

Morrell’s conceptualization foregrounds the way I develop my de-tracked English I Honors course.  Last year, I sought to expand the incorporation of graphic novels into my classroom. American Born Chinese was the premier text we read as a class for years, but reading a graphic novel was mostly siloed to the first few weeks of school. Inspired by the work of David Low (2017), I sought to strengthen the positioning of graphic novels as texts that can support the development of critical literacies.

I assembled a collection of graphic novels (see list at end) addressing socio-political events that I found many of my students were unaware of or had an incomplete view of. The socio-political events in the graphic novel selection span time and geography. However, I was still missing the second element of Morrell’s writing—connecting students’ literacy practices with academic content.  Fortunately, a conversation with my friend and literacy professor Dr. Jeanne Dyches led me to consider how to make writing video essays part of my curriculum.

The goals of a unit on graphic novels began to enter focus:

In other words, they fulfill the mandates of the Common Core writing, reading, and speaking/listening standards while developing literacy practices that reflect the reality of our current digital landscape.

It is my goal as a teacher to always foreground the experiences of humans in discussing any socio-political event.

I want students not to think of these socio-political events as a list of facts and dates, but rather as a narrative constructed of multiple people’s experiences, as they try to make meaning around a shared event. Power dynamics and systemic oppression shape how individuals experience those events and whose stories are privileged and centered in the retelling of such events, which is why I selected graphic novels that speak against dominant narratives found in many classroom history books.

Students selected video essays to watch that aligned with the graphic novel they were reading. After collecting examples and making connections from across the texts, students outlined and recorded their own video essays,  in which they articulated their understanding of the socio-political event being studied. After watching and discussing video essays, students and I created guidelines for high-quality videos. Such guidelines included: engaging pictures, minimal written text on the presentations, and effective use of voice to emphasize key points.

Graphic novels and video essays are two texts that can be used to deepen students’ understanding of major socio-political events. Songs, art, and film are other mediums that can be incorporated into the curriculum I outlined above. Regardless of the type(s) of texts, students are encouraged to consider how multiple types of writing construct our understanding of socio-political events.

Furthermore, students must consider the hierarchies of texts that schools perpetuate by adhering to only textbooks and written text, and how those hierarchies privilege certain narratives of socio-political events over other ones. The historical insight provided by the graphic novels listed are critical counters to what is published in many textbooks. Finally, in creating video essays, students construct their own understandings of socio-political events that can counter dominant, oppressive textbook narratives using digital literacy practices that are part of their daily lives.

A.D.: New Orleans After the Deluge by Josh Neufeld

Darkroom: A Memoir in Black and White  by Lila Quintero Weaver

Incognegro: A Graphic Mystery by Mat Johnson and Warren Pleece