Build Your Stack: Books with Literary Flair—and Math! - NCTE
Back to Blog 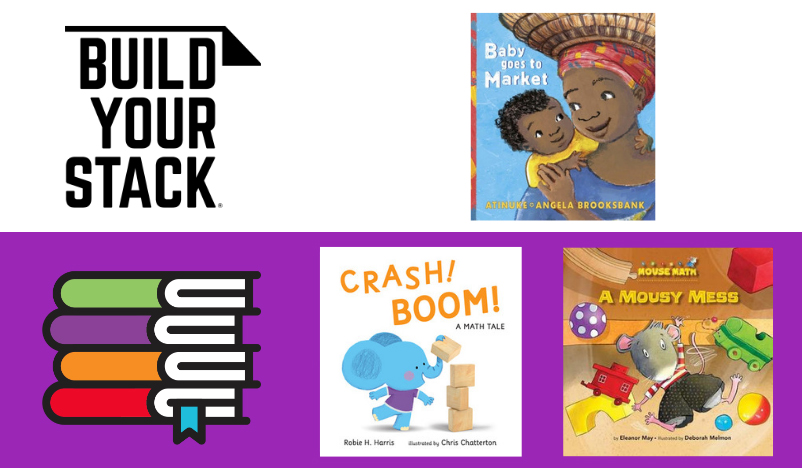 This post was guest authored by Herbert P. Ginsburg, Teachers College, Columbia University. It’s part of Build Your Stack,® an NCTE initiative focused exclusively on helping teachers build their book knowledge and their classroom libraries. Build Your Stack® provides a forum for contributors to share books from their classroom experience; inclusion in a blog post does not imply endorsement or promotion of specific books by NCTE.

Each year, the Mathical Book Prize aims to honor the finest “math books” for children of all ages.

The judges adhere to a nonnegotiable value: prize-winning books must be good literature.

We do not honor teach-y, dull, or instructional books. The math—including counting, shape, pattern, and measurement—must be presented with literary flair and illustrated with captivating art. Crash! Boom! A Math Tale, written by Robie H. Harris and illustrated by Chris Chatterton, is the 2019 Prize winner.  The story is about a winsome little elephant who engages in block-building. Elephant carefully begins with 1 block and then places on it, as the text shows, “1 more.” Elephant then decides to undertake a measurement task, “I want it to be as tall as ME!” The story details how Elephant builds the desired tower by stacking different numbers and types of blocks. Unfortunately, there is a Crash! Boom! and then another. But finally, Elephant learns how to make towers of the same height with blocks of different sizes.

Two features of this book stand out. One is that Elephant tends to think out loud while confronting the various challenges. Thinking is essential: ideas—not guessing or memorizing—bring Elephant closer to a solution.

Second, the book contains several mathematical concepts, including counting, adding, and, as the figure shows, equivalence in height. (An older child might explore the algebraic idea underlying this equivalence, namely that from left to right, the number of units in a tower is always twice the number of the previous.) Baby Goes to Market, a prize winner from 2018, was written by Atinuke, and illustrated by Angela Brooksbank. It’s about a baby who goes shopping with his mother in a marketplace in an African country.

The book, showing beautiful local costumes and foods, is as much about the local culture as it is about the math.

Each time Mama buys something, it goes into a large basket balancing on her head. But unknown to her, the merchants often give baby extra items—bananas, coconuts, biscuits—some of which baby eats but some of which he places in the basket. Putting down the heavy basket, Mama is surprised to learn that it contains five bananas, four oranges, and so on. “I did NOT buy these!,” she says. . . .

You’ll have to read the book to learn how baby escapes culpability for his secret acts of addition. The math is simple—counting things, adding, the correlation between number of things and weight, and more. But the story is charming and the appreciation of a different culture fills a gap: many children’s books focus on animals, and do not attempt to introduce ethnic, racial, and cultural diversity. Next is an Honor Book: The story of Mousy Mess, by Laura Driscoll, illustrated by Deborah Melman, unfolds as Albert, his sister Wanda, and a friend set out to explore The People’s Playroom.

The expedition was possible only because The People (who were not fond of mice) went on vacation. Arriving in the forbidden room, our mathematical mice were overjoyed, and in their enthusiasm knocked over bins full of toys, marbles, etc. But they knew that they had to restore the pre-mouse-mess condition of the playroom lest The People discover that it had been invaded. To accomplish their goal, the mice began by sorting and categorizing the objects into a useful number of piles, but alas, Albert fell into the marble jar just as The People returned. . . .

Again, you’ll just have to read the story to learn how the mice managed to escape into the next book in the Mouse Math series!