What Is Just Theory? - NCTE
Back to Blog 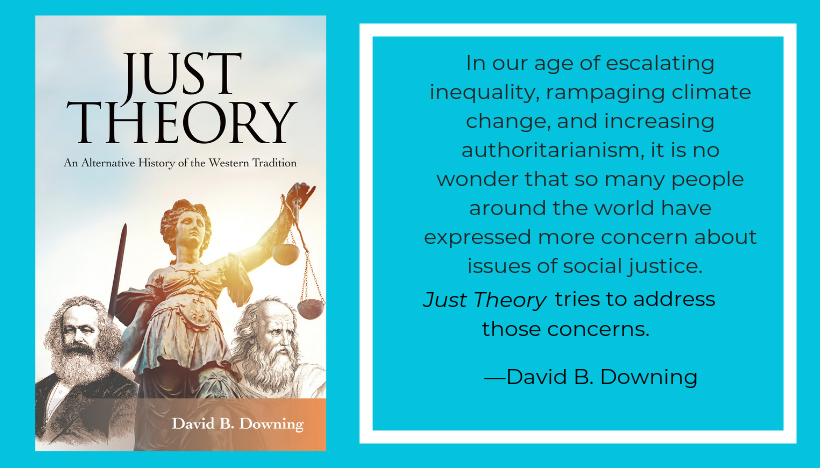 This blog post was written by NCTE member David Downing, author of Just Theory: An Alternative History of the Western Tradition (NCTE, 2019).

For thirty-one years I struggled with a remarkable conundrum. Every fall and summer I taught a required seminar in the Literature and Criticism doctoral program at Indiana University of Pennsylvania (IUP) called “The History and Theory of Criticism.”

Having that opportunity was remarkable because it was exactly what I wanted to do; it was a conundrum because there was simply no way to “cover” a time frame that stretched from the origins of Western civilization to the twenty-first century.

How, my students always asked, can anyone relate such huge time frames to such historically particular problems as escalating inequality and global climate change?

My recent book Just Theory (NCTE, 2019) represents my response to this challenging question. I was especially grateful, therefore, that NCTE agreed to publish this book because it traces the links between powerful strains of the Western philosophical tradition and the institutional history giving rise to the major sub-disciplines of English studies, mainly literature and composition. I also wanted to tell such a sweeping story in ordinary language, accessible to students and non-specialists

Again, my students understood the recurring problem with those lofty aims: the common sense of our age is that anything that does not improve an individual’s competitive advantage in the marketplace is just theory, as in useless verbiage cluttering up the real business of getting a job and making money.

But there is no such thing as just theory—that is, so long as you understand the word “just” as a synonym for “only,” as in the belief that some set of ideas can be only theory, and have nothing to do with practice, the physical world, the political economy, or everyday living.

The title of this book thus plays off a pun resonating both an ironic and a literal meaning of the word “just”: just meaning only, and just meaning fair.

In the first sense, the book title is ironic because it is a distinctly false theory that the essence of pure theory can be divorced from history, politics, economics, and ecology; as if theory could be only itself, just theory.

In the second sense, what I have been calling just theory is a literal, non-ironic, evaluative term naming the good kind of theory that contributes to making the world a more just place. Just theory includes both the negative critique of oppressive hierarchies and the positive affirmation of life-sustaining possibilities.

The good news is that there are more examples of just theory in the archives of our cultural history than one might otherwise imagine. In our age of escalating inequality, rampaging climate change, and increasing authoritarianism, it is no wonder that so many people around the world have expressed more concern about issues of social justice. Just Theory tries to address those concerns.

But, of course I had to make some severe concessions by creating a narrative frame that allowed me to leave out so much.

Big risk, I know, but I situated the production of theoretical texts within the geopolitical economy of just two pivotal cultural turns: Cultural Turn 1 (roughly 450–350 BCE) looks at the Platonic revolution, during which a new philosophic, universalist, and literate discourse emerged from an oral culture; Cultural Turn 2 (roughly 1770–1870) investigates the Romantic revolution and its nineteenth-century aftermath up to the Paris Commune. The effects of this influential history have circulated all over the world and dramatically shaped our lives in the twenty-first-century.

In CT2, I highlight the ideological battles between radical Romanticism and Romantic idealism, partly because the consequences of those struggles yielded some troubling disciplinary hierarchies within our field.

How can theory help us to negotiate these local terrain battles without diminishing our contribution to the larger tasks facing our planet?

In our ‘post-truth’ era of fake news, how can we increase our students powers to recover what is common as well as what is different among all peoples, not just privileged individuals or cultures? How can we help our students to access a useable history of critical theory so they can see theorizing as a fundamental way of being in the world, a way of reflecting on, and therefore aiming to ameliorate, painful and unjust situations?

There are, of course, risks in this process of “scaling,” moving from the particular and concrete to the general and abstract. Theory’s movement toward higher levels of abstraction can aid the need for detachment from national, ethnic, and other localized forms of attachment.

But there is no way to completely avoid those oscillations without sliding into religious and ethnic fundamentalism. Resisting that destructive closure remains the common ground for all of us students and teachers devoted to invigorating the critical powers of social, cultural, and digital literacies. David Downing retired in May, 2019 from his position as Distinguished University Professor of English at Indiana University of Pennsylvania. For nine years (2008-17), he served as Director of the Literature and Criticism doctoral program.

Read a sample chapter or order this book.