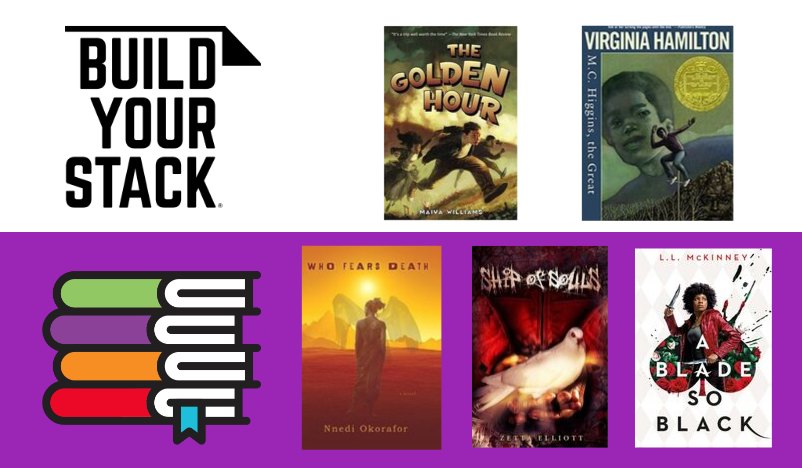 Build Your Stack® is an NCTE initiative focused exclusively on helping teachers build their book knowledge and their classroom libraries.

I have loved speculative fiction my entire reading life, but science fiction (SF) has always been my favorite subgenre. There was something freeing about envisioning a future wrought with undiscovered possibilities; understanding a universe beyond the immediate realm of my real-life experience; and imagining innovations that could impact how the current world shifts and changes.

However, even though I loved reading and writing SF, I kept my love for the subgenre secret in middle and high school because, according to most of the people I knew, SF was not written or created for Black girls.

At the time, the idea that I was not allowed to enjoy SF because I was Black and because I was a girl baffled me. I did not understand why people wanted to put my reading options into a box. However, I soon discovered why so many people were in disbelief: there weren’t that many SF books written by Black authors and published through traditional publishing houses, and there weren’t that many SF books with Black protagonists, female or male. In fact, the only stories I saw were those in which Black characters consistently dealt with suicide, poverty, family death, and sexual assault. Black people were hardly even mentioned as existing in the future. So how could SF be written for Black girls if we weren’t writing them and we weren’t included in them?

Instead of attempting to answer this question as a young girl, I read whatever SF books I could find, kept my preferences to myself, and continued to wonder when I would see a mirror of myself in a SF story.

Sadly, it was not until college that I learned about the existence of Octavia Butler, a Black female SF author who won Hugo and Nebula awards and was the first SF writer to receive a MacArthur Fellowship. I stumbled across Parable of the Sower, and I was amazed at the ways in which Butler’s main character, Lauren, spoke to me. Yet, I was introduced to her work in the mid 2000s, when the book was published in 1993. It was at that point that I realized the limited access I had to the wonderful SF books written by and about Black women and girls during my younger years.

But the current generation of students, generally, and Black girls, specifically have broader access than I had, and educators and librarians are key to assisting youth in finding these stories (See my article“I didn’t know that people of color writing science fiction was a thing”: The Influence of Librarians on Black Girls’ Access to Science Fiction.” )

Here’s a list of books and authors worth investigating, to ensure that your classroom library has a wealth of Black authors and protagonists to enrich the reading lives of Black girls—and all students in your classrooms. Mayo Cornelius Higgins sits on his gleaming, forty-foot steel pole, towering over his home on Sarah’s Mountain. Stretched before him are rolling hills and shady valleys. But behind him lie the wounds of strip mining, including a mountain of rubble that may one day fall and bury his home.

M.C. dreams of escape for himself and his family. And, one day, atop his pole, he thinks he sees it—two strangers are making their way toward Sarah’s Mountain. One has the ability to make M.C.’s mother famous. And the other has the kind of freedom that M.C. has never even considered. Still deeply affected by their mother’s death the year before, Rowan and Nina are invited to their Aunt Agatha and Aunt Gertrude’s home in Owatannauk, Maine. Rowan would rather be home playing video games, but that’s before he meets Xanthe and Xavier. Sephy is a Cross: she lives a life of privilege and power. But she’s lonely, and burns with injustice at the world she sees around her.

Callum is a nought: he’s considered to be less than nothing—a blanker, there to serve Crosses—but he dreams of a better life.

They’ve been friends since they were children, and they both know that’s as far as it can ever go. Noughts and Crosses are fated to be bitter enemies—love is out of the question.

Then, in spite of a world that is fiercely against them, these star-crossed lovers choose each other.

But this is love story that will lead both of them into terrible danger . . . and which will have shocking repercussions for generations to come. A mysterious bird leads D and his friends on a perilous journey that will take them from Brooklyn to the African Burial Ground in lower Manhattan, and into the very realm of the dead.

This unique blend of speculative fiction and history explores the quest for belonging and the power of friendship. In a futuristic Africa, the Nuru people desire to exterminate the people of Okeke through genocide. However, there is one-member left standing in the Okeke village. After being raped and impregnated, Najeeba escapes into the desert where she gives birth to a baby girl who appears to be far different than she. Naming her, Onyesonwu, meaning “Who Fears Death?, Onyesonwu grows up to be fearless, taking on the journey of ending the genocide of her people. The dead began to walk the battlefields of Gettysburg, Pennsylvania—derailing the War Between the States, ultimately changing America forever. Because of laws like the Native and Negro Education Act, Jane McKeene is studying to become an Attendant in order to keep the citizens of America safe, by learning to put down the dead. Since this is not the life she envisions for herself, Jane is focused on returning to her hometown Kentucky. However, when families in Baltimore County begin to go missing, Jane finds herself fighting for her life against some powerful adversaries. Bianca and her best friend, Lonnie, are in an awful car crash. She wakes up in the hospital, almost paralyzed by her injuries, and is faced with questions she is unable to answer. Taking the easy road, she chooses to try a new virtual-reality version of Minecraft, which will grant her every wish. In exploring this new world, she goes on an adventure to find Lonnie and ends up meeting new friends along the way. Artist June Costa dreams of attaining fame in the lush city of Palmares Tres. However, her dreams of fame become something more when she encounters Enki, the Summer King. Though everyone is enamored by him, June sees something deeper, recognizing him to be an artist like herself. Together, they join a rebellion against the government and their relationship grows deeper into love. Unfortunately, Enki is destined to die, like all Summer Kings before him. A Blade So Black
L.L. McKinney

Alice’s life is at risk whenever the Nightmares appear. Though she is trained to battle the monstrous creatures in Wonderland, with the use of her magic weapons, she still struggles with defeating them. When her handsome and mysterious mentor is poisoned, Alison is forced to find the antidote. This requires her to explore Wonderland in a way that she hasn’t before. At an exclusive Manhattan ballet school, friends Gigi, Bette, and June go to great lengths to be the best, even if it means going against each other. Gigi is a free-spirited dancer; Bette is a privileged New Yorker who is dying to escape the shadow of her ballet-star sister; while perfectionist June is desperate to land a lead role this year to prevent her mother from stopping her dream of dancing forever. Stephanie Toliver is a PhD candidate in language and literacy education at the University of Georgia, and she is a 2019 NAEd/Spencer Dissertation Fellow. Her research focuses on representations of and responses to people of color in speculative fiction.