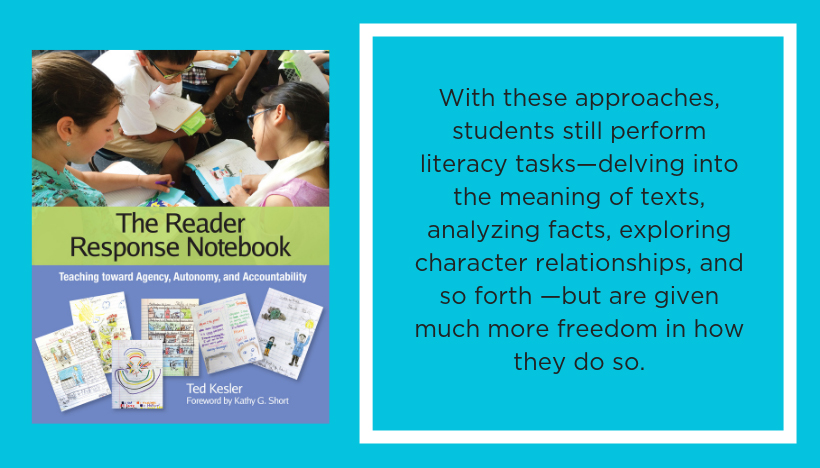 A portion of this article by Lorna Collier appears in the September 2019 Council Chronicle.

For decades, English teachers have used reader response notebooks to help ensure their students are reading—and understanding—the books or other texts they’ve assigned. The “responses” they assign are typically structured, expository writing tasks, such as creating summary paragraphs or answering text-related questions. Teachers often are the only audience for this writing.

However, some educators say there are other, more effective ways to use reader response notebooks—ways that can help engage and excite students, potentially creating lifelong readers.

“We approached it with way more playfulness, and were always willing to be surprised—pleasantly surprised—by what the children were doing,” says Ted Kesler, associate professor of elementary and early childhood education at Queens College in New York and a former New York public elementary school teacher.

Kesler worked with teachers and students in second- through fifth-grade classrooms at the PS 144 elementary school in Queens to explore new strategies for reader response notebooks, a longtime interest of his. He shared his approaches in a recent book, The Reader Response Notebook: Teaching toward Agency, Autonomy, and Accountability, (NCTE 2018), which he says builds on processes developed by other educators.

In examining the use of notebooks around the country, Kesler discovered many are being used “in very pedestrian and boring ways.”

To support richer learning,  he argues that restrictions on how students respond in their notebooks should be eased. He suggests allowing students to not just write responses, but also include drawings, comic strips, diagrams, charts, and other graphic elements.

With these approaches, students still perform literacy tasks—delving into the meaning of texts, analyzing facts, exploring character relationships, and so forth —but are given much more freedom in how they do so.

Each student Kesler worked with was given a bound notebook to use and was free to decorate the cover in any creative way they chose. (Kesler prefers print because it’s universally available, but says other teachers may prefer to use digital texts.) Students initially used notebooks in class, then as they took on more responsibility, began completing lessons at home. Each response was to take no more than 15 minutes, and students were expected to do two to three per week.

Students also were encouraged to share what they wrote with their peers. One favorite way to do this was dubbed “Speed Dating.” Students would mark several of their top responses with sticky notes, line up their seats in rows facing each other, then take turns (for 3 minutes) sharing these with a partner.

During the next 20 minutes or so, they would turn their seats to face new partners, sharing responses with about seven other students. This helped them learn techniques they could incorporate in their own books going forward.

Group discussions—in small groups or classroom-wide—sometimes involved sharing and talking about responses. Exercises like “Pass the Notebook,” in which students looked through each other’s books for several minutes, also gave students inspiration, through the neatness, variety, or thoroughness of others’ responses. (Notebooks also were graded on these criteria.)

The new approach to reader response notebooks led to students being “excited about writing about their reading,” wrote fifth-grade teacher Lesley Doff—a contrast from past years, when she’d tell them: ” ‘Write a three-sentence summary,’ or something they didn’t want to write, and I didn’t want to read.” Now, she says, students “have great things to say.”

Victor, a third grader, explained that the notebook helped him organize his thinking and pay closer attention to characters, as well as facts and details “that I might otherwise have disregarded.”

Fifth grader Phillip said his notebook helped him express his creativity, adding: “I don’t think of our writing as a big boring essay anymore.”

Third grader Sean noted the process of getting his ideas on paper had helped him discover not only that “I’m smarter than I think” but also that he has “a liking for books.”

Kesler hopes to see more elementary and perhaps middle schools adopt the way he uses reader response notebooks so the practice can become ingrained. He’d like to research how the approach impacts student achievement and reading habits.

He believes his strategies are especially well suited for struggling or reluctant readers, who may find traditional response writing discouraging and dispiriting.

The teachers Kesler worked with enjoyed being surprised by their students’ creativity and looked for the intelligence displayed in their reading responses, as opposed to policing how well they followed rigid expository writing rules.

“That’s a paradigm shift away from the way notebooks were used before,” says Kesler.

Lorna Collier’s articles about education and technology have appeared in US News & World Report, the Chicago Tribune, and MSN.com. Reach her at lorna@lornacollier.com.

Ted Kesler describes 28 different reader response strategies in his book. To learn more about these and about new ways to use reader response notebooks, follow his blog.