Build Your Stack: Memoir and Reading Choice - NCTE
Back to Blog 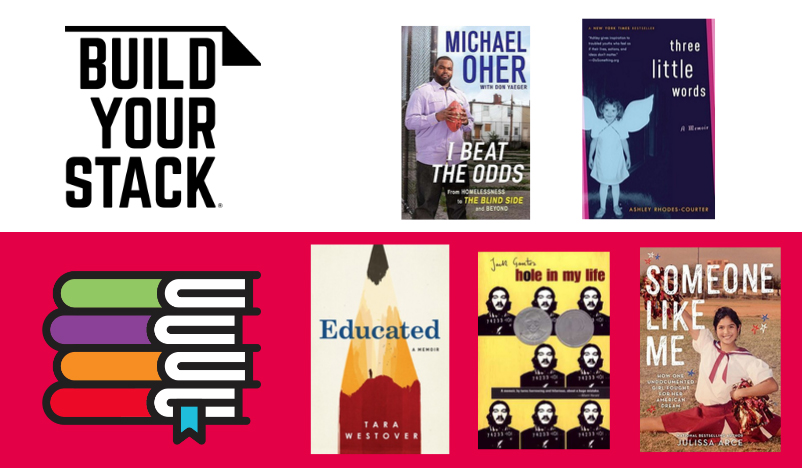 This blog post was written by NCTE member Carolyn Ford. It is part of Build Your Stack,® a new initiative focused exclusively on helping teachers build their book knowledge and their classroom libraries.

In 2017, after what felt like forcing my sophomores through Elie Wiesel’s Night—and after reading John Hattie’s Visible Learning—at the end of the unit, I gave my students an anonymous survey asking them how much of Night they had read. “Know thy impact,” says Hattie. Was this powerful, Nobel-prize winning author having an impact on them?

48%. I was deeply distraught about this. Night was so moving, so personal, so important. How could half of my students not want to read that book? How would they ever become better readers—better people, even—if they didn’t read about other’s lives?

I decided to offer students choice in what they read and see if that would improve their ability to finish reading their books. Additionally, I would track their reading ability on our district’s reading mastery tool and compare their growth to my students’ previous years’ growth.

Nearly all of my “regular level” students are reluctant readers: Some loved reading when children but stopped reading for pleasure as teens; some will reluctantly read (for some this means read-and-skim) a required book for English; some have not read an entire book since sixth grade.

Would a highly structured unit that let them choose their book get them to read more? This is what I tasked myself with all year.

The last unit I created was a memoir unit around the theme of overcoming adversity and finding purpose. With the help of our ace school librarians, I drafted a list of nine titles at different reading levels, and I also include Tara Westover’s Educated, which I use to introduce the unit and discuss features of memoir writing. Books in this list are loosely organized from easier to more challenging reading levels. An instant #1 New York Times bestseller, this is Jaycee Dugard’s raw and powerful memoir, her own story of being kidnapped in 1991 and held captive for more than eighteen years. Anthony Robles’s Unstoppable: From Underdog to Undefeated: How I Became a Champion

Anthony Robles is a three-time all-American wrestler, the 2011 NCAA National Wrestling Champion, and a Nike-sponsored athlete. He was also born without his right leg. Doctors could not explain to his mother, Judy, what led to the birth defect, but at the age of five, the one-legged toddler scaled a fifty-foot pole unassisted. From that moment on, Judy knew that her son would be unstoppable. Julissa Arce’s Someone Like Me: How One Undocumented Girl Fought for Her American Dream

This surprising, at times heart-wrenching, but always inspirational story takes readers deep into the little-understood world of a new generation of undocumented immigrants in the United States today—children who live next door, sit in your classrooms, or may be among your best friends Howard Wasdin’s I am a Seal Team Six Warrior: Memoirs of an American Soldier

I Am a SEAL Team Six Warrior is the dramatic tale of how Howard Wasdin overcame a tough childhood to live his dream and enter the exciting and dangerous world of US Navy SEALS and Special Forces snipers. Three Little Words details the inspiring true story of the nearly ten years Ashley Rhodes-Courter spent in the foster care system. Despite all odds against her, Ashley triumphed over painful memories and real-life horrors to ultimately find her own voice. Jack Gantos’s Hole in My Life

In Hole in My Life, this prizewinning author of over thirty books for young people confronts the period of struggle and confinement that marked the end of his own youth, and how, once he was locked up in a small, yellow-walled cell—he moved from wanting to be a writer to writing, and how this helped him endure and ultimately overcome the worst experience of his life. Michael Oher’s I Beat the Odds: From Homelessness to The Blind Side and Beyond

The football star made famous in the hit film (and book) The Blind Side reflects on how far he has come from the circumstances of his youth in this inspirational New York Times bestseller. The compelling, inspiring, and comically sublime story of one man’s coming-of-age, set during the twilight of apartheid and the tumultuous days of freedom that followed. Liz Murray’s Breaking Night: A Memoir of Forgiveness, Survival, and My Journey from Homelessness to Harvard

Breaking Night is the stunning memoir of a young woman who at age fifteen was living on the streets, and who eventually made it into Harvard. Tara Westover was born to survivalists in the mountains of Idaho. The family was so isolated from mainstream society that there was no one to ensure the children received an education. Tara began to educate herself, teaching herself enough mathematics and grammar to be admitted to Brigham Young University. Her quest for knowledge transformed her, taking her over oceans and across continents, to Harvard and Cambridge. Only then would she wonder if she’d traveled too far, if there was still a way home.

(Tara Westover will be the Sunday keynote speaker at the 2019 NCTE Annual Convention.)

Students divided the book into three parts and read a part a week. They created a reading goal. For many it would be “finish the book”; others had loftier goals of being able to truly understand the author’s experience and be moved by it. Each week, they had a reading quiz and group discussion.

I give time in class to read because I value it, and I have found that this is a practice that supports reluctant readers to actually read. During the unit, students were encouraged to search the internet and YouTube for interviews about their memoirist, recording their observations and ideas in an annotated bibliography.

“My book—I’ve been wanting to read it since the beginning of the school year.”

“Loved reading about a real situation and being able to look up videos and articles about the person.”

“I liked it because the books were very emotional, and it was an experience someone had gone through. It felt real.”

“I liked the book that I read. It made me want to keep reading more memoirs.”

How did teaching memoir affect students as learners? Was it moving, informative, and powerful? Their writing suggests so.

Because this was the last unit of the year, students could choose what they wanted to write about and in what style.

Students wrote movingly about a variety of topics, from the psychology of kidnappers (research paper for A Stolen Life) to the need to decriminalize marijuana (argument paper for Hole in my Life) to narratives about people the students knew who have overcome adversity. From this I learned that one of my student’s older brothers barely survived his senior year because he was so deeply into drugs. I learned about a student’s friend who was Muslim throughout her childhood but was now afraid to tell her parents that she secretly had become Christian. I learned about the inciting incident that led to one student’s parents’ divorce—and her mom’s subsequent unraveling that lead to their homelessness.

My students’ standardized reading test growth scores tripled and nearly quadrupled from what they were in the years I did not offer choice.

Some administrators might favor that data point, but I prefer data like this one, reflected upon by a student at the end of the year:

“Last year, I didn’t read any of the books we were assigned. However, I read every single one of my books this year, and I didn’t have to force myself to read. I took my books everywhere from Drivers’ Ed lessons to boring family parties.”

My first year teaching a curriculum that was fully choice was transformative for me as a teacher. Teaching the reading of memoirs helped me get there. Carolyn Ford has been teaching English for more than 20 years at Maine South High School in Park Ridge, Illinois. Her Twitter handle is @CarolynKFord1.