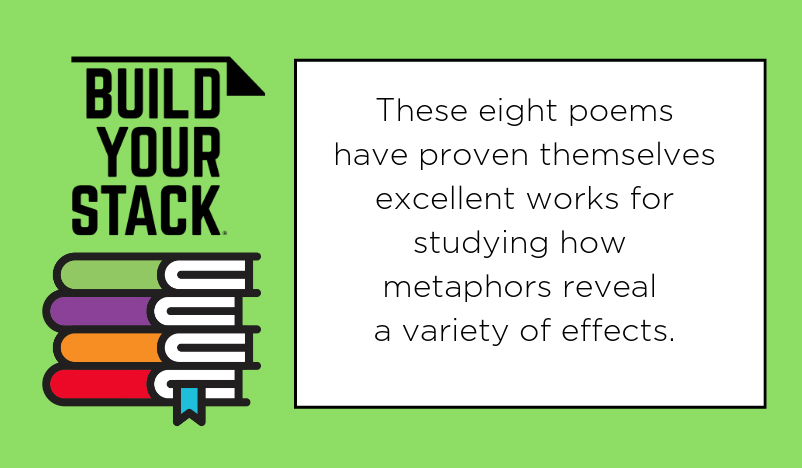 This blog post is part of Build Your Stack,® a new initiative focused exclusively on helping teachers build their book knowledge and their classroom libraries. It was written by NCTE member Wesley Matlock.

To rework an old adage: the divine is in the details. And poetry is the best medium for parsing details for greater reward.

In a previous #BuildYourStack post, I shared four public-domain poems to draw students into diction-level detail to promote discussion of thematic content. This time, I’m sharing eight public-domain poems that are perfect for teaching how to explore the power of metaphors.

Since metaphors express images, emotions, actions, experiences, and nuances through direct and indirect comparisons, attentive readers can grasp deeper levels of meaning in the text with careful analysis. However, in practicing this level of analysis, finding ideal poems can be difficult. In selecting a good poem for practicing analyzing and explaining metaphors, I look for the following:

To that end, I’ve been working with eight poems that have proven themselves excellent works for studying how metaphors reveal a variety of effects:

“A Little Bird I Am” by Louisa May Alcott

“Humayun to Zobeida” by Sarojini Naidu

“The Fish” by Marianne Moore

The poems by Alcott and Lowell are ideal introductions to poems with a conceit, an elaborate or extended metaphor, and explore how additional metaphors enhance the poem’s premise.

The poem by Alice Dunbar-Nelson also deals with extended metaphors and is an excellent example of how metaphors can provide more depth to abstract concepts. Consider encouraging your students to use metaphors to explain what such concepts mean to them.

The poems by Ho and Millay are prime candidates for seeing how metaphors can reveal themes, with each offering a subversive take on our traditional spring associations of hope and renewal.

The poem by Sarojini Naidu serves as an exemplar of how close reading of metaphors can uncover the layered meanings within a text.

Finally, the poems by Moore and Rossetti are excellent examples of how a poet can use metaphor to enhance imagery.

Many exercises around analyzing and explaining metaphors can be repetitive and stilted. That’s why I’m glad to have these poems in my “stack” of works for teaching middle and high schoolers how to comprehend and appreciate the impact of well-crafted metaphors. Wesley Matlock is Project Manager at eNotes.com and an avid reader of whatever he can get his hands on. Before life in editing and publishing, he spent many years teaching English Language Arts from Moscow, Russia, to Seattle, Washington. He has presented at EFL conferences in Moscow, Prague, and Rome, all in service to advocating for student-centered learning experiences. He now works with a great team of literature enthusiasts who seek to make reading and teaching literature as enjoyable and rewarding as possible.