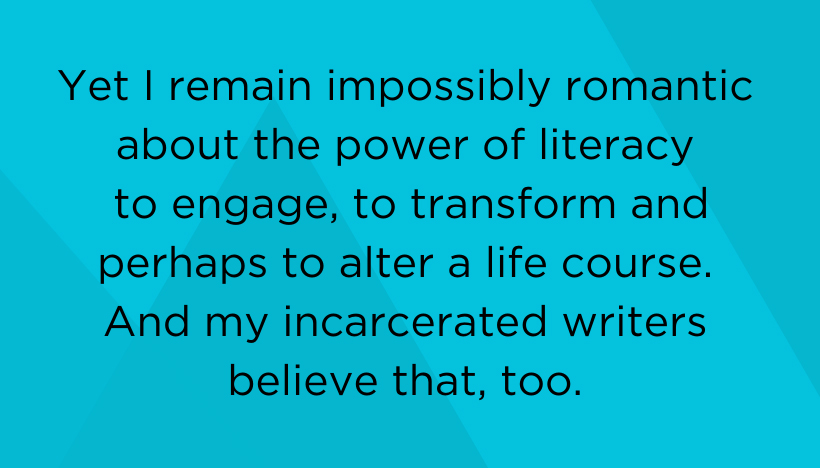 This post was written by NCTE member Deborah Appleman.

When I was a high school English teacher, I worked with students whom I thought were walking a tightrope between going to college and going to jail. They were smart but disengaged in school. They were interesting, good young people, who managed to get into trouble frequently. They often had complicated home lives. They didn’t see themselves as college material, nor, to be honest, did most of their teachers.

Until I began volunteering in the prison, my teaching life, first as a public-school English teacher and later as a college professor, insulated me so that I’d only seen the students who ended up in college. Now, after twelve years of teaching literature and writing in a high security prison for men, I see the other side, the ones who were not caught by the “catchers in the rye” we teachers sometimes fancy ourselves to be.

I think every schoolteacher should be a prison teacher, at least for a while. Although as a high school teacher I congratulated myself about the sense of urgency I felt about working with students who were in danger of leaving school, that urgency would have been fueled by a more acute knowledge of what was awaiting them.

There are students in my classes who were picked up at their high school by the police, who committed crimes as 15-year-old runaways, who moved from foster home to juvenile detention facility to a maximum-security prison, who have grown from boys to men . . . in prison.

Many of them are serving life sentences, with no possibility of parole, for crimes they were found guilty of while they were still adolescents. Yet they are avid readers and writers with keen intellectual appetites that were not fed in the high schools they sporadically attended, dropped out of, or were expelled from.

One evening in my Introduction to Literature class at the prison, as I was passing back interpretive essays on James Baldwin’s “Sonny’s Blues,” I stopped at Zeke’s desk and said, “This paper is amazing. Where did you learn to write like that? Where did you go to high school?”

“That’s probably because I never went to class,” he said. “And it’s too bad, because maybe if I had, I wouldn’t be here now.”

In that moment, I found myself wondering what might have happened if Zeke had been in one of my classes. Did I really believe that an appealing English class and an interested teacher would have made all the difference in the life of an urban youth with two loving parents, prone to depression, chemical use, and peer pressure? Of course not. The path to incarceration is too complex to be interrupted by a single positive educational experience. Besides, that kind of thinking leads dangerously into the “teacher as heroine mindset” (made popular by books and films, for example Dangerous Minds.) In my opinion, it is not only unrealistic; it is disrespectful and even patronizing for teachers, especially white female teachers, to cast themselves as heroes or saviors, especially of black and brown students in under-resourced schools.

Yet I remain impossibly romantic about the power of literacy to engage, to transform and perhaps to alter a life course. And my incarcerated writers believe that, too.

In every writing class I teach, I ask the students to compose a writer’s statement.  Here are excerpts from just a few:

I write because I don’t have a choice. Who else is going to be my voice, tell my story, and show my pain? Who will explain the failures of my generation? Who will teach them what I have learned? Who will inspire? —China

I believe writing can heal the deepest gashes and restore a fragmented soul. My words are all I have and just knowing someone reads it makes me feel alive. —Johnny

I find writing to be a practical means of liberation that calls for hard work and dedication, passing a simple task of enduring an oppressive setting. I see writing as a way to remain available amongst a disenfranchised population. There is a constant audit within my soul as I struggle to appraise my worth, examining my place in this society and what brought me here. —Chris

It is much more likely that those of you reading this blog can effect change within your English/language arts classrooms rather than within the walls of a prison. Perhaps we can capture the imaginations and talent of men like these before they are captured by other forces. If only I had known as high school English teacher what I have learned teaching in  prison.

Portions of this blog appear in Words No Bars Can Hold: Literacy Learning in Prison, W.W. Norton.

Deborah Appleman will also be presenting on this topic at the 2019 NCTE Annual Convention: Interrupting the School to Prison Pipeline: Shared Inquiry in ELA Classrooms, Nov. 21, 2019, 2:30 p.m.–3:45 p.m. Deborah Appleman is the Hollis L. Caswell Professor of Educational Studies at Carleton College and a former high school English teacher. She has also been a visiting professor at Syracuse University and at the University of California-Berkeley. She is the author/coauthor of eleven books on adolescent literacy; her most recent book, Words No Bars Can Hold: Literacy Learning in Prison, springs from her recent research teaching college-level writing and literature courses at a high-security correctional facility for men. She and her incarcerated students published an anthology of creative writing titled From the Inside Out: Letters to Young Men and Other Writing.