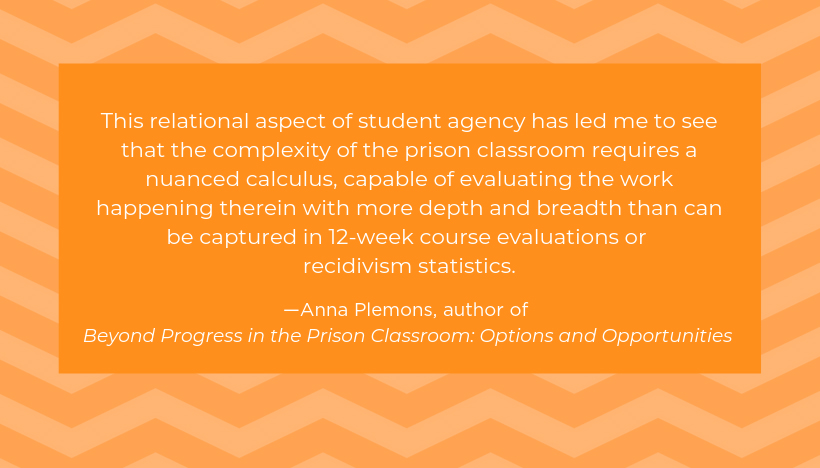 This post was written by NCTE member Anna Plemons, author of Beyond Progress in the Prison Classroom: Options and Opportunities (CCCC Studies in Writing & Rhetoric Series, 2019).

The claim that short-term, individuated measurements cannot account for all that happens in a classroom has purchase across a broad range of educational research contexts.

For me, the salience and urgency of this claim has come into sharp focus in the maximum-security prison where I have had the privilege of teaching since 2009.

In that time, I have come to see that the ubiquitous image of the autonomous, incarcerated student, waiting helplessly for an academic or behavioral intervention is a misleading and inadequate representation of life inside.  Within the Arts in Corrections (AIC) program where I have worked, incarcerated students operate with an important degree of agency, even if that agency doesn’t directly impact the legal terms of their incarceration.

For example, I have noticed that students integrate and leverage their classroom experiences in the maintenance of relationships they have inside and outside the prison. This relational aspect of student agency has led me to see that the complexity of the prison classroom requires a nuanced calculus, capable of evaluating the work happening therein with more depth and breadth than can be captured in 12-week course evaluations or recidivism statistics.

Relational agency in the AIC program has taken many forms—some have been surprising—and almost all have required time for building trust and respect:

“[In the AIC program agency] looks like Northern and Southern Mexican gang members smuggling poems to each other through an intermediary, since gang code demands that all face-to-face encounters occur with makeshift weapons in hand. Sometimes it looks like the penning of a political essay for an independent Bay-area newspaper. . .Individual agency in prison might even look as ordinary as having the choice to split a sandwich. In one of the most powerful scenes from At Night I Fly, a heated conversation breaks out between AIC participants discussing cross-racial friendship. The conversation begins after Jack, who is white, admits that although the classroom camaraderie and mutual respect is important to him, he is unwilling to acknowledge his cross-racial friendships on the yard with its rigid and often bloody racialized codes. That scene was likely filmed in 2003.

I met Jack in an intensive journaling class seven years later in 2010. In my class, he wrote about an event in which inmates ate with visiting community members. Real food was served—sandwiches with lunch meat, mayo, fresh lettuce, and tomato. Jack wrote about reaching for the last sandwich left only to have a black inmate ask him to split it. He draws the reader into his very real and serious dilemma, pondering the consequences of this one racialized act. In the end, he split the sandwich. When Jack finished reading the piece to the class, another writer in the group, Eugene, admitted that he was the man with whom Jack had shared the sandwich. Eugene told Jack how important that moment was for him and marked it as significant in his own process of building cross-racial trust.

The two men stood to hug. As I watched, I did not understand that Jack had been weighing the choice to publicly out himself as a wavering white supremacist for the better part of a decade. When I realized how long it took Jack to make the choice to share the sandwich and then eventually write about it, I knew we needed theories and methodologies for the classroom that could make sense of and support protracted relational processes. I don’t know that Jack was transformed in a permanent sense after splitting the sandwich; he was transferred shortly after the incident. But I do know that during his ten years at New Folsom, Jack grappled in very real ways with issues of relationality and relational accountability, and that he used his limited agency to build relationships of consequence.” (29)

The story of Jack splitting a sandwich is one of many stories that have informed my desire to see a wider range of theories and methodologies adopted, both in the prison classroom, and in classrooms beyond the walls, where similar relational principles and practices are at play.

In Beyond Progress in the Prison Classroom, such stories are folded in to a discussion of some of the Indigenous scholarship that makes space for a rich and robust theorizing of relationality.  The book also includes examples of projects that have employed a relational methodology and ends with a timely conversation about issues of complicity and ethical use of scholarship outside of one’s own cultural context. Anna Plemons is a clinical assistant professor at Washington State University-TriCities, where she teaches in the English and Digital Technology and Culture programs. Since 2009 she has also taught nonfiction narrative through the Arts in Corrections program at New Folsom Prison. She has published work related to prison education in Teaching Artist Journal, Community Literacy Journal, and the edited collections Prison Pedagogy: Learning and Teaching with Imprisoned Writers (2018) and Critical Perspectives on Teaching in Prison: Students and Instructors on Pedagogy Behind the Wall (2019).

Read more or order a copy of  Beyond Progress in the Prison Classroom: Options and Opportunities (CCCC Studies in Writing & Rhetoric Series, 2019).