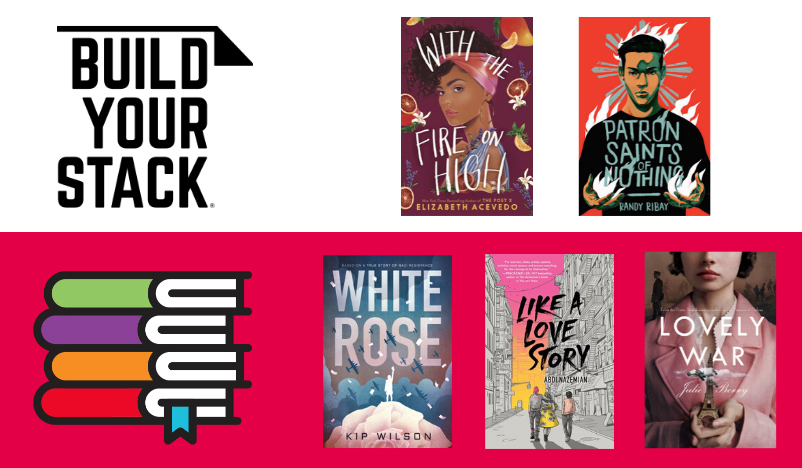 This post by NCTE member Bryan Gillis is reprinted with permission from the blog of ALAN, the Assembly on Literature for Adolescents of NCTE, and features this year’s Walden Award Winner finalists and winner and an interview with Julie Berry, winner of this year’s Walden Award. This post is presented as part of Build Your Stack,® an NCTE initiative focused exclusively on helping teachers build their book knowledge and their classroom libraries.

I had the privilege of serving on the Walden Committee this year, and am very proud of the work that our committee accomplished. (See end for list of committee members.) Over the course of ten months, each member read hundreds of young adult books, spent hours in discussions, and ultimately had to make some extremely difficult decisions. The four finalists and the winner, Lovely War, are reviewed below by five of our committee members. And don’t miss the interview with Julie Berry, author of Lovely War (following the book reviews). 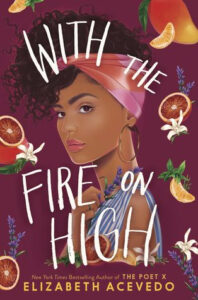 Emoni Santiago is most at home in the kitchen. She would love nothing more than to be a chef when she graduates from high school, and even has an opportunity to visit Spain on a trip with her culinary arts class. But Emoni has responsibilities outside of her school day that will likely make that impossible, namely raising her two-year-old daughter, Emma, with her abuela along with Emma’s father and his family. As Emoni progresses in her culinary arts class, it becomes clear that she has a bright future ahead of her, and as much as she doesn’t want to allow herself to dream that Spain is within the realm of possibility, it soon becomes clear to her teacher and classmates that Emoni is the person in her class that most belongs on that trip.

Elizabeth Acevedo’s debut novel The Poet X set the young adult world on fire with its fierce poetry, winning a spate of awards including the Printz and ALAN’s Amelia Elizabeth Walden Award last year. In Acevedo’s sophomore novel the fire literally continues, this time moving from verse to prose and from the slam poetry stage to the kitchen. Despite this change from poetry to prose, Acevedo is no less poetic in this novel’s descriptions, especially of the food, which will undoubtedly make readers’ mouths water. Luckily, there are a few recipes included to whet the reader’s appetite. Beyond the main conflict of Emoni’s struggle to find a way to go on her class trip to Spain (which initially proves untenable due to finances and childcare issues) is a sensitive story about a young girl navigating teen-parenthood, family dynamics, and romantic relationships. What stands out most about With the Fire on High is that it is not a cautionary tale about the perils of teen pregnancy. Instead, Acevedo provides readers with a nuanced look at the joys and complications of being a parent, no matter the age. 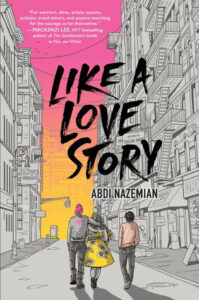 Like a Love Story focuses on three teens through the summer of 1989 in New York City, at the height of the AIDS crisis. Reza is gay and a recent immigrant, having left Iran with his mother to live with his new stepfather and stepbrother. Judy is looking for romance and aspires to be a plus-size fashion designer. She adores spending time with her uncle Stephen, an HIV-positive activist involved with ACT UP. Art is a photographer and the school’s only out—to a select few—gay student. He and Judy are best friends. Art struggles with being openly gay, especially at home, but he still hopes to become an activist like Stephen.

Through alternating points of view, readers are introduced to each character and their individual understanding of queerness during the AIDS crisis, and the possibilities of a future even when it seems that being gay is a death sentence. Reza is closeted and has no idea how to tell those around him, even Art, because of his fear that even admitting to being gay will make him more vulnerable to infection. Art just wants to get out and protest, knowing too many people within his queer community who have died or are dying.

Like a Love Story is an accessible, informative, and captivating look at the AIDS crisis through the eyes of teenagers, each of whom is exploring body image, racism, death, friendship, fear, history, activism, and politics of queerness in the Reagan years. A story of love and loss in all of its messy, chaotic beauty, this is a book worth adding to your classroom or library. 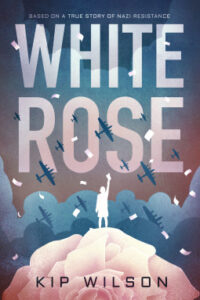 White Rose recounts the story of how Sophie Scholl grew into her role as the venerated political activist. We live in Scholl’s head during her evolution. We move with her as she emerges from being a young girl sketching and picking daisies in the German countryside to becoming a university student fighting for change. It is a brilliant coming-of-age story where love, fidelity, justice, gender, sexuality, and activism each play a significant role. The novel begins at the end of Scholl’s story and concludes with her execution and hope. Hope for a better life. Hope that action will enact change, no matter how small or insignificant that action might seem.

Kip Wilson’s debut novel is masterfully crafted. It is well-researched and the back matter is just as rich as the novel itself. Wilson’s choice of verse could at times leave the reader wishing for more in-depth development of the characters, but this is where the beauty of Wilson’s verse lies. The reader is asked to stretch and wrap their minds around the disturbing complexities of war, while making connections and viewing the world from a new perspective. Although the inevitable ending is tragic, Wilson imbues it with hope, freedom, and potential. Although dealing with the atrocities of World War II, it is incredibly timely as readers will sympathize with Scholl’s feelings of impotence in the face of political machines. Not only does Wilson address political activism, she provides space for discussion on gender and sexuality. This text is ripe with opportunities for the classroom. A beautifully written piece that deserves its place on every bookshelf. 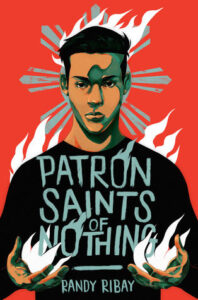 Randy Ribay’s The Patron Saints of Nothing is a powerful, layered, complex coming-of-age tale. Jay Reguero is a typical American teenager who likes to play video games and spend time with his best friend. That’s pretty much all he plans on doing as he wraps up his senior year before heading off to the University of Michigan. That is until he learns that his cousin Jun has died. Jay and Jun lost touch a few years back, mostly due to Jay being too busy to return Jun’s letters, but they were very close when the Regueros lived in the Philippines. Jay is devastated when he learns of Jun’s death and feels guilty for not reaching out to him as they grew older. He blames himself for the emotional distance that came between them. But when he learns that Jay was a victim of President Duterte’s war on drugs, he decides he must return to the Philippines to find out what really happened to his cousin. If he can’t bring back his cousin, he feels he must, at the very least, eliminate the physical distance between them. He manages to convince his parents to allow him to return to the country of his birth and sets out to spend his spring break visiting family and trying to find out what really happened to Jun.

Jay returns to the Philippines assuming he will find a country and family he knows and remembers, but everything is different. While he was born there, he does not feel Filipino most of the time, and this is only magnified as he digs deeper into Jun’s life. Jay slowly learns more about Jun’s family and his own. His cousin Grace isn’t the bookish snob he assumes she is and his uncle isn’t the grieving father he expected to find. In fact, Jay is shocked to learn that his uncle, a police officer, seems to be a Duterte supporter. And just who is Grace? As Jay uncovers more about his family and their lives in the Philippines, he begins to feel more connected to the country. What he finds is surprising and leads him to question his own biases and what he remembered about his cousin. Can we ever truly know a person? Are people all good or all bad with no in-between?

The Patron Saints of Nothing is a beautiful story about guilt, grief, family, and faith. Ribay, a high school English teacher, has created authentic characters and treats teenagers as capable readers who can handle tough issues. This is a compelling coming-of-age novel that gives teens insight into the political landscape of the Philippines and the devastating repercussions of Duterte’s war on drugs. The novel tackles tough issues, but it does so deftly and with hope, even as the real-life situation is ongoing. The story is full of authentic teen voices and emotionally raw and touching circumstances. While at times a quiet novel, it allows the reader to meditate on the power of truth. The message is clear. We must see the good in all people, despite their imperfections. 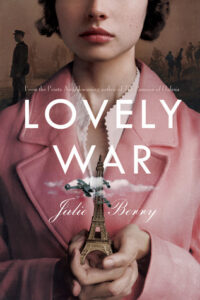 Hazel and James, Aubrey and Colette: four teenagers’ lives cross paths as they experience great love and great loss against the manic backdrop of World War I Europe. A classically-trained pianist from London, Hazel falls for James, also British, an aspiring architect and soldier just as he is about to ship out to France. Born in Harlem, Aubrey is a ragtime virtuoso, master of improvisation, serving in the racially-segregated US Army. Belgian orphan Colette has a soaring singing voice and a deeply tragic past. Their fates entangle in France, hanging precariously from the cliff’s edge of the war and madness raging around them.

The chapters are narrated by the gods of Greek lore. Aphrodite weaves the tales of the young lovers, while Ares details the brutal scenes of war. Apollo chimes in with musical and artistic developments, as Hades reveals numerous brushes with death. The result is a complex, richly-layered novel of exquisite detail and breathless suspense. Julie Berry’s masterful writing shimmers on every page.

Lovely War confronts a number of conflicts within its pages that remain unresolved in our own world and time. How do people respond to trauma? How do we heal ourselves and each other? How do music and art help us heal? How can we overcome the gender, racial, and ethnic barriers that lead to violent misunderstanding and the resulting trauma? These problems are situated in the context of WWI, but they are timeless in scope and breadth. Teens are experiencing these very issues today. Love triumphs. Love transcends. Love flickers then shines in the darkness. It is both human and mythical in its power. This universal, hopeful truth is what all of us need, especially the young for whom this world, in its rapid and unprecedented upheaval, is their inheritance.

The Assembly on Literature for Adolescents of NCTE (ALAN) promotes communication and cooperation among all individuals who have a special interest in adolescent literature, presents programs and conferences on this subject, promotes and increases the number of articles and publications devoted to it, and integrates the efforts of all those with an interest in this literature.