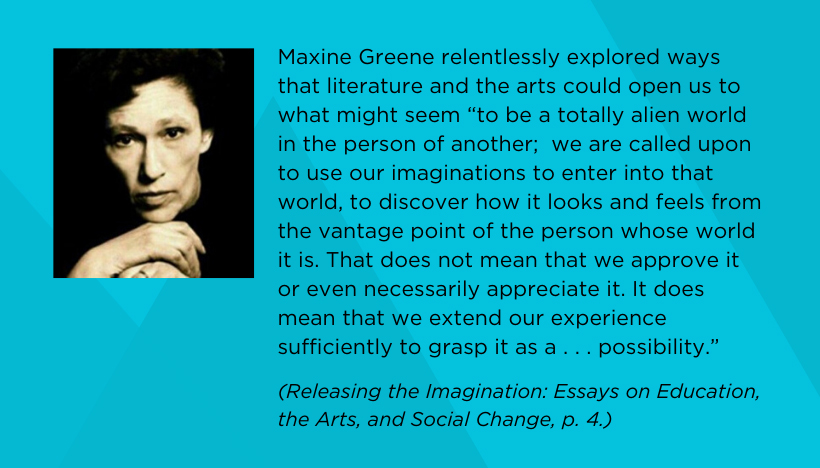 This post was written by NCTE member Janet Miller. Maxine Greene, Teachers College, Columbia University, was posthumously recognized as the recipient of the 1980’s Decade Award during the ELATE Luncheon on Friday, November 22, 2019, for “Toward Possibility: Expanding the Range of Literacy,” published in the December 1986 issue of English Education.

Throughout this reflection I refer to Maxine Green as “Maxine.” Maxine and I were dear friends and colleagues since 1974, when I first met her as a doctoral student at a curriculum theorizing conference.  She requested, nearer the end of her life, that I write her biography, and I’m also in the final stages of completing a book focused on her “key ideas.” (See end note.) I call her “Maxine” here not just because of our elongated friendship, but because everyone knew her and her work, and because she insisted that everyone call her Maxine.

Throughout her elongated and multiply awarded career, internationally renowned philosopher of education Maxine Greene (1917–2014), consistently mesmerized audiences worldwide with her brilliance, pervasive sense of humor, and willingness to reflexively question her own constructions of meaning.

In always pushing herself to work harder and longer against instances of injustice, Maxine especially inspired educators to fight against what she called “the plagues” of indifference, ignorance, and apathy.

Maxine was born and raised in Brooklyn, New York, where she often inhabited the Brooklyn Museum, located near her childhood home.  Able to read and to view all that surrounded her in the museum without distractions posed by her three younger siblings, she honed what became deep and life-long passions for literature and the arts. Maxine early on experienced these as providing incentives to both imagine and take action to achieve a more just and humane world.

Graduating from Barnard College (with a slight interlude during which she almost succeeded in joining anti-fascist forces in Spain), Maxine subsequently earned her Masters and PhD at New York University. Her history and philosophy majors provided intellectual groundings for her ardent feminism, her activism against anti-Semitism, and her enactments as a (then-rare) woman philosopher of education who employed existential phenomenological perspectives, and centered literature and the arts within her philosophical inquiries.

Maxine initially was hired in 1965 by Teachers College (TC), Columbia University, to serve as Editor of Teachers College Record. Throughout her editorship, she also taught literature courses in TC’s English Education Program as well as in several local universities as an adjunct. Following her 1973 full-time hiring as an assistant professor within TC’s Philosophy & Education Program, Maxine continued to position literature and the arts as able to foster what she eventually called “social imagination”—“the capacity to invent visions of what should be and what might be in our deficit society, on the streets where we live, in our schools” (1995, p. 5). Such a version of imagination requires that one daily choose to work against the inequitable, the unjust, the unendurable.

Simultaneously serving as “philosopher-in-residence” for twenty-five years in summer sessions of the Lincoln Center Institute for the Arts in Education, Maxine relentlessly explored ways that literature and the arts could open us to what might seem

“to be a totally alien world in the person of another;  we are called upon to use our imaginations to enter into that world, to discover how it looks and feels from the vantage point of the person whose world it is. That does not mean that we approve it or even necessarily appreciate it. It does mean that we extend our experience sufficiently to grasp it as a . . . possibility.” (1995, p. 4)

Ultimately, Maxine argued that employing “social imagination” as enriched by literature and the arts could provide potent incentives for daily choosing to construct democracy, which always “is and has been an open possibility, not an actuality” (1978, p. 58).

In these current and difficult times, Maxine’s scholarship indeed appears more relevant than ever, not only for teachers of the English language arts, but also for all involved in educating.

Learn more by exploring the following books by Maxine Greene: 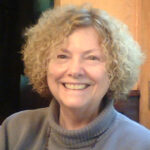 Janet L. Miller is professor emerita, Teachers College, Columbia University, New York, and faculty-at-large emerita, Graduate School of Arts and Sciences, Columbia University. Recipient of the 1991 James N. Britton Award for Inquiry in English Language Arts for her book, Creating Spaces and Finding Voices: Teachers Collaborating for Empowerment, Miller was elected in 2010 as an American Educational Research Association (AERA) “Fellow” for “sustained achievement in education research,” and in 2008, was honored with AERA’s Lifetime Achievement Award, Division B-Curriculum Studies. Miller’s forthcoming books include Maxine Greene and Education, an invitational volume in the Routledge “Key Ideas” series. Other books include Sounds of Silence Breaking: Women, Autobiography, Curriculum (2005) and her co-edited book, with Bill Ayers, A Light in Dark Times: Maxine Greene and the Unfinished Conversation (1998).