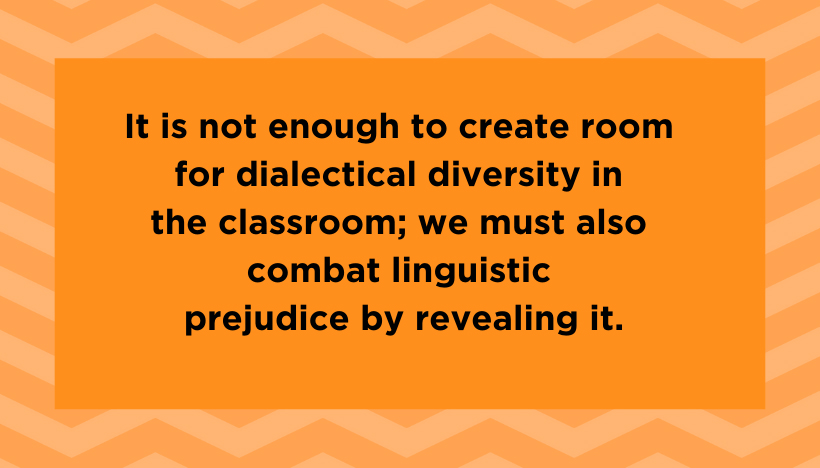 This post by NCTE member Catherine Savini is reprinted with permission from Inside Higher Ed (January 27, 2021).

A couple of years ago, I worked in the writing center with a student on a paper about her identity development. She received high marks for content but lost points for writing. As I read her paper, two things struck me: first, she had grown up in Boston, but her parents were from the Democratic Republic of the Congo. At home, she spoke Lingala, which she hid from her friends after she was mocked. Second, many of her sentences were indecipherable. She wrote, for example, “I didn’t have an indistinguishable surface hair from different females in my class and they wouldn’t converse with me or simply give me disposition since I didn’t seem as though them.”

After a decade of working in writing centers, I knew to ask, “Did you use the thesaurus to write this?” And she told me that, in an effort to sound academic, she had used the thesaurus for every single sentence in this essay about her own identity development. Teachers had told her not to write like she speaks but to translate her Black vernacular English (BVE) into standard academic English (SAE). I suspect that most of us would feel a flash of rage if we heard the insults slung at her for speaking Lingala, but many of us would also mark her down for writing in BVE. Why?

I spent decades operating with this cognitive dissonance. As a white, middle-class English professor, I’ve corrected a lot of sentences and made a lot of assumptions about people’s intelligence based on how they speak and write. As a Ph.D. candidate in English, I began to recognize the pain linguistic racism inflicts thanks to Gloria Anzaldúa, Amy Tan and James Baldwin, but somehow their work never caused me to question my approach to student papers.

But now, on my predominantly white campus, I regularly hear stories of linguistic prejudice perpetrated primarily against students, staff and faculty of color. It’s not just speakers of BVE; multilingual students have told me that if they are talking with a peer in their native language, they switch to English as soon as they enter an academic building. When one student explained to her professor that her sentences tended to be long because she is a native Spanish speaker, the professor responded, “You are not in Puerto Rico anymore.” Two Spanish-speaking students told me that their high school guidance counselors told them that they wouldn’t be able to succeed in college. (They have.) Many of these students have come to my writing center demoralized by papers covered with ink, marked with low grades and scrawled with directives to “go to the writing center.”

But we must teach students to write standard academic English, and we must mark them down if they do not meet those expectations — otherwise, they will not succeed in the real world, right? That is the traditional argument in favor of requiring all students to write in standard academic English in the classroom. Renowned literary scholar and public intellectual Stanley Fish defends this stance, explaining that it’s wonderful that people speak multiple languages and dialects, but the classroom is the place to learn to communicate in SAE.

On the opposite end of the spectrum, transdisciplinary scholar Vershawn Ashanti Young rejects standard language ideology as racist, arguing that we should invite students to weave multiple dialects. He calls this “code-meshing.” Responding to the argument that learning standard academic English will protect students of color from prejudice, Young writes, “But dont nobody’s language, dialect, or style make them ‘vulnerable to prejudice.’ It’s ATTITUDES. It be the way folks with some power perceive other people’s language. Like the way some view, say, Black English when used in school or at work. Black English dont make it own-self oppressed.” According to Young, if we value Black vernacular English and other dialects, we can shift racist attitudes rather than reinforce them.

A middle stance involves teaching students to communicate in standard academic English without degrading their dialect or home language by providing students with opportunities to use their dialects and languages in an academic setting and by exposing the power structures at work.

Ten years ago, I would have taken Fish’s approach and worked with the Congolese American student to revise her paper to meet the expectations of standard academic English. I would have identified “patterns of error,” focusing on grammatical issues that impeded meaning. I did not know then that the majority of linguists agree that all dialects are created equally, so I would have authoritatively taught her the “correct” subject-verb agreement without acknowledging that Black vernacular English has its own, equally legitimate grammar rules.

Instead, I took a Young-inspired approach with this student. First, I talked with her about the devaluing of her languages, both Lingala and BVE. Second, I emailed the professor and asked if the student could rewrite the paper in BVE. I attached Young’s “Should Writers Use They Own English,” where he advances a sophisticated academic argument, all while code-meshing. The professor agreed that it would be appropriate if the student wrote in BVE “given the nature of this particular assignment on identity.” This professor took a step toward combating linguistic prejudice, but what else can we as faculty members do?

It is not enough to create room for dialectical diversity in the classroom; we must also combat linguistic prejudice by revealing it. You can do a range of things, including showing short videos, such as these TED Talks by Jamila Lyiscott and Karen Leung. You can assign “Respect AAVE” by Nicole Cardoza. You can organize a screening of Talking Black in America or invite a multilingual/multidialectal panel of students, faculty and staff to share their experiences.

The 1974 Conference on College Composition and Communication statement on Students’ Right to Their Own Language acknowledged that “rejecting one’s native dialect is to some extent a rejection of one’s culture.” It is time that we take concrete steps to create a learning environment that values diverse languages and dialects. In taking those steps, we teach our students to listen more actively and communicate in a world where people speak and write in so many different Englishes. And we begin to dismantle the white supremacy that our academic institutions too often perpetuate. 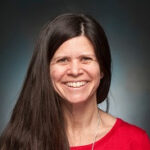 Catherine Savini is an English professor and directs the Reading and Writing Center and Writing Across the Curriculum Program at Westfield State University in Massachusetts. This essay appeared first in Inside Higher Ed (January 27, 2021).