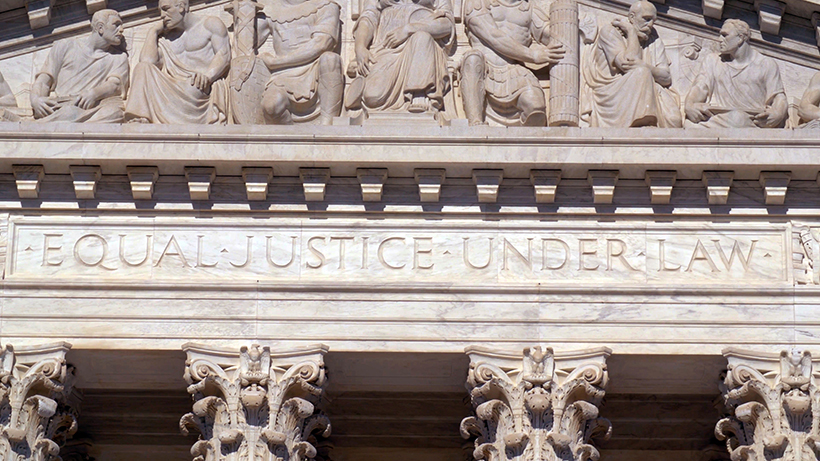 In contemplating a nomination to the US Supreme Court in 2009, President Obama noted that he sought a nominee who understood that “justice isn’t about some abstract legal theory or footnote in a casebook; it is also about how our laws affect the daily realities of people’s lives, whether they can make a living and care for their families, whether they feel safe in their homes and welcome in their own nation.”

Literature and law have a noted relationship in scholarship. Using narrative to understand the law is a foundational principle of critical race theory, which has its origin in the legal academic work of Derrick Bell and Richard Delgado. So pairing common English language arts curricula with legal studies is not entirely new.

For instance, legal scholar Kenji Yoshino’s A Thousand Times More Fair: What Shakespeare’s Plays Teach Us about Justice underscores how the Bard’s work can illuminate ideologies in the justice system. In Educating for Empathy: Literacy Learning and Civic Engagement, education scholar Nicole Mirra calls literature a “civic text.” This relationship between law and literature can be nourished in secondary English language arts classes as well by pairing Supreme Court cases with young adult literature.

Developing lessons that allow young adult literature to elucidate the way abstract legal decisions concretize in people’s lives may require some preparation. For example, students need to have a working understanding of the Supreme Court, such as how a case gets to the court, who the justices are, and what power the court has over the legal system. Therefore, teaching Supreme Court cases using young adult literature has potential for powerful cross-curricular lessons with social studies and government teachers.

There are hundreds of cases throughout the history of the Supreme Court, so considering which cases will be fruitful is an important first step. Fortunately, civil rights attorney and education policy analyst Robert Kim offers a path. Kim’s book Elevating Equity and Justice: Ten U.S. Supreme Court Cases Every Teacher Should Know is an excellent text for helping teachers understand the history, complexities, and impact major Supreme Court cases have had on K–12 public schools. Cases from the book can make excellent pairings with young adult titles. For instance, Tinker v. Des Moines Independent Community School District (1969), which ruled in favor of students’ right to protest, can be paired with Watch Us Rise by Renée Watson and Ellen Hagan to address how legal cases established students’ right to freedom of speech, to a degree. Teachers could also use Miles Morales: Spider-Man by Jason Reynolds to teach about the Supreme Court’s ruling in Goss v. Lopez (1975) that granted students due process in disciplinary procedures. These are just two of the ten cases Kim analyzes in his book.

The cases outlined in Kim’s book are a good starting point. However, the list is not exhaustive for young adult literature pairings. For instance, teachers could pair last year’s Bostock v. Clayton County decision, which extended employment protections to LGBTQ+ workers, with Shannon Hitchcock’s One True Way, to underscore how legal decisions shape LGBTQ+ teachers’ and LGBTQ+ students’ schooling experiences.

Similarly, teachers could pair last year’s Department of Homeland Security v. Regents of the University of California, which blocked the Trump administration’s attempt to end the DACA program, with Kelly Loy Gilbert’s Picture Us in the Light to address the real impact legal decisions have on undocumented Americans.

It’s important to highlight the disparities between who determines the constitutionality of laws and who has to live under those decisions. The Supreme Court, like all federal institutions in the United States (including English language arts curricula), remains overwhelmingly white and male. Of the 115 Supreme Court justices, two  have been Black men, one has been a Latina, and four have been white women. No Supreme Court justice has been an open member of the LGBTQ+ community. President Biden has promised to nominate a Black woman to the Supreme Court should he be gifted a vacancy.

President Obama made progress in racially diversifying the federal courts (specifically the lower courts), but that progress was eroded by President Trump, who nominated nearly all white men. What remains is a legal landscape in which the people who determine the constitutionality of the laws look very little like the people who must live in the constructed legal landscape. Young adult literature written by authors of color and LGBTQ+ authors, when paired with Supreme Court cases, can illuminate those tensions and inequities.

When discussing the Supreme Court, it’s vital that students understand that the court is not an apolitical entity. Rather, Supreme Court justices, like all political actors (including teachers), are individuals with their own ideologies, worldviews, and interests. There is nothing neutral or sacred about Supreme Court decisions; they are the products of politics, much like their legislative and executive counterparts. Teachers should stress that teaching the outcome of a decision does not constitute an endorsement of the decision.

To use a case from Kim’s book, I find the decision in San Antonio Independent School District v. Rodriguez (1973), in which the court found no constitutional right to education, to be detrimental to the democratic aims of schools. In that vein, students should understand that morality and legality are not synonyms. What is legal is not what is always moral. Rather, those with power decide what is legal.

I spent a lot of time in 2020 listening to the excellent Supreme Court podcast 5-4. Each episode dissects how a case impacts people in their lives beyond the abstract legal reasoning.

Given the increasing power of the Supreme Court in American politics, it’s important for students to understand how the judicial branch shapes and constructs our civic lives. Supreme Court Justice Elena Kagan is credited with having taught President Obama that “behind law there are stories—stories of people’s lives as shaped by the law, stories of people’s lives as might be changed by the law.” Young adult literature has the potential to play the same teaching role in our English classrooms.