Strength - NCTE
Back to Blog 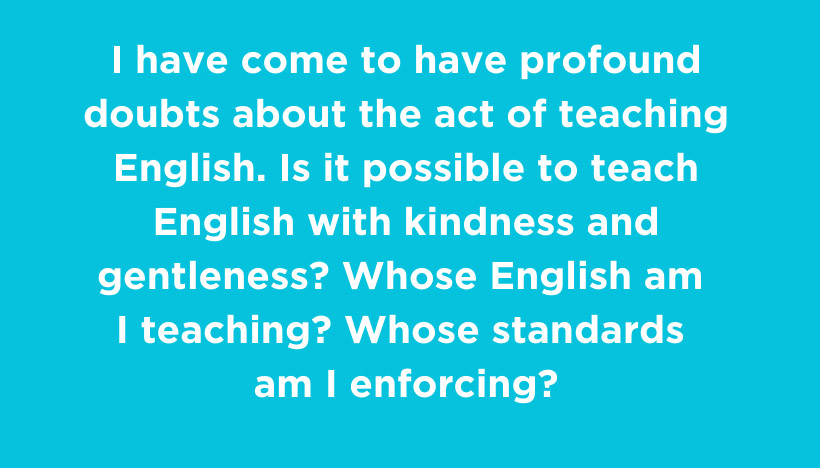 “It takes strength to be gentle and kind.”

—Morrissey (the Smiths “I Know It’s Over,” from The Queen Is Dead)

As a committee member, a queer man, a longtime English teacher, and a white resident of north Minneapolis, I am wondering about strength. How will I find the strength to again enter the classroom to teach composition?

After more than thirty years of teaching, after over a year of a global pandemic with its attendant isolation and emergency online teaching and deeply inequitable devastation, after the horror of George Floyd’s murder, after the violence and rage that erupted across my city, after the vicious insurrection in the capitol, after the lengthy trial of Derek Chauvin with its excruciating videos and testimony, after the senseless shooting of Daunte Wright only miles from my home—after all of this, I fear I might not have the strength to stand again in front of the students of Minneapolis College and act as if I have anything to teach them.

When I was growing up in rural Wisconsin in the 1980s, I was the only person I knew to be queer. And in that isolated state, I looked to Morrissey’s witty, vulnerable lyrics to understand not only that I was not alone, but that I might find ways to thrive . . . and to be strong. And the strength that Morrissey challenged me to embody was a particularly queer strength: a strength that was “gentle and kind.”

I have been trying to live up to that challenge for most of my teaching career.

But I have come to have profound doubts about the act of teaching English. Is it possible to teach English with kindness and gentleness? Whose English am I teaching? Whose standards am I enforcing? Who is the beneficiary of my teaching academic composition? What is the impact on my students—most of whom come from marginalized groups—of my perpetuating on them (and in their minds) the language and structures of the system that might have already traumatized them? How can I promote system change, when the purpose of my teaching is to inculcate students into the system that has been judging, harming and marginalizing them all along?

The position statement of the CCCC, “This Ain’t Another Statement! This is a DEMAND for Black Linguistic Justice,” captures in stark and clear language the harmful nature of the ways that English has historically been taught.

I teach English in an institution that is designed around structures not intended to promote learning but rather its own perpetuation: the 16-week semester, the three-credit class, the letter grade—what does any of this have to do with learning?

More importantly, how does trying to force a student’s learning experience into these structures risk damaging the student? The assigning of grades, in particular—the fitting of students into a preordained hierarchy—seems a sexist, racist, and classist act, an act of violation.

The community college owes its existence, in part, to the desire to open up academia—to provide access to the supposed benefits of higher learning to members of those groups who had historically been excluded from it. But did the creation of the many community colleges across the country do anything to alter the nature of the institution that was supposedly being opened?

My charge, as an English instructor at a community college, is to provide students from marginalized groups the opportunity to demonstrate their mastery of the standards that academia requires. Yet those very standards are intended as the mechanism that will be used to make determinations around who is included and who is excluded. So . . . my job is to include those the system intends to exclude?

After thirty years of teaching, I have come to wonder if my real job hasn’t been, all along, simply to provide an excuse to the oligarchy of the hyper-wealthy and to perpetuate the cruelty of blaming poverty on the poor:  The existence of the community college allows the system to claim that it has provided the poor and the marginalized the opportunity to succeed, so that when they “fail” (as many often do), their failure can be blamed on them:  “We gave you the chance; you failed!”

I have become acutely aware of the demands of my students’ lives:  their children; their multiple jobs; their precarious housing situations; their mental health challenges (often related to the traumas of poverty, racism, sexism, violence, transphobia, mass incarceration, sexual assault, etc.); their transportation challenges; their health concerns . . . The list of the obstacles and barriers to their learning is long.

When these demands prevent, for some students, the demonstration of the mastery of learning outcomes, my job is to grade them accordingly: We wouldn’t want an unprepared student moving to the next level, would we? I have come to wonder how those of my students who face multiple challenges might fare in academia if they had access to the conditions of those for whom academia was designed: comfortable housing, adequate nutrition, access to child care and health care, effective transportation, time to think and focus solely on academic work, social support, and so on.

Over my thirty years of teaching, I have come to understand that I have been the one in need of an education. I needed to be educated on how education has been used—globally—as a means not of growth and improvement but as a tool for exclusion and oppression. My students, often, have been those who have had to educate me—and for their trouble, they got a grade; I got a paycheck.

I want to find the strength to face these students again. But I can no longer look to Morrissey. Like so many of the things I used to believe in, Morrissey, too, has let me down. (Here’s an article that lists some of the things he’s said.)

So I have looked elsewhere to learn ways of finding the strength I need to be gentle and kind. Brené Brown’s work on vulnerability has been beneficial. And I have found inspiration from another queer voice: Tennessee Williams. During the course of the pandemic and the unrest, I have returned again and again to his poem, “Your Blinded Hand,” for it captures both the pain and the strength of the past year. I have come to understand that mine is indeed a “blinded hand,” and that “in a city of fire when the earth is afire,” the greatest source of strength might be my finding and grasping another “blinded hand” . . . perhaps that of a student.

For over 30 years Michael Seward has been teaching a variety of subjects at various levels, from eighth grade to post-graduate. He has been involved in global education in a number of capacities (including two Fulbright teaching exchanges) and countries (including England, Germany, Slovakia, Costa Rica and Poland). Currently he teaches English and serves as an assessment coordinator at Minneapolis College.