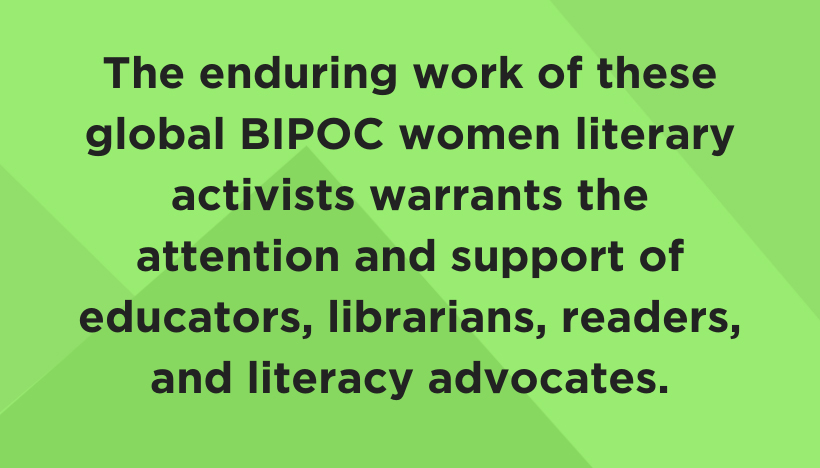 This post was written by NCTE member Sonia Adams.

Early in my academic studies, I became interested in reading literature by American women writers of color. As time passed, my interest in women’s writings progressed toward a globalized and activist paradigm.

The late writer and activist Toni Cade Bambara wrote that the job of the writer is to make revolution irresistible. Engaging in “revolutionary” struggle lies at the foundation of literary activism. I greatly admire activist women writers who use their craft to explore the complexities and dynamics of human experience in unique and thought-provoking ways. I also respect women activist educators who engage in community-based education through critical literacy, multiculturalism, social justice, and personal empowerment.

I would like to highlight three global BIPOC women literary activists who not only transcend borders and boundaries, but who cultivate an enriched reading culture that provokes critical change in the world.

Dr. Anita Heiss is an accomplished Aboriginal literary scholar, educator, author and activist.  She is a member of the Wiradjuri nation, located in the state of Central New South Wales in Australia. Dr. Heiss’s publications include a series of articles, adult novels, elementary and middle-grade books, and a memoir. In addition, she has edited the following groundbreaking anthologies: Macquarie PEN Anthology of Aboriginal Literature, Growing Up Aboriginal in Australia: Childhood Stories of Family, Country And Belonging, and The Intervention: An Anthology.

I had the pleasure of meeting Dr. Heiss for the first time when she launched her novel Manhattan Dreaming and delivered a presentation on Aboriginal literature at the Australian Consulate in New York City several years ago. Her passion for the written word ranges from her creative writing projects with students at La Perouse Public Schools to her ambassadorship for the Indigenous Literacy Foundation (ILF) and Worawa Aboriginal College.

At the ILF, Dr. Heiss has been instrumental in addressing low literacy rates among children in remote Indigenous communities by participating in fundraising campaigns and community publishing projects. Her central goals in pursuing this work are to instill a love for reading in Aboriginal and Torres Strait Islander children and to provide them with culturally relevant and life-affirming books in which they can see their identities and communities reflected. Dr. Heiss has cofacilitated writing workshops with Shelley Ware at Worawa Aboriginal College, and the Worawa students produced writings, photographs, and artworks that were published in Deadly Sisters of Worawa. Dr. Heiss’s commitment to empowering students through literacy education resonates with me strongly. In following Dr. Heiss’s literary activist pursuits over the years, I’ve come to consider her as a mentor from afar.

Chicana literary activist Denise Chávez continues to make an indelible mark in American letters and in her community of Las Cruces, New Mexico. She has produced several works of fiction and plays as well as the memoir A Taco Testimony: Meditations on Family, Food and Culture. In addition to Chávez’s  published writings, she has taught creative writing at leading colleges and universities and facilitated writing workshops at the Port Townsend Writers’ Conference, Casa Camino Real, and other sites. She currently serves as the owner and director of Casa Camino Real Bookstore & Art Gallery.

In reading A Taco Testimony many years ago, I was enamored of the way Chávez merged Mexican recipes, memoir, ancestral history, and cultural aesthetics to render familial stories, authentic in voice, nuanced in memory, palpable in lived experiences. Activist writers like Chávez who display such attributes through their craft are intentional in addressing issues of diversity, representation, and inclusion that are often dismissed by the elitist publishing industry in the US. As founder and codirector of the Borders Book Festival, Chávez asserted an activist stance in transforming sociopolitical and cultural borders that were set in place to thwart community building and engagement. In an interview with Border Lore, Chávez shares the community ethos she and former executive director Susan Tweit asserted in sustaining the festival: “We were bringing writers to people and people to writers in an underserved, multicultural community that was lacking that kind of engagement.”

Chávez’s community ethos evolved into new ventures. She established Libros para el Viaje, Books for the Journey, which is a book drive for funding and distributing books to migrants and refugees at temporary shelters, churches, and nonprofit organizations. Chávez’s involvement in the book drive has segued into volunteer service for the Border Servant Corps, delivering books to migrant and refugee groups in Las Cruces. Her contributions in creating literate communities continue to inform her life and activism. As Chávez affirms: “I was a writer and community activist. The Border Book Festival was my coming into womanhood and coming into full force as an activist” (Border Lore).

Kit de Waal is a British-born author of Irish and Caribbean ancestry. Early in de Waal’s professional career, she worked as a legal executive and magistrate under the sectors of criminal and family law. Several years later, de Waal decided to pursue a writing career. She became a member of the Oxford Narrative Group and Leather Lane Writers and has since published articles, essays, a short story collection, and three novels. I was instantly drawn to her novel My Name is Leon upon its US release. I was intrigued by the way de Waal captured nine-year-old Leon’s vulnerability and courage in being separated from his mother and placed in the foster care system and bearing witness to the 1981 race riots in England.

Growing up as a poor biracial child in an Irish working-class community inspired de Waal to launch the Kit de Waal Creative Writing Scholarship, which affords aspiring writers from marginalized backgrounds monetary and support services. Of special note is the fact that de Waal financed the scholarship by reserving money from an advance she received for her most well-known novel.

The lack of or limited publishing opportunities available for emergent writers from marginalized groups provoked de Waal to form a partnership with Unbound in crowdfunding and publishing the anthology Common People: An Anthology of Working-Class Writers. In de Waal’s article, she negates stereotypes of working-class folks by centering their voices and experiences in the anthology: “these are narratives rich in barbed humour, their technique and vernacular reflecting the depth and texture of working-class life, the joy and sorrow, the solidarity and the differences, the everyday wisdom and poetry of the woman at the bus stop, the waiter, the hairdresser” (13). Overall, I admire de Waal’s “Black feminist ethic of caring” as a literary activist writer.

The enduring work of these global BIPOC women literary activists warrants the attention and support of educators, librarians, readers, and literacy advocates. Dr. Anita Heiss, Denise Chavez, and Kit de Waal remain vigilant in cultivating a rich body of literature to gift to the world.

In case you’d like to learn more, additional resources are suggested below.

“’I know what you are about to enter’: Lived Experiences as the Curricular Foundation for Teaching Citizenship,” Black Women Theorizing Curriculum Studies in Colour and Curves, edited by Kirsten T. Edwards Williams, Denise Taliaferro Baszile, and Nichole A. Guillory, Routledge, 2020, pp. 19–35.

Learn More about These Literary Activists

“Want to write the great Australian novel? You need to engage with Indigenous Australia first” (April 2021)

Video of the 2017 Ngunnawal Lecture “Collaborating with Children to Improve Literacy” delivered by Dr. Heiss (Oct. 13, 2017)

Video Presentation for the anthology Growing Up Aboriginal in Australia, edited by Dr. Heiss 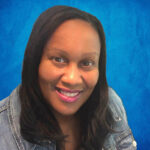 Sonia Adams is an English educator and PhD candidate from New York City. Her scholarship is centered on multicultural feminist studies, contemporary US multiethnic and global women’s literatures, and social justice interventions in English studies instructional design and curricular development.