Get Ready for National Dictionary Day! - National Council of Teachers of English
Back to Blog 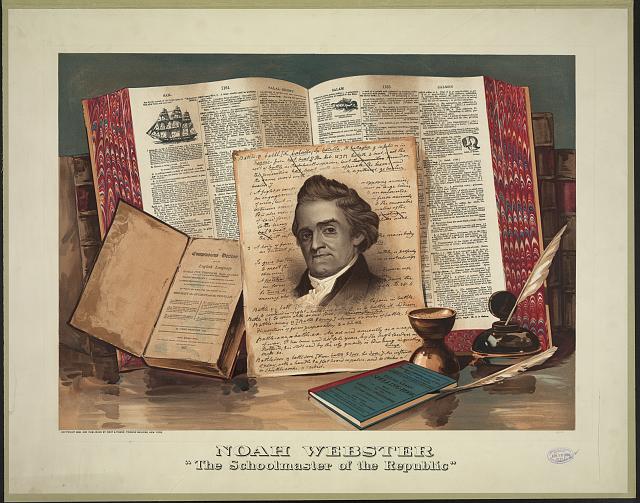 National Dictionary Day is observed annually on October 16th, to celebrate the birthday of the father of the American dictionary, Noah Webster. Noah Webster was born on October 16, 1758, in Connecticut.

Believing that American students should not have to use British textbooks, he wrote A Grammatical Institute of English Language, which became the main source for spelling and grammar in the United States. He then began work on the first American dictionary, An American Dictionary of the English Language, which contained nearly 70,000 words by the time it was completed in 1828. He began his work on the project at the age of 43 and it took him more than 25 years to complete the first edition. Each month, the award-winning websites, apps, and social media channels of Merriam-Webster offer guidance to tens of millions of visitors. See pages of the early dictionary here from the Library of Congress.

Use the following resources from NCTE and ReadWriteThink.org to recognize National Dictionary Day.

In this post, NCTE members Johnathon D’Alessandro and Anne Curzan share why “Dictionaries Deserve More in the Secondary School Classroom.”

Ellen Shubich writes, “Language changes, as do the ‘rules’ related to its usage.” Language has always undergone change. Authors from Dickens to Dr. Seuss invented new words we use every day. New words are continually added to the dictionary. James Joyce changed the language by avoiding punctuation, and rap changed the rhythm of language.

In this lesson plan, students become novice lexicographers as they explore recent new entries to the Oxford English Dictionary (OED), learn the process of writing entries for the OED, and write a new entry themselves. Students will gain a deeper appreciation for the ways language grows and changes by following up their entry with a persuasive essay and a competition in which the strongest contender for the title of New Word is chosen.

Validate students’ out-of-school language use by asking them to share details on the use of words and phrases from movies, television shows, books, and other texts. In this activity, students compose dictionary entries for words and phrases from pop culture texts, connecting the definitions to their personal use of the terms. Their work is published individually, or if desired, collectively in a class dictionary.

Learn even more about Noah Webster and his role in copyright laws from the Library of Congress.

National Dictionary Day celebrates language, emphasizes the importance of learning, and encourages readers to use the dictionary to improve vocabulary.