Why Study Groups? - National Council of Teachers of English
Back to Blog 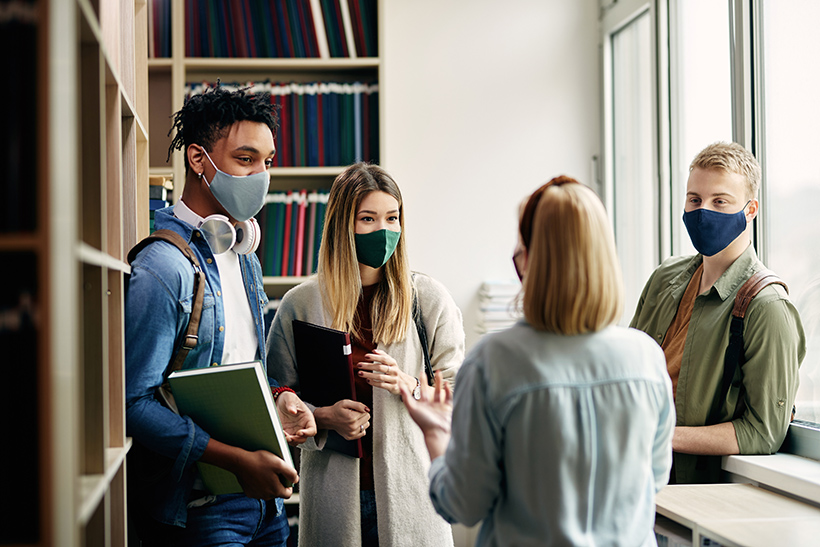 This post was written by NCTE member Linda Larson.

“These study groups aren’t helping. I feel lonelier than ever,” said one student, two weeks into the semester. I wondered if I had made the right decision.

The pandemic has affected teaching in many ways. Currently, instructors are seeing students struggling with mental health. An April 2022 Chronicle of Higher Education article,  “A ‘Stunning’ Level of Student Disconnection,” shared by our department cochair, reinforces what we as instructors have observed: students are lonely and anxious, withdrawn, and unmotivated.

In a class of 28, it’s difficult for an instructor to check in daily with each student. I love theory as much as the next person, but I want to put ideas into practice, drawing students out of their dorm rooms and into an engaging experience. While this is not a new idea, study groups appealed to me as a solution.

During planning, a few students let me know that my class was the only face-to-face class they had. I had to take into consideration that students are often over-scheduled with large class loads so they can graduate in four years, and most work one if not two jobs.

My introductory composition class met four days a week for 50 minutes. I created required study groups for each Monday’s class (excluding holidays). I told the class that I should call these support groups, and I wasn’t joking. The intention behind these study groups was to support collective mental health. Students could choose to meet online if someone was ill or tested positive for COVID.

While we needed the online option, it wasn’t ideal. One student told me she felt as if she were the only one talking on the Zoom call, so I pushed for the face-to-face option. As the semester progressed and COVID numbers went down (and the bitter Minnesota winter got warmer), most groups met in person.

To set up the groups, I used getting-to-know-you activities the first days of class. I formed groups based on which students were sitting next to each other. Students didn’t know anyone else in the class, except for three students who had attended the same high school.

When groups were chosen, I asked for a volunteer organizer. I didn’t want the organizer to become a teaching assistant, so I didn’t require them to take attendance. They could create a Zoom link if needed. In later surveys, students felt they didn’t need a formal organizer because they could discuss the situation via social media. When I assigned groups, the students exchanged e-mail addresses immediately, and most chose social media apps to communicate. I didn’t push beyond e-mail because I want students to be able to maintain their privacy online if they choose. I discouraged sharing phone numbers until they got to know each other better. Due to students dropping the class, I intervened once to distribute students more evenly with seven groups in a class of 23.

The required group activities gradually became more difficult and worth more points as the semester progressed. Easy and fun activities were a good chance for the students to have time to talk to each other. The grading on the assignments was informal, giving full credit for thoughtful and complete work.

The activities were based on what students would have done in class, which required less planning for me. Each student uploaded their individual assignments on D2L, our learning management system. To get around the taking of attendance, I required them to work with their group members. For example, when they were revising thesis statements for an essay, they wrote their own and their group members’ new thesis statements in the same document. While it’s possible that some students bypassed the meeting time to send each other answers, most students respected the study group and met each week. It may have helped that I threatened we would return to regular class time if they didn’t meet in groups. 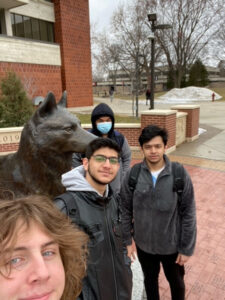 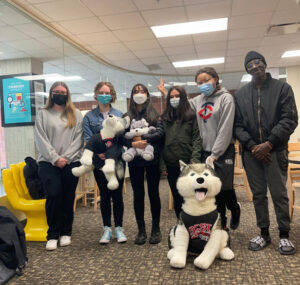 The most highly rated activity was for bonus points, a group photo with our school’s mascot, a Huskie. I’ve attached two photos with students’ permission.

I checked in with students four times: in a class discussion after two meetings, with an online survey after five weeks, with an in-person note to me during around mid-term, and via an anonymous survey at the end. The handwritten note was to see if the students wanted to switch groups; only two people expressed interest in switching. The final online evaluation inspires me to try this again.

If I use study groups again, I will be more intentional in the choosing of groups. I may do on online survey with interests. One group seemed to have some tension along political lines. I don’t want to ask students for their political views fearing I may become biased when grading. My class is not about politics, yet the readings emphasize human rights and social justice topics, such as Afghan girls not being allowed to go to school. It’s possible that this group’s experience reflects the political divide in America.

In the future, I will not ask for an organizer because this happens naturally as students get to know one another.

Another student had erratic attendance at the beginning of the semester. I encouraged him to come to class, enlisting one of his group members to help, and he did attend regularly for the rest of the semester.

At the end of the semester, in an anonymous survey one response was “PLEASE CONTINUE TO DO STUDY GROUPS IN THE FUTURE!!” Yes, it was all caps. And, yes, I suspect it was the student who expressed loneliness.

The semester began with 28 students, and five dropped the class. Of the 23 remaining, 21 completed the end of semester survey. I asked, “Should I use study groups again in a future class?” and all the students chose “yes.” Nineteen students said they made a friend. Seventeen felt the groups helped their mental health in a general way. Nine felt less lonely, and fourteen felt less stress. Thirteen students chose this response: “I feel like I supported someone (academically or emotionally) in my study group.” This shows that not only are students learning the course content but also social skills which may have been missed due to online learning.

In the survey, fourteen students said that the groups helped them do better on the major essay assignments. While students’ earned grades were similar to pre-pandemic grades, students participated well in group discussions. The last group assignment was evaluative writing about the study groups, and many said they would create their own groups in future classes.

Giving students the practice of working in a group in a low-pressure environment helped their mental health during the semester, and it may help students create their own study groups—support groups—in future classes. 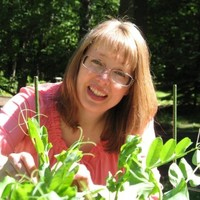 Linda Larson teaches English, mainly composition, as an adjunct at St. Cloud State University. She writes an opinion column for the St. Cloud Times and is the author of A Year in My Garden and the award-winning Grow It. Eat It.