From Rockstar Pursuits to Roadie Boots: What CEL Has Taught Me about Leadership - National Council of Teachers of English
Back to Blog 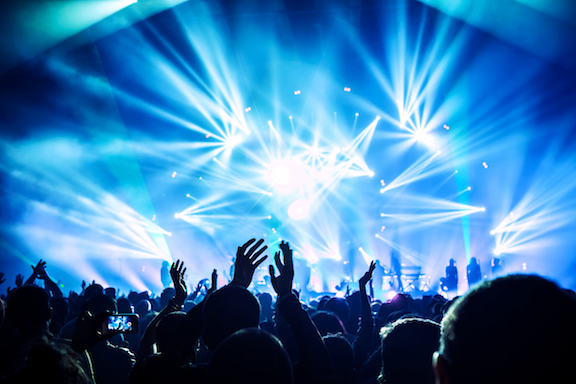 This post by NCTE member Oona Marie Abrams has been reprinted from the blog of the NCTE Conference on English Leadership.

There’s a photograph of me as a toddler in which I am seated, just barely, on a dining room chair, flanked by my sisters who are eight years and three years my senior. They’re doing their best to keep me in that chair so that whoever is behind that camera can take our picture. I’ve never been one to sit still, to be held down or held back. But being the third born in my family made me far more likely to compete for attention and to seek praise. When I became a teacher in 1996, I found that the profession helped very much to meet my need for attention. Standing at the front of the classroom didn’t always guarantee that I’d be listened to 100%  (or 50%, or 20%) of the time, but the likelihood was good that I’d get noticed eventually.

The author (middle) with her sisters.

For many years, I liked the attention that teaching afforded me. I brought in my guitar and sang “The Preposition Song” to my students (a listing of every preposition, written to the tune of Adam Sandler’s “Hanukkah Song”). I was the young, energetic, positive teacher who wanted to take on the world. Things were good. Until they really weren’t anymore.

I nostalgically call this crossroads of my teaching career the Seven Year Itch. I got bored. Really bored. Bored of saying the same things to multiple sections of a class. Bored of the same lesson plans. Bored of being the one doing the talking. That’s when I realized that my students were kind of bored, too. I hadn’t realized this, the difference between polite compliance and authentic engagement.

This is also when I realized that I could end up being a teacher who said “I like change every once in a while.” (translation: “I teach one new book every five years.”) I could be the teacher who essentially taught the same year for the next 40 (which would mean having one year of experience, not 40).

So I did something that most of my tenured colleagues considered crazy. I scratched the itch by getting a new job. I went to work for Edie Weinthal, a CEL member  who promised me I’d never get bored on her watch, and she stayed true to that promise. Under Edie’s leadership, I became a more reflective teacher. She encouraged me not only to attend the NCTE and CEL conventions, but also to present at other professional conferences, and to publish articles in educational journals here in my home state of New Jersey. For the eight years I worked for Edie, I always felt challenged to be my best teacher leader.

When a career opportunity for my husband relocated our family to North Carolina, I moved to a new school in a rural suburban district, and it was like moving to another country. I was part of an interdisciplinary team of teachers who wrote new curriculum and delivered it, and that was exciting. But all of the sudden, I didn’t have a department anymore. There was no department chair, no English office, no supervisor for my subject area. And not much of the freedom and professional trust to which I had grown accustomed over my career.

My copies were limited to 2,000 per semester. Students didn’t have school e-mail addresses or regular access to technology.  My selection of the novel The Catcher in the Rye, a book I had taught for 15 years in New Jersey, a book that I had studied in high school, and a book my parents had also studied in high school five decades ago, was challenged. I was on my own, and that loneliness made me want to take a break from the classroom.

If not for my NCTE and CEL memberships, if not for the reminder that I was part of a community larger than the one in which I was teaching, I might have left the profession. I came awfully close.

Fortunately, following maternity leave after my youngest son was born, my family moved back to New Jersey in 2013, and I’ve had the good fortune since then of working for Heather Rocco, CEL’s current chair.

It was regular face-to-face lesson plan meetings with Heather that helped me to set a clearer course for myself. I knew there was much I was doing right in my classroom, but I couldn’t figure out why other things were going wrong.  This is when two professional books by CEL members found their way into my hands: Notice and Note by Kylene Beers and Bob Probst, and Book Love by Penny Kittle. These were the books that would finally help me find the root cause of my restlessness, and the great irony of it: the very things that made me feel restless were what made my students that way: a lack of choice and a lack of freedom to pursue my own voice. Since 2013, I’ve read many more professional books that inform my instructional choices, but these two truly set me free. In these past five years, I have:

But something far more impactful has happened in these past five years. Miraculous, really. I have shut up! (Okay, let’s not get too crazy. I still talk. A lot. To everyone who will listen. But…) During class time, I’ve grown accustomed to working the room and listening in on conversations, taking notes, and conferring with students in small groups.

And I won’t be. I don’t want to be a rockstar anymore. (So you can shove it, shame gremlins.)

Rock stars burn out. They chase attention and fame, and when they discover these aren’t enough, history tells us what happens next.

If you become a teacher to be a rockstar, you’re bound to face disappointment, as I did. I came into this profession mistakenly seeking attention, but what I’ve discovered over time was that giving my attention to my students is far more fruitful an endeavor. I want to be like lots of edu-celebrities out there, but they are not their books. Behind most “edu-rockstars,” the good ones anyway, there’s actually a roadie.

Roadies are tough. They get things done. They work together. They get their hands dirty. They put up with divas and egomaniacs. They think of the little things. They plan for what might go wrong. They’re loyal and patient. And when it’s showtime, they’re invisible. But it’s all of their work that makes everything possible. I once aspired to be the rockstar of my classroom, of my department, of my school. Now I know the greatest pleasures and privileges of this profession are in being the roadie.

Editing English Leadership Quarterly for the past four years has been one of those roadie privileges. Behind the scenes, I’ve gotten to know so many amazing educators, authors, and the dedicated staff at NCTE. Whenever I experienced a problem in my instruction, I found a way to spin it into an issue of ELQ. Looking back on issues like “Getting Into Arguments,” “Digital Dilemmas and Delights,” and “Tasking Time and Taking Time,” I can see how my own growth in the classroom correlates to all I learned from my work with authors.

As the editorship draws to a close, I know there are a few places where my roadie boots will dig into the ground. Strengthening connections with regional members of NCTE and assisting the New Jersey lead ambassadors is one goal. Collaborating with NCTE and ALAN member Sarah Mulhern Gross and fellow CEL members Emily Meixner and Christina McCabe on NerdCampNJ has been, and will continue to be, one of my most cherished roadie experiences.

And to those reading this who might be experiencing that Seven-Year Itch, I extend this very “Jersey” invitation for you to join CEL, invoking the sage words of Jon Bon Jovi: “Take my hand, we’ll make it, I swear.” Let’s be roadies together on this ever-changing tour as literacy leaders!

Oona Abrams (@oonziela) teaches eleventh and twelfth grade English classes at Chatham High School in northern New Jersey. She has served as editor of English Leadership Quarterly since August of 2014. The April 2018 edition, which she co-edits with Elaine Simos, will be her final issue.