A Marvel of an Avenger - NCTE
Back to Blog 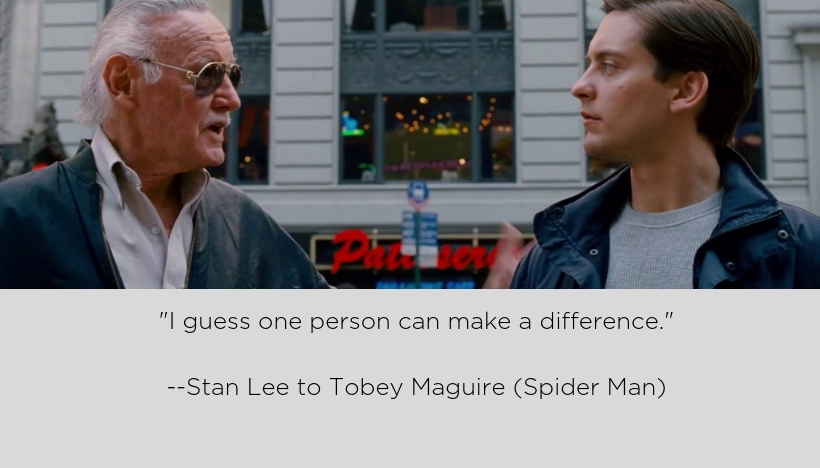 While it’s been a few weeks since Marvel Comics marvel Stan Lee died, now in the season of reflection is a good time to remember what he and his comic book characters have given us in popular culture, potentially in our classrooms, and as defenders of intellectual freedom.

In a cameo appearance in the first Spider-Man movie, Stan Lee and Spider Man are gazing at the electronic news banner on a building in New York City’s Times Square. The banner proclaims that Spider Man will be awarded the key to the city for saving a police officer’s daughter. Lee turns and says to Spider Man, “I guess one person can make a difference!” Such a true message—one we find in most of the literature we teach, one we encourage our students to take to heart, and one that describes Stan Lee.

In 1954 the comics industry, which had been subject to criticism for its too-real stories and depictions of life (including a Congressional hearing on how comic books were corrupting American youth), developed what amounted to a censorship code, a set of regulations that dictated what topics could and couldn’t be treated in comic books.

“Lee revolutionized the comics business in the ‘60s by creating superheroes who lived in a real world of personal challenges, social strife and petty annoyances. The Fantastic Four, Incredible Hulk, Avengers, and X-Men were dynamic characters in tales that were part soap opera, part Saturday movie serial.”

—from “Breaking the code: Stan Lee’s Stand Against Censorship”

But in 1971, the Comics Code rejected a three-issue series “The Amazing Spider-Man” which depicted a character with a serious drug problem intended to dissuade young people from using drugs. Lee and Marvel comics took a stand against censorship and the ridiculous code by publishing the issues anyway.

Indeed, the rejection of the anti-drug storyline simply highlighted the absurdity of the Code, which was revised again that same year to clarify that drug addiction could be mentioned as long as it was portrayed “as a vicious habit.” —“Breaking The Code: Stan Lee’s Stand Against Censorship”

As Peter and Paul Reynolds in their Sunday keynote at the NCTE Annual Convention challenged teachers to “create bravely” and celebrated the fact that as teachers “there are countless moments where you’re changing students’ lives,” Stan Lee used his comics to do the same for comic book readers. He challenged the genre and gave us characters, stories, and themes that have formed the basis of modern day pop culture, especially the fight for good and against evil. Lee and Marvel Comics stood up to protect his right to publish these stories.

As the characters in Avengers Infinity War tell us, “There was an idea to bring together a group of remarkable people to see if we could become something more so that when they needed us we could fight the battles that they never could.”

Check out the following resources for more information about comics, how you might use them in your classroom, and challenges to them:

Comics and Cartoons in the Classroom

Manga and the Autistic Mind