Forwarding Literacy in I Am Malala - NCTE
Back to Blog 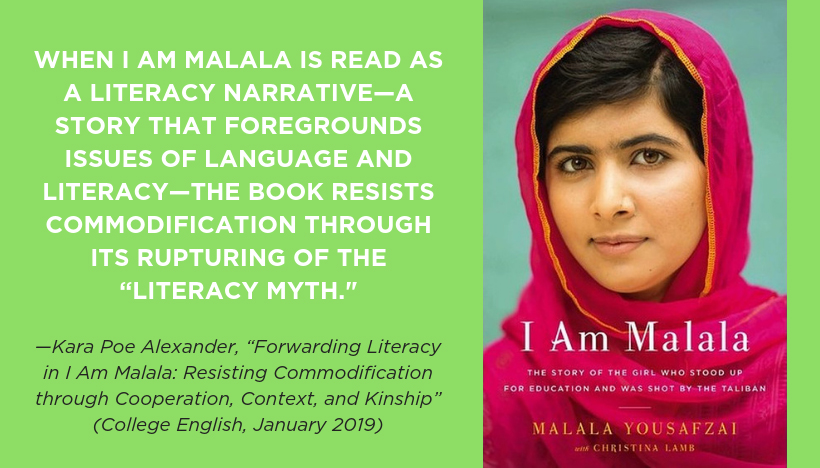 This post is excerpted from Kara Poe Alexander’s article “Forwarding Literacy in I Am Malala: Resisting Commodification through Cooperation, Context, and Kinship” (College English, January 2019)

In 2013, one year after being shot, Malala Yousafzai published a memoir, I Am Malala: The Girl Who Stood Up for Education and Was Shot by the Taliban. Cowritten with journalist Christina Lamb, the book tells the story of Yousafzai’s life and education growing up in Pakistan before, during, and after 9/11.

Written primarily for a Western audience, the book has been read by critics as an “unabashedly doting” account (Ryder 175) of how one girl and her campaign for education could overcome Taliban cruelty, end the War on Terror, and promote Western ideals (Hesford; Rahman; Thomas and Shukul).1 Fauzia Rahman summarizes, “Malala and her campaign for girls’ education were framed as the greatest and most effective weapon against the Taliban, and a potential turning point in the ‘war on terror’” (154).

In contrast to the Pakistani media that was mostly critical of Yousafzai, the Western media has idolized her—framing her as an education hero, a subject of violence caused by terrorism and the Taliban, and a victim of a society hostile toward women (Bennett; Khoja-Moolji; Thomas and Shukul). Yousafzai has been depicted as “‘empowered,’ ‘enlightened,’ and, most importantly, connected” (Rahman 162).

The New York Times repeatedly addressed Malala as “the girl shot by the Taliban,” and other magazines and newspapers characterized her as “the girl saved from her ‘savage people’” (Thomas and Shukul 234).2 As the face of anti-Talibanism and girls’ rights and education, Yousafzai was portrayed as a martyr for the cause, even being likened to Joan of Arc for her “undiminished bravery and defiance of the Taliban” (Bennett).

The problem with these representations is that they commodify Malala, using her as a tool for particular arguments to mobilize populations and agendas rather than seeing her in her own right and personhood.

Women’s studies scholar Emily Bent argues that these depictions reinforce a colonial power structure through the dangerous image it constructs of “Third World vulnerability” (qtd. in Thomas and Shukul 236). Not only do these interpretations conveniently bypass the indictments Yousafzai makes in her book of the American government, drone strikes, war, civilian deaths, and poverty—which alone cast doubt on claims that she promotes Eurocentric ideals and agendas—they also fail to account for the ways Yousafzai incorporates and performs literacy in her book, a fact that upsets commodification claims.3

In fact, when I Am Malala is read as a literacy narrative—a story that foregrounds issues of language and literacy (Eldred and Mortensen; Scott; Soliday)—the book resists commodification through its rupturing of the “literacy myth.” The literacy myth is the idea that better literacy necessarily and automatically leads to success and progress (Graff).

Instead of endorsing a view of literacy as an independent variable or a neutral set of skills that assumes a single direction of literacy development, as is the premise of the literacy myth and prominent in Western literacy narratives (see Chandler; Eldred and Mortensen; Graff and Duffy; Street), I Am Malala promotes literacy as a collective, universal achievement situated within a cultural ecology of literacy that is inextricably linked to social, cultural, and political power structures and contexts.

Read more of Alexander’s analysis of Yousafzai’s memoir in the full College English article, “Forwarding Literacy in I Am Malala: Resisting Commodification through Cooperation, Context, and Kinship.”

Kara Poe Alexander, NCTE member since 1998, is an associate professor of English in professional writing and rhetoric and director of the writing center at Baylor University. Her research explores literacy, identity, and writing pedagogy within composition settings.