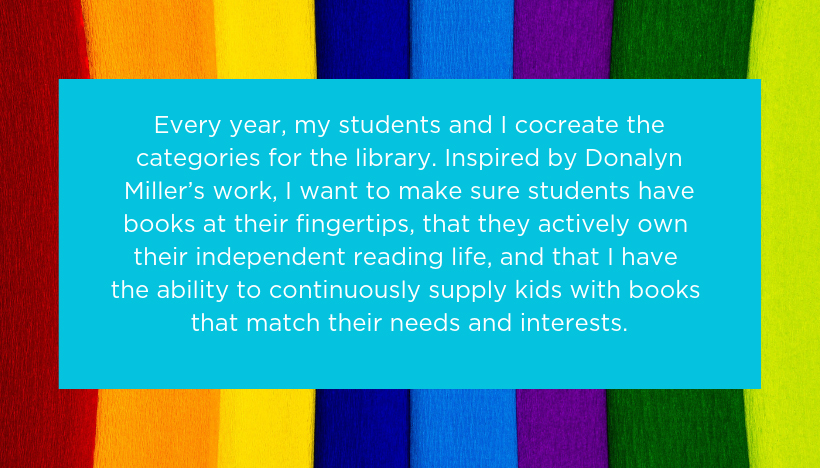 This blog was written by Rick Joseph, a member of the NCTE LGBTQ Advisory Committee.

As a fifth and sixth-grade teacher, I let my students know that they are welcome, no matter who they are. There is a sign hanging outside my door that declares my classroom to be a safe space for all people. I emphasize this principle on the first day of school by reading the nonfiction book I Am Jazz aloud to my students. The story chronicles the life and transition of Jazz Jennings, a transgender girl. The theme of the story, “Be who you are” resonates with everyone and establishes an atmosphere that is welcoming and inclusive.

This ethos is embodied in our classroom library. Every year, my students and I cocreate the categories for the library. Inspired by Donalyn Miller’s work, I want to make sure students have books at their fingertips, that they actively own their independent reading life, and that I have the ability to continuously supply kids with books that match their needs and interests.

Caitlin Ryan and Jill Herman-Wilmarth’s book Reading the Rainbow reminds me it’s time for all classroom and school libraries to have an LGBTQ genre. I knew I needed my students to understand and own the creation of this genre so they would utilize it.

I began by asking them to consider groups of people who have been treated unfairly in our country just because of who they are.

Last year, they created a list which described people from multiple marginalized groups. I then asked them to consider this question, “How would hearing stories about the lives of people from these groups help all people understand them better?” The students quickly reached agreement that stories build empathy and that empathy changes people’s hearts and minds.

The one group that had not been mentioned on our list was LGBTQ people. I asked students if they had ever heard anyone make fun of somebody because they were LGBTQ or thought to be LGBTQ. They all raised their hands. At that point, I reviewed some age-appropriate definitions of “LGBTQ” from the organization Welcoming Schools. I then taught the term “intersectionality,” a concept originated by legal scholar Kimberlé  Crenshaw in 1989, to describe when a person belongs to more than one group of people who have been treated unfairly.

Next, I borrowed a collection of children’s picture books featuring LGBTQ characters from Oakland University and brought them in. I asked my students to work together with a partner and do a book pass, where they examine the book and read as much of it as they can for three minutes. Together, the students were asked to write a response to what they read. The responses ranged from, “This book can show people that being gay or lesbian is okay, and that your parents can be of the same gender” (Heather Has Two Mommies), to “Dresses are okay to wear for everyone”(10,000 Dresses), to “More people can understand that people can love whoever they want to love even if its a boy and boy or girl and girl” (Tango Makes Three), to “Speak up, be who you are” (Morris Mickelwhite and the Tangerine Dress.) The students’ responses validated the presence and utility of the LGBTQ book bin in our classroom library. These stories fulfill a potentially lifesaving role in normalizing the experiences of people who are LGBTQ in our classrooms and in the larger communities beyond our school. Our students, all of them, deserve access to these stories. Rick Joseph is a National Board Certified Teacher and has taught fifth and sixth grade at Covington School in suburban Detroit since 2003. He previously served as a bilingual educator (Spanish) and trainer for nine years in the Chicago Public Schools. Rick was 2016 Michigan Teacher of the Year.