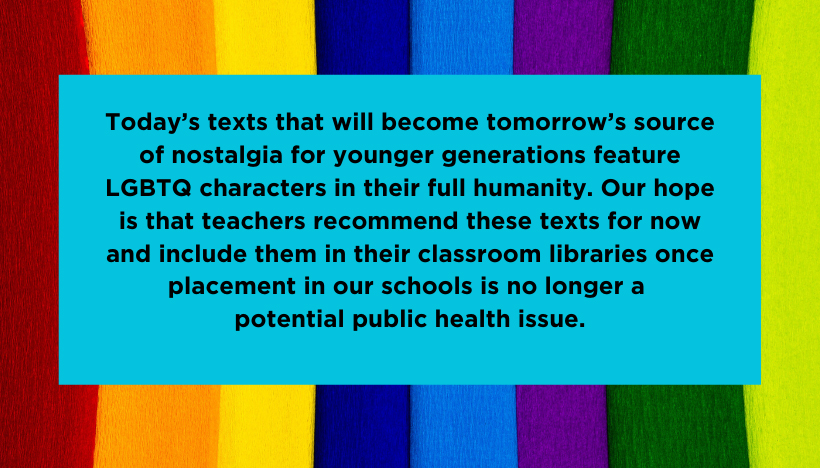 This post was written by Cody Miller and Summer Melody Pennell, members of the NCTE LGBTQ Advisory Committee.

The responsible and effective act of social distancing has centered nostalgia in the types of texts we find ourselves drawn to these past three months. New television shows, movies, and books have found themselves more frequently on our “to watch or read” lists rather than actually being watched or read.

We’ve found ourselves staring at the pile of Harry Potter books on our desks, thinking returning to their pages will bring some type of comfort in these uncertain times. Yet it’s hard for us to separate the books from J.K. Rowling’s recent transphobic remarks, which seem to only add to a growing list of issues we have with Rowling; from her racist handling of cinematic characters to her proclamation of gay characters’ existence without the ability to actually construct gay characters. We want books about magic, but the existence of LGTBQ people shouldn’t require an act of magic or an offhand tweet by the author.

Summer detailed LGBTQ science fiction and magical realism young adult novels in a post last year. Some releases from the last few years have provided readers looking for magic with authentic and fully-lived queer characters. These books would make great additions to classroom libraries and recommendations for students to read during our time of social distancing.

This year alone has seen a number of magic YAL that centered LGBTQ characters. Adam Silvera’s Infinity Son transplants a magical world with a hierarchy of magic users onto our modern day. Characters use social media to engage in social movements and follow a presidential election. The narrative features several entry points for discussing contemporary political issues in an election year. Meanwhile, Andrew Eliopulous’ The Fascinators injects magic into modern day Georgia. Teenagers wield magic in public and form high school clubs around the use of magic. The characters navigate common trials of youth while also working to combat a group who uses magic for nefarious purposes.

While we’ve focused on books released this year, 2020 is not the first year magical LGBTQ young adult titles have been published.

Malinda Lo’s Huntress involves cataclysmic weather and a fairy kingdom. Corinne Duyvis’ Otherbound includes princesses, magic, and a mysterious connection between the two main characters. Duyvis is the author who coined the phrase #OwnVoices. Rainbow Rowell’s Wayward Son, the sequel to Carry On, takes the characters on a road trip through the US where they encounter many magical creatures, including vampires in a NXIVM-style cult.

There are also recent releases that combine magic with historical fiction like Anna-Marie McLemore’s Dark and Deepest Red, which takes place both in contemporary times as well as 1518 Strasbourg, drawing on the fairy tale of the red shoes. Another book with magic and a nod to the historical American west is Charlotte Nicole Davis’s The Good Luck Girls. The main character does not show any romantic interest (though Summer is holding out for a lesbian romance in a sequel), but there are lesbian secondary characters.

A slightly older book with a secondary queer character, Katherine Locke’s The Girl with the Red Balloon, follows present-day Ellie Baum, who is transported to 1988 East Berlin when she grabs a balloon while on a field trip to the Berlin Wall Memorial.

Journalist Pankhuri Shukla suggests the nostalgia for pop culture of our youth is a “coping mechanism amidst a global pandemic” to help maintain a sense of normalcy. Sadly, many of those nostalgic texts (including magical ones like the Harry Potter series) deny LGBTQ people a space in the chronological imagination. Fortunately, the selection of today’s texts that will become tomorrow’s source of nostalgia for younger generations feature LGBTQ characters in their full humanity. Our hope is that teachers recommend these texts for now and include them in their classroom libraries once placement in our schools is no longer a potential public health issue. 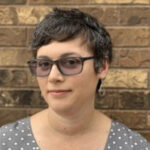 Summer Melody Pennell is a member of NCTE’s LGBTQ Advisory Committee and is the current chair of NCTE’s Genders and Sexualities Equality Alliance (GSEA). She is an assistant professor of English education at Truman State University where she works with preservice English teachers and also teaches an undergraduate LGBTQ+ YA Literature course for all majors. She can be contacted via email at spennell@truman.edu and found on Twitter @summerpennell.